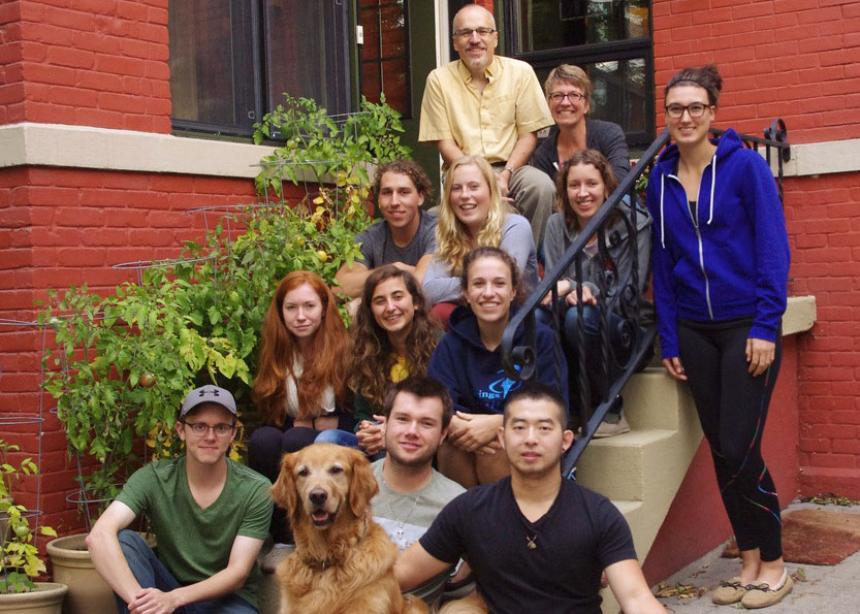 <p>Emmaus House is an intentional community for university students in Winnipeg made up of 13 people. (Photo courtesy of Emmanus House)</p>

When Davis Plett was considering moving out of his parents’ home, he wasn’t sure he was ready to be on his own. Moving into a 103-year-old house with 12 other people seemed like a good option.

“The danger of meeting new people and then having the additional risk of living with them excited me,” says Plett, 21, who studies English literature at the University of Winnipeg.

He is one of 13 people currently living in Emmaus House, an intentional community started by Rod and Susan Reynar. Inspired by their Anabaptist-Mennonite faith, the Reynars created Emmaus House with the vision of creating a place where university students can find support academically and spiritually, in lives of service, healthy living and relationship.

The Reynars began accepting applications a year ago and the first residents moved in late last August, just in time for the start of the school year. In addition to Rod, Susan and their 18-year-old daughter, Joya, a Grade 12 student at nearby Westgate Mennonite Collegiate, 10 university students live in the community. (Anika, the Reynars’ eldest daughter, is one of them.) Some are UofW students, some are Canadian Mennonite University (CMU) students and a few study at the University of Manitoba.

Over the past six-and-a-half months, the residents have learned a lot about what it means to be a community, and they have had a lot of fun along the way.

Joey Braun had lived in a few different community settings before moving into Emmaus House. A student at CMU, the 21-year-old had participated in the school’s Outtatown discipleship program and then spent a year living in CMU’s residence, both experiences that required him to live in close proximity to a variety of different people.

When he applied to live in Emmaus House, he was hoping living in the community would continue to stretch him. There are a number of benefits to living in Emmaus House, he says. The first that comes to mind is eating: Members of the community have committed to eating supper together every evening. Community members work in pairs and are each responsible for preparing one meal each week and then cleaning up after it.

“It’s a pretty cool experience sitting and eating with 12 other people,” Braun says. “It’s like a Lord’s Supper every day.”

After just a few minutes in the dining room at Emmaus House at supper time, one quickly sees the bond the residents have formed as they talk and laugh after a day of school and work. When asked about the best part of living in commu-nity together, they tell stories of the support they get from one another. In addition to eating together daily, the 13 spend an evening each week in worship. They have also gone on weekend retreats together, so by now they know each other well.

Anika recalls coming home during a particularly stressful week of school. Sensing her stress, one of her housemates had taped a large picture of a smiley face onto her bedroom door with the words “I found your smile” written underneath it.

Plett has a similar story. A lover of puns, he came home one day to find someone had left a sheet of paper taped to the calendar in his room. The bottom quarter of the page was divided into a dozen small strips that could be torn off, each with a different pun written on it. “These are tear-able puns” was written on the paper. “To me, that’s the familial aspect of this,” he says. “We’re not strangers anymore.”

Louisa Hofer, a 20-year-old CMU student, agrees. “When my friends come to visit and then leave, they say, ‘Wow, your relationship with your roommates is so vastly different than mine,’ ” Hofer says. “ ‘This looks like a home.’ ”

As with any home, there are challenges. The majority of them are the small things that arise when living in a house with 12 other people: sharing common spaces, making sure you clean up after yourself so as not to inconvenience anyone, and navigating the conversation if a conflict does arise.

Confronting people directly can be difficult, but is ultimately worth it, according to Anika. “I’m learning to actually talk to the person, instead of talking about it with other people,” she says.

For Plett, conflicts have led to self-reflection. “You end up finding out things about yourself that you need to process,” he says.

Rod adds that, for him, that sort of self-reflection is one of the key benefits of a living situation like Emmaus House. “I like living in community because it doesn’t allow me to get set in my ways,” he says.

One thing that has affected the community is Rod’s health. Rod has arachnoiditis, a neuropathic disease caused by inflammation of membranes around the spinal cord. He lives with excruciating pain daily. That pain worsens if he pushes himself too hard at work—he holds a Ph.D. and teaches on a volunteer basis at CMU—and means that he misses time with the community because he needs to rest in bed.

“I find how he goes through his day incredibly inspiring,” says Kelsey Wiebe, a 20-year-old CMU student who moved into the house from his hometown of Brooks, Alta.

Braun agrees, saying, “I found that Rod is tougher than I expected. He never complains.”

Indeed, when Rod is asked what the challenges of living in the house are, he has a positive response. “The challenges haven’t seemed that great,” he says. “That’s not what I think of right away.”

Instead, he thinks about the relationships that have been formed. “Everyone in the house, I think, has connected in meaningful ways,” Rod says. “For me, that’s been really important.”

Susan agrees. “With 13 people, it’s enough that if someone’s looking for something to do, there’s always someone there to do it with,” she says. “We’re all looking out for each other.” 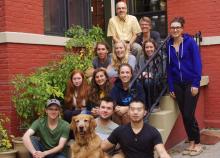 Emmaus House is an intentional community for university students in Winnipeg made up of 13 people. (Photo courtesy of Emmanus House) 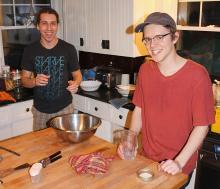 Kelsey Wiebe, left, and Davis Plett clean up after supper one evening. Members of the Emmaus House community eat supper together daily. (Photo by Aaron Epp) 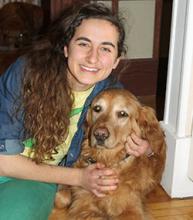 Emmaus House community member Louisa Hofer, with Remy, one of two dogs that also live in the house. (Photo by Aaron Epp) 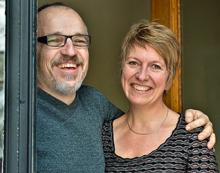 Rod and Susan Reynar are glad they have opened their home for Emmaus House. (Photo by Matt Veith) 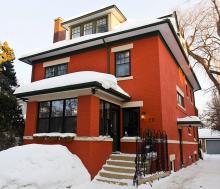