‘There is a community of young people here’

Young adults reflect on their experiences at Assembly 2014 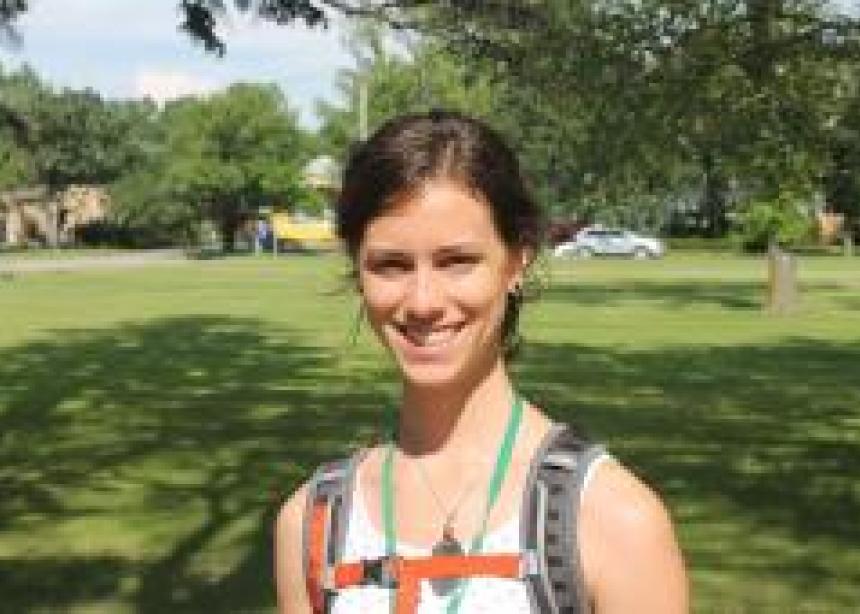 More than 50 people between the ages of 18 and 30 attended the four-day event, nine of whom were interviewed about what they saw and heard:

This was Alyssa Bender’s third assembly, having attended the 2012 assembly in Vancouver and the 2005 MC Canada/MC U.S.A. event in Charlotte, N.C.

While BFC and Future Directions interest her, Bender said she is paying close attention to what she sees as deeper theological shifts within MC Canada. “Sometimes I feel like we might be minimizing the importance of Christ in light of the decisions we’re making,” she said. “It seems more analytical and emotional, as opposed to Spirit-driven.”

When it comes to what is going on at the MC Canada level, Bender said most of her church-going friends are unaware. For her, paying attention to MC Canada happenings is the result of always having been involved with the wider church. Her excitement about the kingdom of God is also a reason she goes to assemblies.

“I have a passion for salvation and evangelism,” she said. “The message of Christ needs to get out. I guess I see the Mennonite church as a mega-microphone, and I want a voice in that microphone.”

Ben Borne loves the Mennonite church. He has attended many national church assemblies, but this year he came to honour a commitment he made in Waterloo in 2011. Three years ago he introduced the Harmony motion, a resolution that proposed welcoming and including lesbian, gay, bisexual, transgendered and other members of the queer (LGBTQ) community into churches at the local, provincial and national levels. It garnered a lot of support and ushered in the BFC process.

Borne said he comes to assembly to express his love for the church, but also to serve as a reminder that LGBTQ people aren’t the “other,” that they’re at assembly and in the pews at church. He said it’s especially important for him to attend assembly because there are no LGBTQ voices on the BFC Task Force.

“The church says they’re listening to LGBT[Q] voices because they’re listening on the congregational level, but I think the task force needs to intentionally seek out those voices for input, debate and engagement,” he said.

This was Clare Schellenberg’s first time attending assembly, and she was drawn in because of the theme of “Wild hope.” “It’s an important theme for the church, to step into stormy waters and embrace the uncomfortableness of issues,” she said. “We don’t do that enough.”

Schellenberg participated in the worship services and attended a BFC plenary session. It was particularly important for her because she identifies as a lesbian and is in a committed same-sex relationship.

Although she appreciated the church discussing it, she felt that the conversation could have started with storytelling. “It would be a good opportunity to have storytelling, listening and a chance to ask questions,” she said. “There needs to be a connection [to LGBTQ people] or story told to answer them.”

Gabrielle Wiebe graduated from Canadian Mennonite University with a bachelor of music degree last year and she misses learning and worshipping with Mennonites from across Canada. This was one of the reasons she was excited to serve as a delegate for her home church at assembly.

Although it was her first time attending, she said she was eager to participate in the BFC dialogue. “I’m longing to be part of a church where my friends who want to work and serve in the church, can do so,” she said. Wiebe encourages more young adults to participate and benefit from the opportunities to meet people from across the Canada.

“We’ve had good conversations at the end of the day when we debrief,” she said.

The conversations she had with fellow delegates at her table during plenary sessions were also meaningful for Wiens. “It’s a wonderful opportunity to get together and have these discussions,” she said. “It’s a space to share your perspectives in a safe, non-judgmental way.”

Pierre-Joël Koop and Rebecca Steiner were the most popular couple at assembly. During one of the plenary sessions, the emcee noted that the pair had just gotten married on June 28, and thus were spending their first week of marriage at the church gathering.

Steiner said the couple wanted to attend because of her involvement as a member of the Future Directions Task Force, but also because of the positive experience she had at her first assembly in Vancouver two years ago.

The worship music and BFC discussions stood out as highlights, and Steiner is interested to find out what delegates wrote down as they imagined the future of the church during plenary sessions related to Future Directions.

“We were hoping to get people to think outside of the box,” she said. “I think [those conversations] went well.”

Stacy Peters is a CMU student, but the call to participate in the assembly drew her back to Winnipeg during her summer break from school. One of the big reasons she wanted to attend was because there are just a handful of Mennonite churches in her area church. “I wanted to experience the larger church,” she said.

Like many of her peers, the worship was a highlight, as well as the chance to talk about sexuality. “In my congregation, [sexuality] doesn’t get discussed,” she said. “It’s important and we need to talk about it.”

Tim Wenger has been to each assembly since Edmonton 2006 where, to the best of his knowledge, he was the only delegate under the age of 18. “I love being a part of our wider church body,” he said. “[Assembly] helps you realize that the church isn’t just a small group of people, but God’s kingdom is growing throughout all of Canada and the world.”

One of the biggest highlights for Wenger were the discussions regarding Future Directions. “Even though things are changing, it’s exciting to see people have hope for the future as well,” he said, adding that he encourages young adults to come to the next assembly. “There is a community of young people here, even if it isn’t as apparent as the older generations.”