A ‘small protest’ they call home 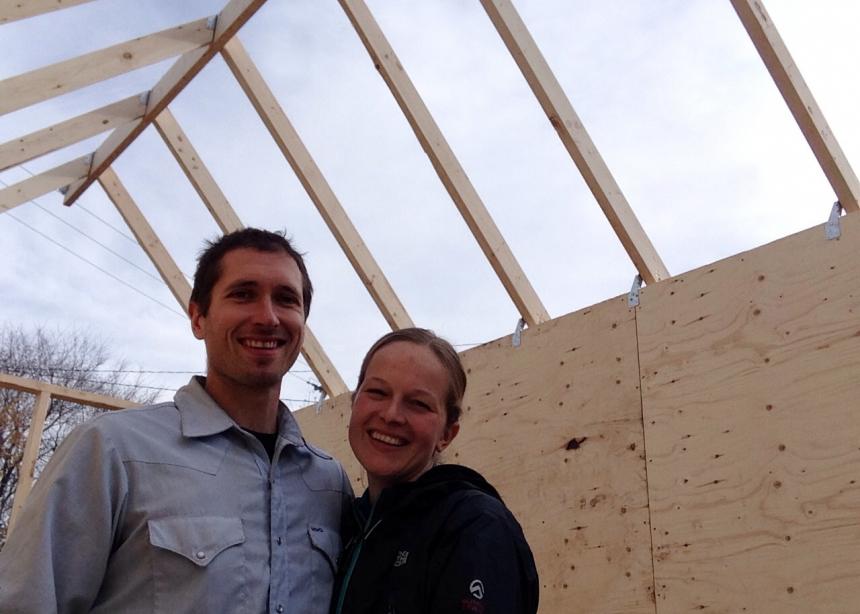 <p>&ldquo;We know our lifestyle in North America far exceeds what the rest of the world enjoys. Building a tiny house is a small protest against that,&quot; say Jared and Rachel Regier. (Photo courtesy of Rachel and Jared Regier)</p>

Newlyweds Jared and Rachel Regier are building a new home in Saskatoon . . . and it’s no bigger than a garage.

The couple, who attend Nutana Park Mennonite Church, call it their “tiny house.” Jared, 35, designed it, and he and Rachel, 29, are building it from the ground up, all 14 square-metres (150 square feet) of it.

The Regiers’ new house will feature solar panels to generate all their power. Jared calculates that it will produce about double the amount of energy they will need, which will allow them to sell the excess energy to Saskatoon Light and Power.

Many people think their decision is weird, but the Regiers think it’s pretty normal, at least by global standards. Sixty-five percent of the world’s population lives in less than 19 square metres per person.

“To live in a house that’s a little under 150 square feet, we’re in that norm,” says Jared. “What makes it seem outrageous is that we’re doing this in the middle of this North American culture.”

Jared and Rachel met when they co-taught the Earthkeepers program at Aden Bowman Collegiate in Saskatoon. It’s a Grade 10 program that focusses on sustainable living and active citizenship. The Regiers say they felt like their actions weren’t in line with the messages they taught their students.

“I’ve always felt guilty living in a house that consumes energy because we know the technology is out there to not do that anymore,” Jared says. “We know our lifestyle in North America far exceeds what the rest of the world enjoys. Building a tiny house is a small protest against that.”

The Regiers’ tiny house will feature everything a normal house has, but in one compact space. However, they will not own a fridge, dishwasher, washer or dryer. They feel they can live without those luxuries. They will use a composting toilet and a sink with a hand pump.

The Regiers say they want to spread the message that living sustainably isn’t that difficult or expensive. The whole house will cost less than $16,000, with many of the building materials reclaimed from old job sites. The most expensive part are the solar panels, which cost around $6,000. That’s less than most people spend on renovating a house or adding an addition on to their home.

The Regiers want to care for creation and live simply, and their new home meets both of those goals. Rachel says she and Jared want to spend less time working for things they don’t need, so they can spend their time and money more intentionally.

The tiny house is also is in line with their Mennonite theologies.

“If I believe that everyone in the world deserves what I deserve, I shouldn’t take more than what’s allotted for me,” Rachel says. “When I take more than my fair share, that literally takes it away from someone else.”

Rachel worries that Christians compare themselves to others. If they meet the status quo, that’s enough, and they won’t strive to do more. “Being a Christian isn’t about comparing ourselves to whoever else, and saying, ‘I’m okay because I’m better than so-and-so.’ It is about the best that I can do and the best that I can offer,” she says.

“The best I can do is build a tiny house,” adds Jared.

Jared and Rachel say they likely won’t live in the tiny house forever, but they want to continue being intentional about living as simply and as sustainably as possible.

Architecturally minded people like Jared aren’t the only ones who can enjoy a tiny house, however. Companies like Tumbleweed Tiny House Company host workshops, and sell house plans and ready-made homes for people looking to downsize.

For more on stewardship of the Earth see:

"People can do this" 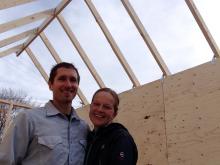 “We know our lifestyle in North America far exceeds what the rest of the world enjoys. Building a tiny house is a small protest against that," say Jared and Rachel Regier. (Photo courtesy of Rachel and Jared Regier) 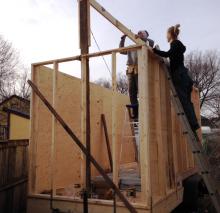 Jared and Rachel Regier are in the process of building their tiny house. (Photo courtesy of Rachel and Jared Regier) 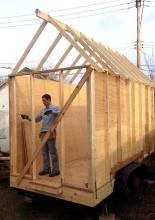