‘Over and over again, day by day’ 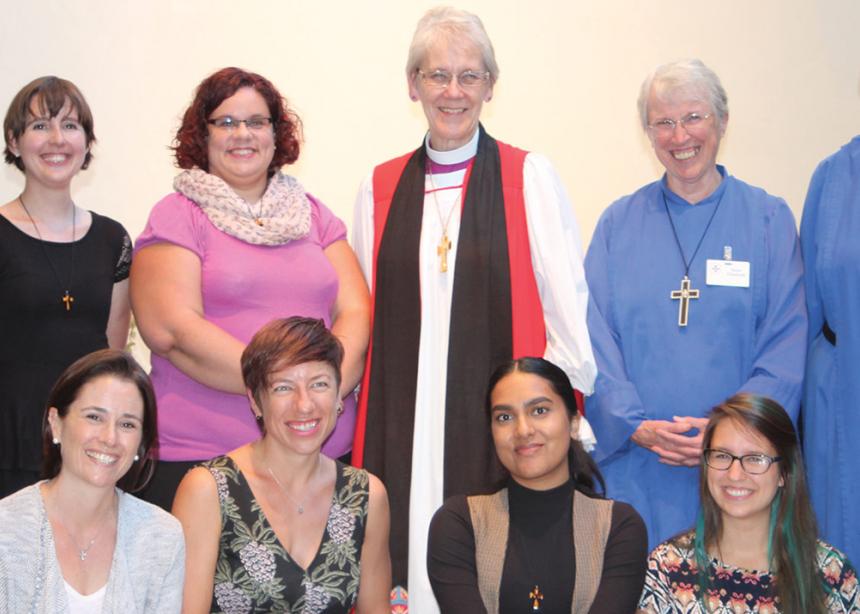 Sarah Moesker, front row right, and her fellow companions share the daily rhythm of the sisters’ life. (Photo courtesy of the Sisterhood of St. John the Divine)

When Sarah Moesker began asking herself how she could deepen her faith, living in an Anglican convent for almost a year was the answer.

Moesker, a student at Canadian Mennonite University (CMU) in Winnipeg, spent September 2016 to the end of this past July in the Companions on the Way program, during which she and a group of other young women lived in residence alongside members of the Sisterhood of St. John the Divine in Toronto.

Throughout their time at the convent, she and her fellow companions shared the daily rhythm of the sisters’ life by engaging in regular prayer, Bible reading and reflection. During the day, companions focussed on study and work projects.

Moesker, who is originally from Rocky Mountain House, Alta., said in an email interview that her biggest reason for participating in the program was an inarticulate sense that she needed to.

“In addition to that, though, there had been a growing awareness in me that information was not enough to sustain or deepen my faith [perhaps an obvious thing, but not to me at the time],” the 25-year-old said. “Reading to know the right words and definitions to articulate my beliefs and theological standing was interesting, but was lacking something for me.”

Acting out a rhythm of being that oriented itself around prayer seemed to be the answer. “I needed practices, embodied expressions of prayer and faith,” she said. “I knew I needed to be taught through doing—needed to immerse myself and let my body learn how to live a balanced and contemplative life by doing it over and over again, day by day.”

On an average day, she woke up at 6 a.m. and spent two hours in personal prayer. After breakfast, the companions and sisters spent a half-hour in collective prayer, followed by “conference,” during which the sisters would say what they were doing for the day.

Afterward, everyone dispersed to their various work assignments for the morning. Moesker spent the first half of the program working in the convent’s kitchen and the second half providing pastoral care at a nearby hospital.

At noon, the sisters and companions reconvened for communion and lunch. After an hour rest time, everyone went back to their work assignments. Evening prayer began at 5 p.m., followed by supper and then after-supper clean-up.

After a short break, everyone gathered for community time at 7 p.m., followed by the Compline (night prayer) at 8:10. Compline ended at 8:30, and companions were expected, although not forced, to be in bed by 10 for adequate rest.

All but one meal each week was eaten in silence. A “greater silence,” during which convent inhabitants were not supposed to talk to one another, except under special circumstances, began at 9 p.m. and ended at 9 the next morning.

“Good and hard are the two words I ascribe to the 11 months; the goodness and the difficulty of it being completely entwined,” Moesker said. “The difficult and best part simultaneously was living in community. I had no idea what I was doing, and so learned several things about healthy boundaries, interaction generally, and a great many things about my own needs in relation to others.”

One of the hardest things was the fullness and restrictiveness of the schedule, “despite it being exactly what I needed at that time,” she added. One of the biggest highlights of the year was living a prayerful, contemplative life with others. “It was good to pray together and share silences. I will miss that most of all.”

Spending a year in the Companions on the Way program has influenced Moesker’s faith by putting more impetus behind her spiritual practices. “I am convinced now not only of the necessity of them, but of their cumulative joy,” she said. “I think, too, that living out my faith in such a way this past year has helped me experience it as simply a part of me, part of living—like breathing. It’s not just an addition, perhaps not even an option. It just is, and I can attend to it or not.”

Participating in the program changed her in many ways. “I’ll have to reflect on the effects for quite some time to come, I think, but I already know that it contributed a balance and stability to my life that wasn’t there before,” she said.

“I’m not suggesting that going to a convent or monastery is necessary for learning how to have a prayerful life,” she added, “but it was exactly what I needed.”

Sarah Moesker, front row right, and her fellow companions share the daily rhythm of the sisters’ life. (Photo courtesy of the Sisterhood of St. John the Divine) 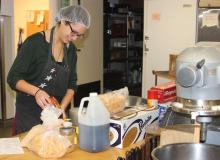 Sarah Moesker spent the first half of the Companions on the Way program working in the convent’s kitchen. (Photo courtesy of the Sisterhood of St. John the Divine)

One of the biggest highlights for Sarah Moesker, front row second from left, was living a prayerful, contemplative life with others. (Photo courtesy of the Sisterhood of St. John the Divine) 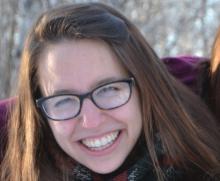 Sarah Moesker describes her time living in an Anglican convent as ‘good and hard.’ (Photo courtesy of Sarah Moesker)