People who want to love their indigenous neighbours must first learn to love themselves, according to Dr. Patricia Vickers, a psychotherapist and Tsimshian theologian. Vickers spoke at an event organized by Mennonite Church Manitoba on how churches can respond to the calls to action made by the Truth and Reconciliation Commission. About 50 church leaders attended the event, held at Circle of Life Thunderbird House in Winnipeg on Oct. 17, 2015.

Norman Meade, co-pastor of Manigotagan Community Fellowship, opened the event with a smudge and prayer. “All of you here today are coming with a spirit of listening and questioning, a spirit of love,” he said.

But before Mennonites do the work of righting injustices, they must look deeply within themselves, Vickers said during her reflection: “Christ says not simply to protest injustice and oppression, to demand justice for your indigenous neighbour. . . . He goes further than that. He says to love your neighbour. But don’t you know that in order to love your neighbour you must first learn to love yourself?”

There is no question that justice needs to be done, Vickers said, and there is plenty of work churches can do to help heal the wounds left by colonization and residential schools. The child welfare system, the education system and mental health services all need to be reformed to better serve indigenous people, she said.

But first comes the work of inner transformation.

“I say, never mind decolonization,” Vickers told those assembled. “Why? Because colonization was a spiritual act, and anyone who knows medicine will tell you that a spiritual act can never be reversed. It can only be transformed.”

Vickers described growing up in a dysfunctional home full of abuse and alcoholism—fallout from her father’s and grandmother’s experiences at residential schools. “As a family, we didn’t reverse that,” she said. “What happened is, as a family we turned our hearts and our lives to a God who is mysterious.” For her family, that spiritual transformation included traditional ceremonies such as sweats and fasting.

Vickers also told stories of people she had counselled in her practice as a psychotherapist:

So how do people learn to love themselves? By examining their thoughts, emotions and the communication of their bodies, Vickers said: “Those who believe in teachings of Christ must continuously open our hearts and minds to the light of truth. Then you will see clearly what needs to be done to love your neighbour.” 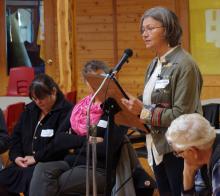