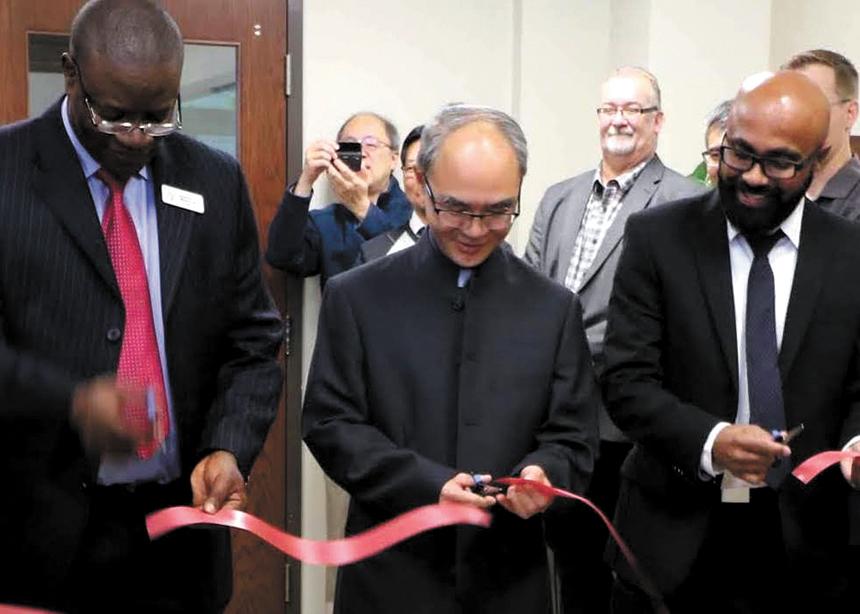 After more than three years and with a budget of $1.4 million, Hagerman Mennonite Church in Markham, Ont., has completed a significant building renovation. But more than efficient space and a sleek exterior, the project represents the power of this church, a diverse partnership of different congregations, to work together as the body of Christ to accomplish big things as a community.

Hagerman Mennonite was started in the 1930s in what was then a small hamlet called Hagerman’s Corners. In the decades since, the community around the building grew with an influx of newcomers to Canada. In 1993, Markham Chinese Mennonite Church partnered with Hagerman. Now, a third partner, Markham Christian Worship Centre, a Tamil congregation, also shares the building.

At a celebration on Oct. 14, 2018, the church unveiled its newly renovated building.

The building had been “getting a little tired,” says James Barber, chair of discipleship at Hagerman Mennonite, who was also a member of the building committee. In addition to regular wear and tear, some aspects of the building didn’t fit congregational needs. He notes that congregants were visiting after services in a long, narrow room that he likened to a bowling alley.

Reverend Paul Mo, Markham Chinese Mennonite’s pastor, also notes the long lines that would form at the washrooms after the service.

Now a welcoming entrance opens onto a large multi-purpose room with a café, new washrooms and four rooms that can be used for meetings or Sunday school classes, says Hagerman Mennonite’s lead pastor, Roberson Mbayamvula. The church’s two sanctuaries have been renovated, and the whole facility, on one level, is now fully accessible. The changes have “improved our space beyond our hopes and expectations,” he says.

While the renovations themselves took only about eight months to complete, it took about three years for the project to go through the approval process for two levels of government, says Barber. By the time it was approved, building costs in the fast-growing city of Markham had shot up. “We thought we were going to have to cancel [the project],” he says. “But we said, ‘Well, if God has a plan for this, if there was a path, what would it look like?’ ”

They began asking for help, according to Barber, and they got it. “Everyone came through, pretty much to the full extent we asked. And we made outrageous asks,” he adds, noting some people who are not regular congregants came through with six-figure donations.

The two original partner congregations approached the Tamil congregation to see if it would like to be a partner as well, rather than just renting the space. The Tamils agreed, says Barber, “and surprised us with a six-figure commitment as well.”

Between these and other individual donations, as well as support from Mennonite Church Eastern Canada, they “found a way to make it work.”

With all this generous support, Barber says the church has almost no debt from the project. “We’re a small church. Our numbers aren’t that big,” he says, estimating that each church would have between 30 and 40 people. “We’re not huge churches, but we’re active churches, we’re healthy churches, and we’re trying to figure out how we grow and how we be more relevant to our community.”

The pastors of the congregations agree that the church’s diversity is its strength.

Mbayamvula says the church feels called to be “a church in Markham that looks like Markham,” adding in an email: “Although each group has its own identity, we look forward to exploring ways that we can do ministry together in the future and to become the church that God wants us to be in our community.” He noted that with three culturally diverse churches in one building, “potlucks are amazing.”

Mo notes that not only does the one building hold three different languages of worship, members within the three congregations originally hail from around the world, including Africa, Hong Kong, Taiwan, Mainland China, South America and Sri Lanka. “The Bible supports diversity in the body of Christ,” he says, quoting Romans 12:5: “ ‘We, who are many, are one body in Christ, and individually we are members of one another.’ We are both individuals and at the same time members of one another.”

The three congregations have formalized their partnership with a covenant agreement, Mbayamvula says, which means they will be more viable financially and have more opportunities to work together in ministry. 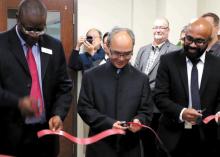