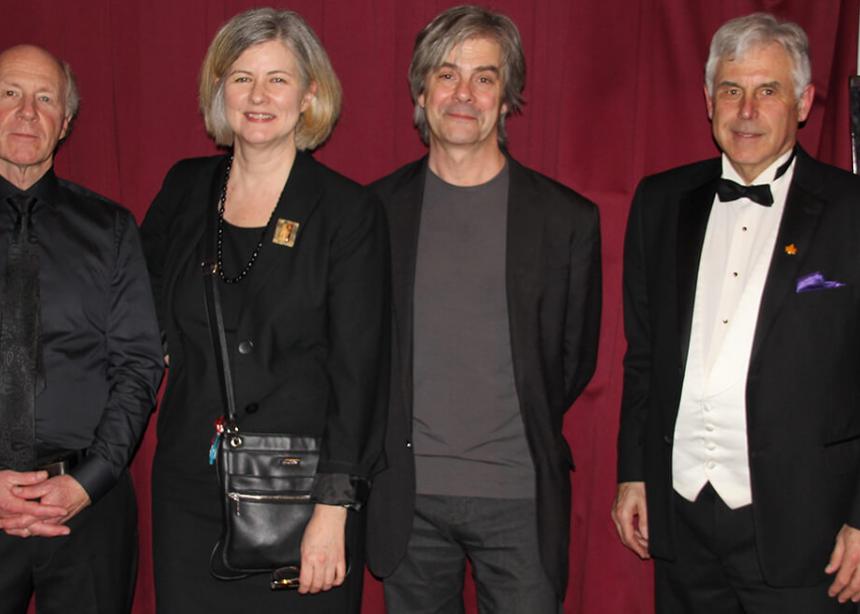 Pictured from left to right: Paul Pulford, who conducted the orchestra in Glenn Buhr’s ‘Piano Concerto No. 3; Stephanie Martin, who composed ‘Babel: A Choral Symphony’; Buhr; and Lee Willingham, who conducted Martin’s piece, at the April 3 world premiere of the two works as part of the 40th anniversary of WLU’s Faculty of Music on April 3, 2016. (Photo by Dave Rogalsky)

Wilfrid Laurier University (WLU) celebrated the 40th anniversary of its Faculty of Music with a concert on April 3, 2016, that featured the premiere of works by two composers with Mennonite roots and connections.

Glenn Buhr, WLU’s professor of composition and director of the Improvisation Concerts Ensemble, comes from Mennonite roots in Gretna, Man. His grandfather left the Mennonite church to join the Canadian military in the First World War; besides that, he married outside the faith and became a lawyer, basically sealing his outsider status.

Buhr often notes that he seems to struggle with similar issues as his grandfather and to exhibit similar beliefs. The insider/outsider feeling is common among artists, especially ones who create at the vanguard of their profession and society. Buhr’s music, infused with jazz harmonies and rhythms, as well as 21st-century leaps in dynamics with dips into sources as diverse as Stravinsky, Prince, Bach, and jazz greats Thelonious Monk and Duke Ellington, is not easy-listening music.

But, at the same time, Buhr notes that his grandfather’s honesty about what he believed resonates with him, saying he has toyed with joining a Mennonite congregation. The pianist at the concert playing Buhr’s “Piano Concerto No. 3” (2015), Kennan Reimer-Watts, attends a Waterloo Mennonite congregation and Buhr appreciates the support its members give Watts.

Buhr’s piano concerto, a symphonic piece in three movements with a featured solo instrument, begins with a movement based on variations of “Same Old Sorrow,” a song Buhr wrote a number of years ago as a parody of the jazz standard, “You Don’t Know What Love Is.” The second movement brings the piano forward almost to the point of improvisation. Buhr says he sees this movement as “centring, quiet, circling down.” The last movement is based on a chord progression from Monk in his song “Bemsha Swing”; it has a clown-like bass line and repeats it in 21 variations.

The concerto was commissioned by WLU professor emeritus Ralph Elsaesser, who passed away before this performance.

The second piece was written by Stephanie Martin, musical director for the past 19 years of the Pax Christi Chorale, and also a professor of music at York University, both in Toronto.

She writes in the notes to “Babel: A Choral Symphony,” that the commission to write this piece came as she; her dad Abner Martin, founder of Menno Singers in the Waterloo Region; and members of WLU’s music department were listening to the Penderecki String Quartet from WLU play one of Bartok’s string quartets. Sealed with a handshake, the commission gave her something to focus in the dark time after the untimely death of her husband.

Martin, an alumna of WLU, composed music to “Babel,” a poem written by her sister Carol Martin from the point of view of the builders of the tower in Genesis 11. Instead of trying to somehow storm heaven, the builders are artists, creating a work of wonder out of their God-given creativity. When God destroys the tower and confuses their language, they are shattered, confused and very, very angry. The poem ends with humanity wondering, “Why did God grant words at all?” and deciding to go on creating art that God “can’t abhor.”

In setting this to music Martin used six movements. In the first, a tower of metal garbage cans and other metal containers crash in a cacophony of smashing sounds. The tower was created by the percussionists with little guidance from Martin except that much noise is necessary at the “X” in the score. The following movements for orchestra, choir and soloists, take listeners through the aimless wanderings of the people, including an angry tenor aria that is responded to by a lament by the choir. In the fifth movement, the piece turns to resolve, resulting in a joyful conclusion “with the hope that time can turn back, can fetch the age of gold.”

WLU, which appeals to music students from many backgrounds, had four of the 150 student singers find the anger against God unpalatable. In her blog, Martin noted that “some students are boycotting my work since they consider it ‘blasphemous.’ ” The issue was resolved before the performance and three of the four agreed to sing. In many ways, the conflict spoke to the theme in “Babel” of trying to create and finding that not all agree with what is appropriate.

Martin speaks of her spirituality as one based on worship in the church. She feels herself a “citizen of the world,” but very attracted to, and at home in, monastic settings where Gregorian chant and liturgical form support her relationship with God.

Martin will leave Pax Christi in the summer of 2017, in order to have more time to compose and fulfill commissions.

Pictured from left to right: Paul Pulford, who conducted the orchestra in Glenn Buhr’s ‘Piano Concerto No. 3; Stephanie Martin, who composed ‘Babel: A Choral Symphony’; Buhr; and Lee Willingham, who conducted Martin’s piece, at the April 3 world premiere of the two works as part of the 40th anniversary of WLU’s Faculty of Music on April 3, 2016. (Photo by Dave Rogalsky)

The musical tower of Babel that played a key role in Stephanie Martin’s ‘Babel: A Choral Symphony,’ performed at an April 3, 2016, concert in Waterloo, Ont., to celebrate the 40th anniversary of Wilfrid Laurier University’s Faculty of Music. (Photo by Dave Rogalsky) 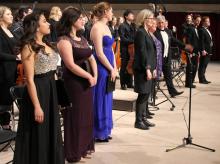 Pictured from left to right: sopranos Midori Marsh and Sarah Amelard; mezzo-soprano Jamie Groote; Stephanie Martin and Carol Martin, the creators of ‘Babel: A Choral Symphony’; conductor Lee Willingham; baritone Dylan Langan; and tenor River Guard stand in front of the Wilfrid Laurier University Choir following the world premiere of the symphony as part of the 40th anniversary of WLU’s Faculty of Music on April 3, 2016. (Photo by Dave Rogalsky)