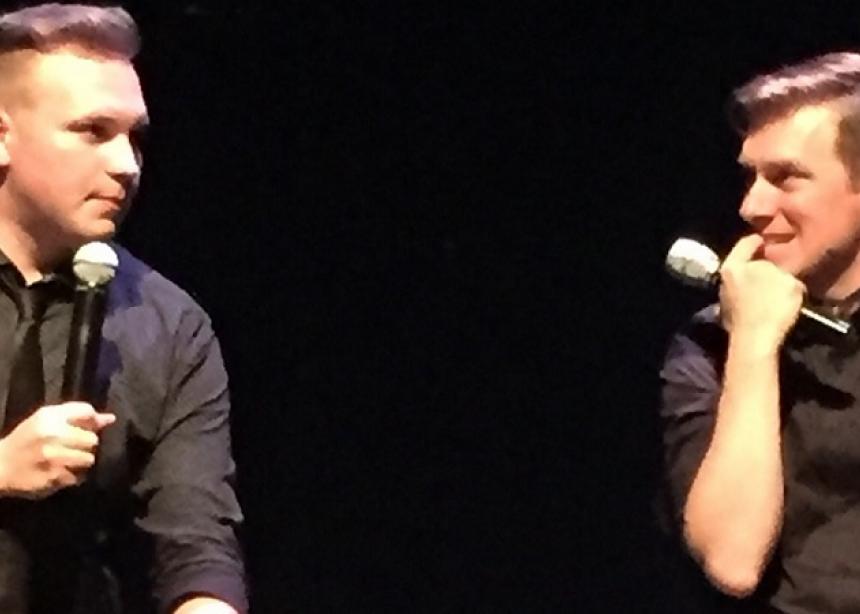 Matt Falk, left, and Orlando Braun answer questions from the audience at the ‘Menno(comedy)nite’ in Abbotsford, B.C., on Sept. 30, 2017. (Photo by Amy Dueckman)

An advertised “evening of hilarity” on Sept. 30, 2017, delivered plenty of jokes, humour and laughs to delight the gathered audience at the Mennonite Historical Society of B.C-sponsored event.

“We need to laugh. There are enough tears in the world,” said emcee Danny Unrau, a pastor, storyteller and author who opened the evening with humorous tales from his personal life and ministry in the Mennonite Brethren church.

After his warm-up, the film That Mennonite Joke made its B.C. premiere. Orlando Braun, the film’s producer, explained the background of the documentary that explores humour in Mennonite culture.

The second half of the evening featured Matt Falk, a Mennonite comedian from Niverville, Man., who travels all over Canada with his stand-up act and who once placed second in the World Series of Comedy. “I’ve never seen this many Mennonites at an event that wasn’t free,” quipped Falk, who performed a routine based on Mennonite inside jokes and self-deprecating stereotypes.

Richard Thiessen, the historical society’s director, explained that the organization had decided to “do something different, to celebrate another part of our Mennonite story.” The event was not a fundraiser, but merely an evening of entertainment.

A Jewish member of the audience, whose wife is of Mennonite background, said he could relate to the humour as the journey of Jews and Mennonites share many similarities.

Matt Falk, left, and Orlando Braun answer questions from the audience at the ‘Menno(comedy)nite’ in Abbotsford, B.C., on Sept. 30, 2017. (Photo by Amy Dueckman)