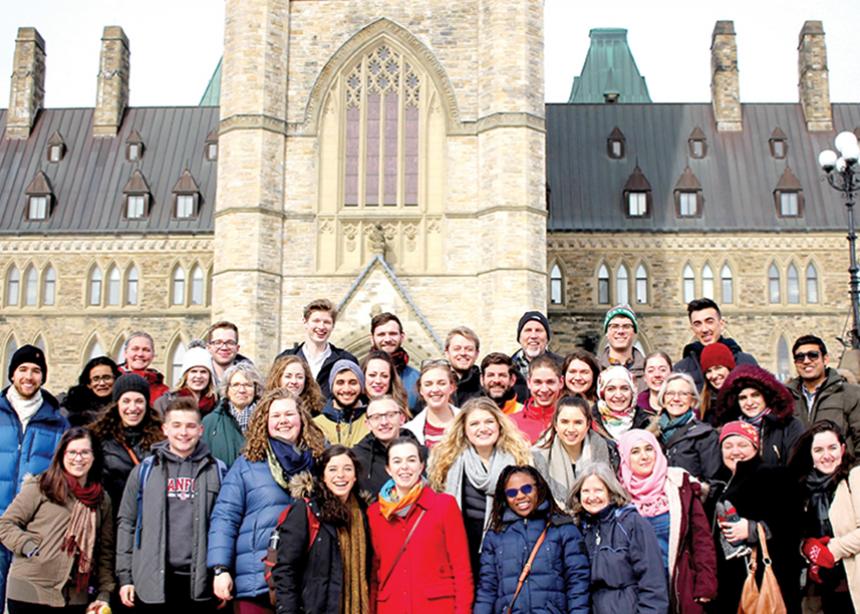 “We want students to learn about the Canadian political process . . . and to present advocacy as an important way to build the common good,” says Esther Epp-Tiessen, public engagement coordinator for the Ottawa Office. The seminar is also an opportunity for students to learn more about MCC and to develop their leadership skills.

The conflict in Palestine and Israel has a long and complicated history. After centuries of persecution, including the Holocaust, the Jewish people yearned for a safe land to call home. Britain, which gained control of Palestine after the First World War, supported the creation of a homeland for the Jews, and in 1948 the State of Israel was created. However, after the Six-Day War in 1967, Israel occupied many more areas of historic Palestine that were not part of the original agreement. Since then, Israel continues to occupy more Palestinian territory, which international law considers illegal. Hundreds of thousands of Palestinians have been displaced and continue to lose their rights. Neither Israelis nor Palestinians live in peace and safety, the students learned.

Rebecca Janzen, a Canadian Mennonite University (CMU) student in her third year of a biblical and theological studies degree, witnessed the conflict first-hand when she travelled to the region on a study tour with CMU last spring. “It feels like it’s a topic that I just latched onto and it feels like I wrapped my heart around it,” she says. “I feel very passionate about it and I can’t explain why. Maybe it’s a God thing,” she says.

Nicholas Warsza is a third-year student double majoring in conflict resolution and international development at Menno Simons College in Winnipeg. In the fall of 2014, he and his family hosted two Palestinian exchange students in their home for two weeks. They shared their life stories and became friends. Later that school year, he travelled to Palestine and Israel with Westgate Mennonite Collegiate and visited them in their own context.

Since then, he has done further research on the conflict. “There are other issues in the world that I could be passionate about, but I think Palestine and Israel speaks to me because Canada is such a close ally [with Israel], so we should be speaking out when our friends and allies are doing things that don’t fit with our values,” he says.

Epp-Tiessen says that MCC promotes advocacy work because it’s important to do as Christians. “Very often Christian organizations are happy to do relief and development work, but more reluctant to do advocacy because that is considered ‘political.’ Yet the Bible offers many examples of people [Moses, Esther, the prophets] who were advocates,” she says. “God is also an advocate for the poor, oppressed and violated. We see advocacy as a faithful Christian response to suffering in our world.”

As a pacifist and a Mennonite, Janzen says she believes strongly in accountability and asking the difficult questions. “What does it mean for Canada to be an ally and friend of Israel, and just a friend of Palestine?” she asks.

The MCC Ottawa Office has been hosting seminars for almost 40 years and started this particular style of seminar in 2005, which focusses on a different subject every year. This year’s focus was chosen because of MCC’s larger campaign on Palestine and Israel called A Cry for Home, which it launched last September.

“The reason that we have that campaign is because MCC’s partners have been pleading with us to be their advocates,” says Epp-Tiessen. “They say that Canadian [and U.S.] policy—especially its uncritical support of Israel [and its policies toward Palestinians]—is one of the obstacles to a just peace in the region.”

Throughout the seminar, students heard a wide variety of perspectives. They listened to Liberal and Conservative MPs; a political science prof at Carleton University; the chair of Canada Talks Israel/Palestine; senior policy analysts; the CEO of the Centre for Israel and Jewish Affairs, a pro-Israel lobby group in Ottawa; Palestinian refugees and newcomers; MCC staff; and other advocates working for peace in the region. Students also toured the Parliament Buildings and attended Question Period in the House of Commons.

With the large amount of material covered, Janzen says the conference could have lasted for a month and they still wouldn’t have run out of things to talk about.

Warsza says that he and his fellow students have a lot to share with their universities, families and congregations as they head back to their homes across Canada. 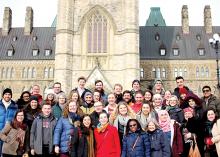 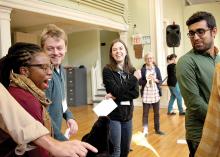