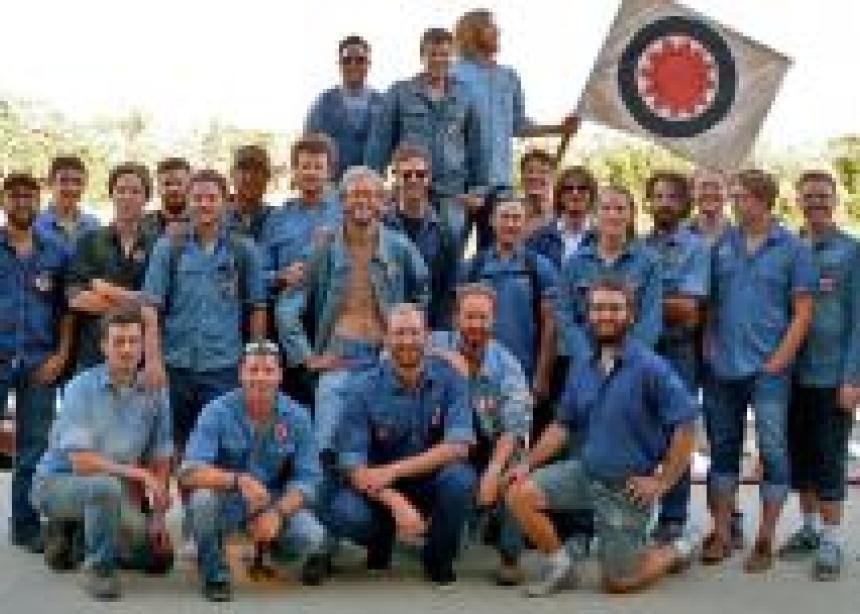 If an outsider were to walk into a Riel Gentlemen’s Choir practice, it would seem to be a combination of an alternative choral experiment, a boy’s club, a Manitoba fan club and a Canadian Mennonite University (CMU) reunion.

It may be like that in many ways, but it’s also a supportive environment for men looking to break free of traditional ideas of masculinity, and a way for these twenty- and thirty-something men to exercise their creativity.

Jesse Krause, 29, is one such individual. He’s the director and a founding member of this denim-clad choir and grew up attending Langley Mennonite Fellowship in B.C.

It all started in 2011, when Seth Woodyard, 31, another founding member, needed an all-male choir to sing for an art installation he was planning, called “Good work.” (See "Bathed in his art," April 16, 2012 issue) He envisioned the group dressed in denim shirts to represent the working class.

Choir members decided they enjoyed singing together so much that they would perform again the next year at Mennofolk, an annual arts and music festival in Winnipeg for people of Mennonite backgrounds. The group is still together, in some form or another, three years later.

And they still wear denim.

“It’s a social equalizer,” Krause says of their attire.

While the choir may have started out because the group had so much fun together—talking together and singing songs over beers—Woodyard believes it’s turned into something much more. He hesitates to call the choir a “fraternity,” because of the negative connotations surrounding the word, but he thinks the camaraderie among the men that has come about over the years is something that only happened because of the choir.

“Within the last year, we’ve started to be more intentional about being a support to one another,” he says. “What really keeps a lot of the guys involved is that it feeds them emotionally and spiritually.”

Another thing that keeps the members together is their mutual interest in the natural world.

Krause, who graduated with a bachelor of music degree from CMU in 2010, writes most of the music the Gentlemen sing. Much of his inspiration comes from Manitoba itself, which means “God speaks” in Cree.

According to another member, Thomas Epp, 28, the Riel Gentlemen’s Choir sings songs that are largely lacking in Canadian music. “We like to sing about these things because there aren’t a lot of songs about Winnipeg,” he says. “Even Neil Young, our most famous ex-pat, doesn’t have any songs specifically about Winnipeg.”

Epp attends Hope Mennonite Church in Winnipeg. While he isn’t a founding member, like Woodyard or Krause, he’s grown up in Manitoba singing in choirs.

Another thing the Riel Gentlemen have carried over from their largely Mennonite background is their work ethic.

The Riel Gentlemen perform at some of the most unique music festivals and venues in the province, including Nuit Blanche, Mennofolk, the Winnipeg Folk Festival, and even at two recent mayoral candidates’ parties.

But that’s not enough for the choir. Members built their own movable music venue last winter. It’s a dome with a steel frame and a denim cover. In order to be more connected to the landmarks they so often sing about, they want to be able to perform near and on the rivers that run through the city.

“We wanted to build a performance space for the river when it’s frozen,” Krause explains, joking, “It’s like a futuristic barn raising.”

The choir is hosting a choral concert on the river on March 1, 2015. Local choirs, including Horizon, Midnight Choir and the Rainbow Community Choir, have been invited to sing in the dome.

The spirit of working together and making things happen—that brought the choir together in the first place—is the same spirit went into building the dome and it continues to bring the choir closer together. 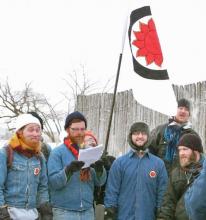