‘It’s time for the next generation to step up’ 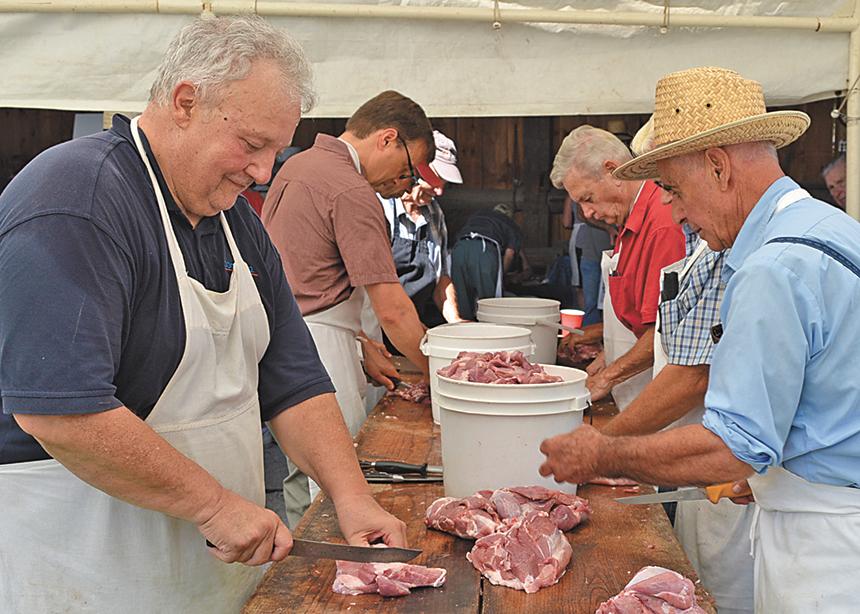 Dave Burkholder, left, and other members of the Pennsylvania German Folklore Society prepare pork shoulder to be seasoned, ground and made into fresh sausages. (Photo by Joelle Kidd)

Despite summer temperatures, the leaves on the trees surrounding Black Creek Pioneer Village were tipped with autumn red on Sept. 15, the day of the annual Toronto Mennonite Festival.

Traditionally known as the Black Creek Pioneer Village MCC Relief Sale, the event began in 1967 and has raised more than $1.3 million.

This year, the festival raised $51,299, according to Karen Heese, the Festival board chair. After expenses, about $50,000 will go to Mennonite Central Committee (MCC).

Several participants in MCC’s International Volunteer Exchange Program (IVEP) also helped clean up and take down tents after the festival.

Seventy-eight quilts were auctioned off this year, bringing in $27,065. A box of chocolate bars that was also auctioned off brought in $200.

Dennis Grey and Anne Nikkels have been helping out at the sale for about 15 years, stationed at the jams and jellies table. “When we were first married . . . the women running the jams and jellies were all in their 60s and 70s,” said Grey. “They were looking a little tired. So we thought, ‘Okay, it’s time for the next generation to step up.’”

Now, the couple gathers their family and friends each year to help at the sale. “It’s great fun, Grey said, adding, “We used to be jams and jellies assistants, now we’re specialists. And now we’re looking to pass it on to the next generation.”

This year, they added a new item to the mix: zwieback (traditional buns). Their table featured a basket stuffed with three styles of buns—one round and plump, another with a second bobble of dough baked on top, and a third twisted to form a braided ring—for 50 cents apiece.

Nikkels helped organize the zwieback baking through a connection with a group of Old Colony Mennonites visiting from Mexico. “We brought all these people together, some from Toronto and some from there, and they taught us how to [bake zwieback],” she said.

Nikkels enjoyed seeing the women empowered by their knowledge as they taught Canadians how to bake the buns. “I think women’s art hasn’t been well appreciated, not in the way men’s work traditionally has,” she said.

She added that the women in the colony don’t usually get together to bake. “They were like, ‘Wow, that was fun,’ ” she said. “Doing something in a group like this . . . to have other people their own age, to chat and talk about how life is.”

The Festival offers a similar opportunity, Grey noted. “Toronto’s Mennonite community is a bit spread out. It’s a big city. So this is kind of like going home. You get to see people you don’t often see, in a nice social setting,” he said.

This is true for Dave Burkholder, president of the Ontario chapter of the Pennsylvania German Folklore Society of Ontario, and vice-president for York County.

“I’ve been coming here since I was 6,” he said. On the day of the festival, he stood at a table before a massive pile of pork shoulder, which he and several others chopped then passed off to be seasoned with salt and pepper, ground and stuffed into sausage casings.

The Society exists to record Pennsylvania German history, stories, practices and folklore, Burkholder said. Proceeds raised by the Folklore Society’s booth at the festival go toward researching and producing its publications, as well as backing some art projects, such as plays mounted by the travelling Canadian theatre company Theatre of the Beat.

Many of the society’s members are also supporters of MCC, Burkholder added.

For him, the event is a family affair. “My mom has chaired the sale here for years.. . . My siblings are all here today, my kids are running the back bacon on a bun [booth].”

Jane Pfeil, visiting with her husband and children, had never been to the Festival before but saw the event on the Black Creek Pioneer Village website. 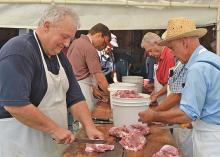 Dave Burkholder, left, and other members of the Pennsylvania German Folklore Society prepare pork shoulder to be seasoned, ground and made into fresh sausages. (Photo by Joelle Kidd) 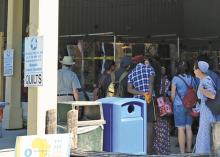 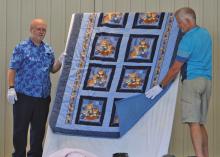 Leonard Dyck, left, and Len Friesen display quilts during the Toronto Mennonite Festival auction on Sept. 15. Seventy-eight were sold for a total of $27,065. (Photo by Joelle Kidd) 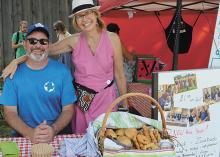 Dennis Grey and Anne Nikkels have been helping out at the Toronto Mennonite Festival fundraiser for Mennonite Central Committee for about 15 years. (Photo by Joelle Kidd)