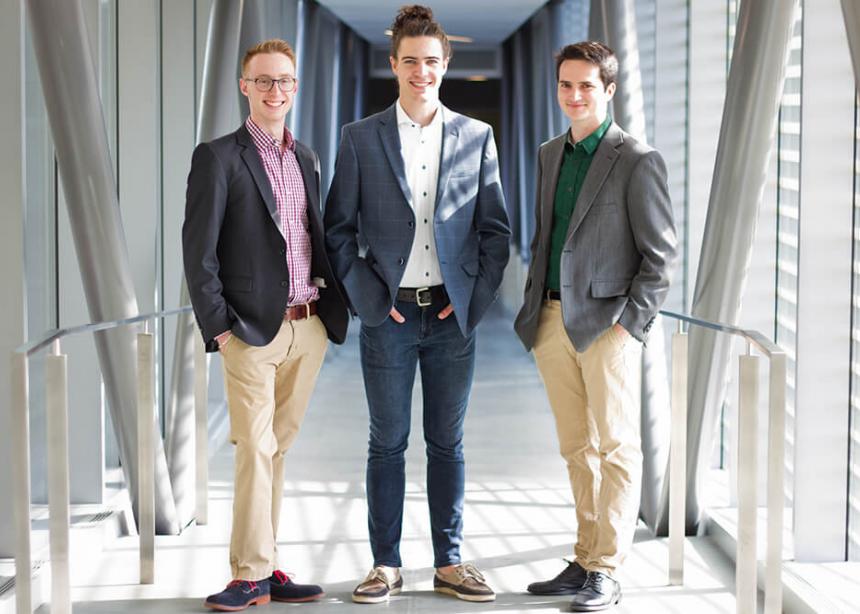 Three recent graduates of the University of Waterloo (UW), Ont., who resided at Conrad Grebel University College, are pouring their energies full-time into their own startup company.

Perry Everett, Graham Thomas and Benjamin Rasera graduated in April and are the founders of Arylla Inc., which aims to bring an end to the counterfeiting industry.

The trade of counterfeit goods costs the global economy around $2 trillion each year, and counterfeit products pose a risk to consumers, Everett says. Arylla offers unique anti-counterfeiting ink that the trio invented. This ink can be applied to products, giving them each their own unique “fingerprint.” The fingerprint can be tracked, traced and authenticated throughout the supply chain using a smartphone.

“It’s a very special feeling to be able to dedicate your time to an idea that you have helped to create,” says Everett, 22. “It’s unlike anything else I’ve ever experienced in the workforce.”

Thomas, also 22, agrees. He says that what he most enjoys about Arylla is “working on a startup company where the goals are clear and the motivation is there because it’s your pet project and it’s something you can put all your weight into.”

The trio met while living in residence at Grebel, and studied nanotechnology engineering together at UW.

The idea for the company started with a material that the trio created by chance while testing different possibilities in the lab. They created a material that was difficult to detect and, after working with it for a few months, thought it would be interesting to apply it as a security feature since the material is virtually impossible to reverse engineer.

The trio won $25,000 last July at a competition for science start-ups and entrepreneurs, allowing them to further their work. They are focussing their efforts on the pharmaceutical industry but, given the versatility of their product, it could also be used on everything from electronics to fertilizer in the future.

According to Thomas, living together at Grebel helped make his partnership with Everett and Rasera possible. The three got to know each other during their first year at school and were soon spending “an unreasonable amount of time together,” doing homework, studying and socializing.

Everett describes his experience living at Grebel as “incredible” and “invigorating.” “It was very refreshing to be among a group of very bright and open-minded students,” he says. “You’re surrounded by students who are critical thinkers, and they like to challenge the status quo. . . . That’s not something you always find at most residences.”

Grebel provides a number of leadership opportunities that Everett says he was fortunate to take part in. He served on Grebel’s student council and also worked as a don, caring for the well-being of residents as well as taking care of the building after business hours. Those experiences helped him mature.

“It was my first time living away from home for an extended period of time, so it was a nice segue to what it’s like to be part of the real world and be an active member of the community as well,” Everett says.

He adds that being able to sit with his fellow Grebel residents and discuss issues ranging from nanotechnology to humanitarian concerns and spirituality was also formative. Everett, who grew up Catholic, says he learned a lot about Anabaptism along the way.

“I would say my concept of sort of the Mennonite way of life was not accurate, but the more I learned about it during my time at Grebel, the more it resonated with me,” he says, adding that concepts like community and living a life of service have impacted his overall goals as he begins his career.

“[It basically changed] my definition of success away from a high-paying engineering job to something that makes a meaningful impact in people’s lives,” Everett says.

Everett, Thomas and Rasera believe Arylla’s technology can have such an impact and are excited to see what the future holds. They are currently working to improve the company’s line of inks as well as its scanning technology. They plan to launch a pilot program in early 2017, with a full product launch to follow in 2018.

Thomas says that when the three were forming Arylla he wanted to join not only because he believed in the technology, but because he knew he could work with Everett and Rasera. “We’re a great team,” he says. “It’s fun being on this ride together with them.”