‘Covenanted around Jesus Christ, not our confession of faith’ 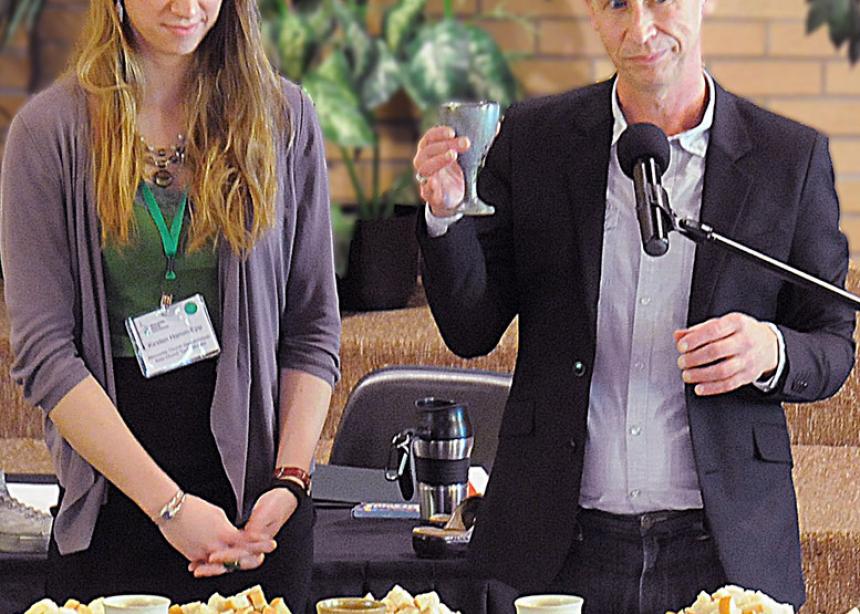 “We don’t all know God in the same way,” Bruce Jantzen reflected at the recent Mennonite Church Saskatchewan annual delegate sessions, “but that doesn’t change who God is.”

Jantzen, named moderator in January after Gerhard Luitjens resigned, said, “I don’t counsel anything other than that you speak out of your understanding of who God is and who we are as part of God’s family. Respond in [such a way] that we can remain the church of God.”

The sessions, held at Mount Royal Mennonite Church in Saskatoon on March 13 and 14, saw significant attention focussed on the issue of same-sex marriage. Jantzen, who is pastor of Laird Mennonite Church, urged delegates to “maintain an attitude of worship” throughout the business sessions, saying, “We are here to do God’s business. When we worship, we acknowledge God’s worth; when we acknowl-
edge one another, created in God’s image, we worship God.”

Jantzen’s words helped foster a spirit of respect, which would be reflected in the worship and deliberations that followed.

Gary Peters reported that the Pastoral Leadership Commission, which he chairs, had been asked to respond to the same-sex wedding held in Osler at the end of 2014, and whether pastors Anita Retzlaff and Patrick Preheim would be disciplined for conducting the wedding.

After meeting with Retzlaff and Preheim, Peters said the commission found “no grounds for credential withdrawal [as] no pastoral misconduct had taken place.” The pastors were following the “direction set by [their] congregation over the previous 10 to15 years.” Referring to the covenant delegates signed at the 2005 annual delegate sessions, Peters added, “It is clear we are covenanted around Jesus Christ, not our confession of faith.”

The debate surrounding this issue led Hague Mennonite Church to withdraw its membership. Area church minister Jerry Buhler cited a letter from the congregation, expressing hope that friendship and cooperation between Hague and MC Saskatchewan would continue even though the formal relationship has ended. Buhler offered a prayer of blessing for the Hague congregation.

Sonya Zabaleta of Hope Mennonite Fellowship, North Battleford, and Greg Redekopp of Laird Mennonite presented the first of three resolutions on the topic to the delegate body. It called for all members of MC Saskatchewan churches to vote on whether or not pastors credentialled by the area church should be allowed to conduct same-sex weddings. Results of the vote would be submitted to council by June 2015 and presented to next year’s delegate sessions for a decision.

Craig Neufeld of Rosthern Mennonite said that his congregation’s delegates were “troubled” by the resolution, and that voting on the matter “will cause harm and further division.” Calling it  “a no-win resolution,” Neufeld moved that it be suppressed. A ballot vote on Neufeld’s motion received the required two-thirds majority and was carried.

A second resolution by Joe Heikman and Cheryl Woelk, both of Wildwood Mennonite, Saskatoon, called on the commission to appoint an ad hoc committee that would guide a discernment process related to MC Saskatchewan congregations conducting same-sex weddings. The resolution states, “The committee will design and facilitate the process, communicate its learnings to the congregations, and prepare a recommendation for decision by delegates at the 2016 [annual delegate sessions].” The resolution, drafted by the five Wildwood delegates, would complement the Being a Faithful Church process, said Heikman,

Ric Driediger, speaking on behalf of Rosthern delegates, affirmed the call for a discernment process, but said “the emphasis must be on listening, not on coming to a decision.” Driediger moved an amendment, removing the deadline from the resolution. A ballot vote on the amended resolution was carried.

A third resolution, proposed by George Epp and Pauline Roth, both of Eigenheim Mennonite, called for the matter of same-sex marriage and inclusion of lesbian/gay/bisexual/transgender/queer individuals to be left to the “prayerful and sincere discernment of each member congregation.” This resolution was withdrawn following adoption of the previous resolution.

Hosted by Mount Royal, Warman and Aberdeen Mennonite churches, the sessions included worship focussed on “Walking with God, with each other, with the stranger beyond our walls.” At the end of the day, how delegates behaved inside their walls gave some a sense of hopefulness. Ben Pauls of Zoar Mennonite Church, Waldheim, said, “I hear uncertainty about the future, and yet, underlying that, the certainty that there is a future for MC Saskatchewan.”

Saskatchewan youth want to be in the loop 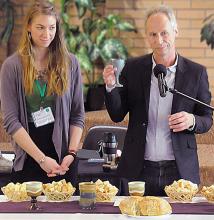