‘Connected: Striving side by side with one mind’ 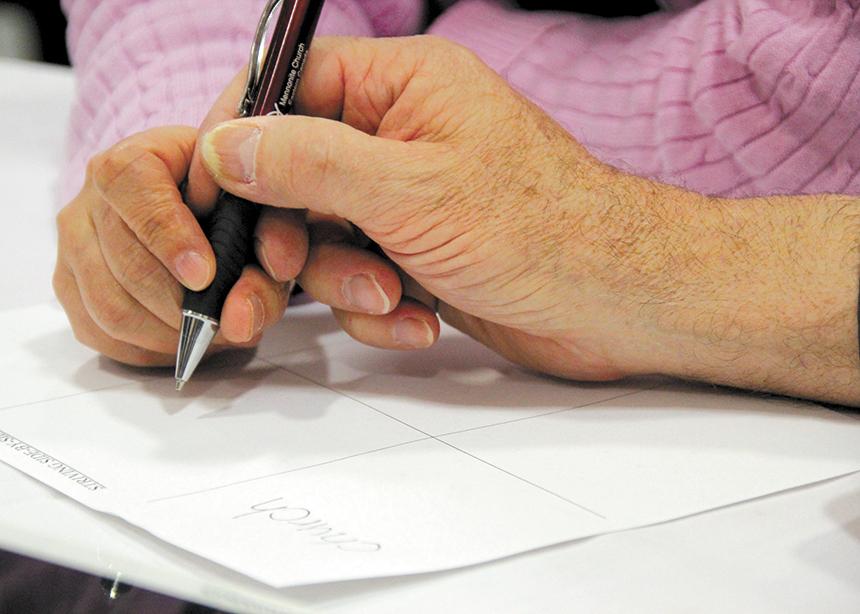 Ellen Kim and Nick Hamm take part in an Anabaptist Learning Workshop exercise led by coordinator Matthew Bailey-Dyck at the 31st annual MC Eastern Canada church gathering at Redeemer University College in Ancaster, Ont. The purpose of the exercise was to write and draw together, and then reflect on the experience. (Photo Dave Rogalsky)

The theme of this year’s Mennonite Church Eastern Canada annual church gathering—stated in the headline—had many facets, both inspiring and challenging, for those gathered at Redeemer College in Ancaster on April 27 and 28, 2018.

He noted that their concerns are about more than the same-sex debate, but also about the authority of Scripture in the life of the church, how to understand salvation and the mission of the church, the importance of a strong Christology, the centrality of the resurrection, and the work of the Holy Spirit.

“I am aware that at times you feel judged and sidelined by your peers and others for your theological perspectives,” he told these churches’ delegates. “I know that the eye-rolling and barbed comments that you have experienced at times have been hurtful. I understand that, at times, our common worship has not felt like it has made space for the kind of worship that you find nourishing and meaningful. Some of you have had hurtful experiences with [MC Eastern Canada]. I am sorry. I say that for myself and I hope I say that for all of us.”

He called on “conservative friends and colleagues” to meet and work at the issues, to have “genuine dialogue that gets us out of a cycle of accusation and defensiveness, and instead moves us into substantial conversation. . . . I pray that we will allow the Spirit to bring healing to our wounds. May that healing spirit bind us together in our common faith in Jesus Christ, so that we can truly and genuinely strive side by side with one mind for the faith of the gospel.”

During a time of response that followed, Steve Drudge, pastor of Steinmann Mennonite in Baden, noted the continued use of “us and them” language in Martin’s comments.

Dave Tiessen, a self-identified “conservative evangelical” and pastor of Bethel Mennonite near Elora, drew attention to the lack of response to the negative comments online and in Canadian Mennonite about Maple View Mennonite Church’s paid insert in CM last fall. He said that it felt to “conservatives” that the Being a Faithful Church resolution “to live and let live” was only meant for “liberals,” and no leaders came out to condemn the hurtful comments made by “liberals” toward “conservatives.”

Kevin Peters Unrau, one of the pastors of Hillcrest Mennonite in New Hamburg, noted that this healing was not up to the regional church leadership, but belonged to “all of us out here.”

Positive examples of being connected

Mission minister Brian Bauman and mission engagement minister Norm Dyck highlighted the stronger connections between local congregations and Witness workers following the nationwide and regional church restructuring, and in places where MC Eastern Canada might have future connections, including Laos and Ethiopia.

Pastor Fanosie Legesse of Zion Mennonite in Elmira, spoke of how he had been mentored by Temiru Urgessa of Meserete Kristos Church in Ethiopia, where church members are expected to give two hours a week to the church, one for intensive prayer and one for discipleship training. This is on top of the half day on Sunday that is committed to worship.

Informed Conversations, a tool developed by the regional church, local congregations and consultant Betty Pries, is helping congregations discover their strengths and areas of need.

Louise Wideman, pastor of Vineland United Mennonite, reminded the delegates that “one size fits all, not,” pointing out how her congregants helped people who are not particularly internet-friendly to use the tool.

The 2017-18 financial statements showed a deficit of almost $106,000, smaller than had been expected. The 2018-19 budget projects a deficit of more than $207,000. In both cases, the deficits are covered by the Faithful Steward Fund, which is made up of large bequests. Giving to all partner agencies is being maintained.

Sean East, the regional church’s financial manager, noted that such deficits cannot be maintained over the long term, but that staff and the boards decided that in this first year of the new MC Canada structure they would not attempt to make more changes to the regional church’s programs and commitments. 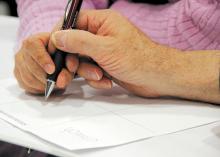 Ellen Kim and Nick Hamm take part in an Anabaptist Learning Workshop exercise led by coordinator Matthew Bailey-Dyck at the 31st annual MC Eastern Canada church gathering at Redeemer University College in Ancaster, Ont. The purpose of the exercise was to write and draw together, and then reflect on the experience. (Photo Dave Rogalsky) 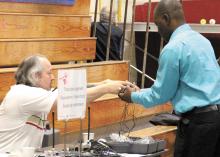