‘Choose something to do’ 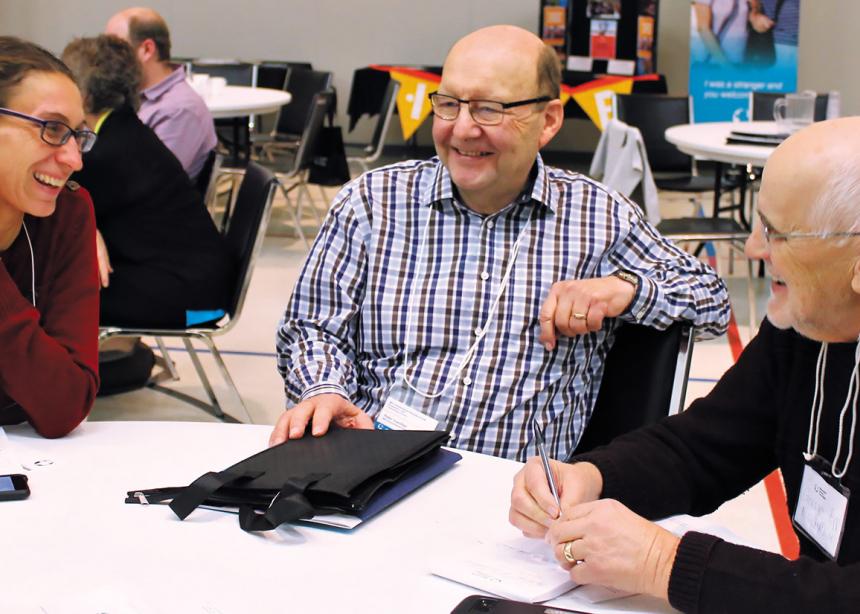 “There’s no such thing as a natural disaster,” according to Bruce Guenther. But Mennonite Central Committee (MCC) Canada’s disaster response director wasn’t in denial.

Guenther was the featured speaker at MCC Saskatchewan’s encounter and annual general meeting, held at Cornerstone Church in Saskatoon on Nov. 4, 2017. “Disasters are caused by people’s vulnerability to disaster,” he said, noting that the more vulnerable people are, the more potential there is for natural hazards such as earthquakes to become disasters.

Speaking on the theme, “Beyond disaster, embracing hope,” he told those in attendance that the need for disaster relief has never been greater, with 65.5 million people currently displaced worldwide. This figure has almost doubled in the last decade. Of that number, 22.5 million people are refugees.

MCC has responded to 26 disasters in the past year, including drought in Burundi; conflict in the Democratic Republic of Congo; hurricanes in Haiti and Cuba; flooding in Nepal, Bangladesh and India; and an earthquake in Mexico.

Why are there so many disasters in the world today? Climate change is definitely a factor, Guenther said. “Wet areas are getting wetter; dry areas are getting dryer. There are more frequent and longer warm spells and heat waves, and more frequent drought,” he said. “Tropical storms are increasing in both intensity and frequency.”

MCC partners with local organizations in order to respond in the best way possible. “People affected by disaster need to be consulted,” said Guenther. In Chad, for example, a local partner helped identify the need for water and sanitation. “Working with local partners ensures our response is appropriate and sustainable,” he said.

MCC’s response is based on need. This means working with the most vulnerable people. Since Aug. 25, 2017, 607,000 Rohingya refugees have fled to Bangladesh from Myanmar, joining 213,000 Rohingya already in Bangladesh. But they are not recognized as refugees because they don’t have citizenship in Myanmar. In addition, there are no local aid organizations in the area to assume responsibility for them, so they are extremely vulnerable.

One aspect of MCC’s work is reducing people’s vulnerability to disaster. In Haiti, the 2010 earthquake and recent hurricanes have been devastating because buildings were constructed with poor materials using unstable methods. In response, MCC repaired and built 800 homes that will be resistant to future earthquakes and hurricanes.

Building trauma resilience is another important aspect of MCC’s disaster response. In Nigeria, where people have suffered trauma caused by Boko Haram, MCC partners with local organizations to offer trauma healing workshops and local listening companions. “We try to emphasize trauma healing as an entry point to peacebuilding,” said Guenther. “We do this by bringing people together who are perceived to be on opposite sides of a conflict.”

Guenther acknowledged that responding to disasters can be overwhelming. “This year is very difficult,” he admitted. “The pie is not bigger, but the number of disasters is dividing it into many more pieces.”

Guenther urged delegates to let their compassion motivate them to action. “Choose something to do,” he told them. That something could be making blankets, holding a relief fundraiser or sponsoring a refugee family. “You can’t solve all the problems,” he said. “Just take the next right step. Choose something that you can do.”