‘Along the Road to Freedom’ exhibit tours Alberta 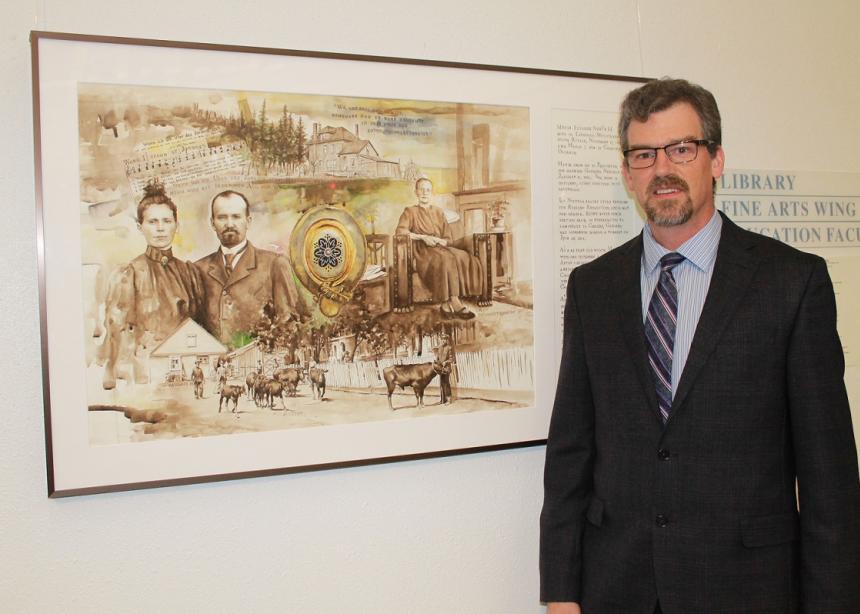 Tim Wiebe-Neufeld stands beside the Ray Dirks painting that tells the story of Maria Friesen Neufeld, his great grandmother, one of the courageous Mennonite women who brought their families out of the hardships and terror of the Soviet Union in the early 1900s. (Photo by Donita Wiebe-Neufeld)

On Dec. 2, 2017, more than a hundred people gathered at Edmonton’s King’s University for the opening of the Along the Road to Freedom art exhibit. This was the first of three stops in Alberta that will end in the spring.

Featuring paintings by Winnipeg artist Ray Dirks, the exhibit celebrates the stories of Mennonite women of courage and faith. The 26 paintings are intricate watercolour collages depicting snippets of the lives of women who brought their children out of the Soviet Union to lives of peace and freedom in Canada and Paraguay.

Relying on oral family history and his great-great grandfather’s diaries from the early 1900s, keynote speaker Tim Wiebe-Neufeld told the story of his great grandmother, Maria Friesen Neufeld, who brought her four children to Canada alone, scant weeks after losing her husband to a bandit’s bullet.

The program also featured Nettie Dueck, a member of the original Along the Road to Freedom committee from Winnipeg, who shared briefly about how the project began, as well as her mother’s story of emigration.

A small choir, led by Harold Wiens, shared four German songs, including “So nimm den meine Hande” and “Nun danket alle Gott,” which were sung at the Lichentau train station and after clearing the gate that led to Latvia, as the people fled the Soviet Union.

The exhibit is sponsored by the Mennonite Historical Society of Alberta, Mennonite Mutual Insurance Co. (Alberta), and Mennonite Central Committee Alberta. It will remain open for viewing at King’s University until Jan. 30, 2018. It opens at Ambrose University in Calgary on Feb. 25 and at the Gem of the West Museum in Coaldale on Apr. 14.

For background on the exhibit see ‘Along the Road to Freedom.’

Tim Wiebe-Neufeld stands beside the Ray Dirks painting that tells the story of Maria Friesen Neufeld, his great grandmother, one of the courageous Mennonite women who brought their families out of the hardships and terror of the Soviet Union in the early 1900s. (Photo by Donita Wiebe-Neufeld)

Nettie Dueck, one of four Along the Road to Freedom committee members, travelled from Winnipeg to Edmonton to be at the opening program at King’s University in Edmonton. Dueck is standing beside the Ray Dirks painting that tells her mother’s story. (Photo by Donita Wiebe-Neufeld)

Dave Toews, left, Edmonton exhibition and Alberta tour organizer for the Along the Road to Freedom exhibit, meets Lois Mitchell, Alberta’s lieutenant governor, right, at a private viewing and discussion at King’s University on Dec. 3, 2017. (Photo by Donita Wiebe-Neufeld)