‘The tensions of taking Scripture seriously’

CMU students explore the Bible in an increasingly secular world 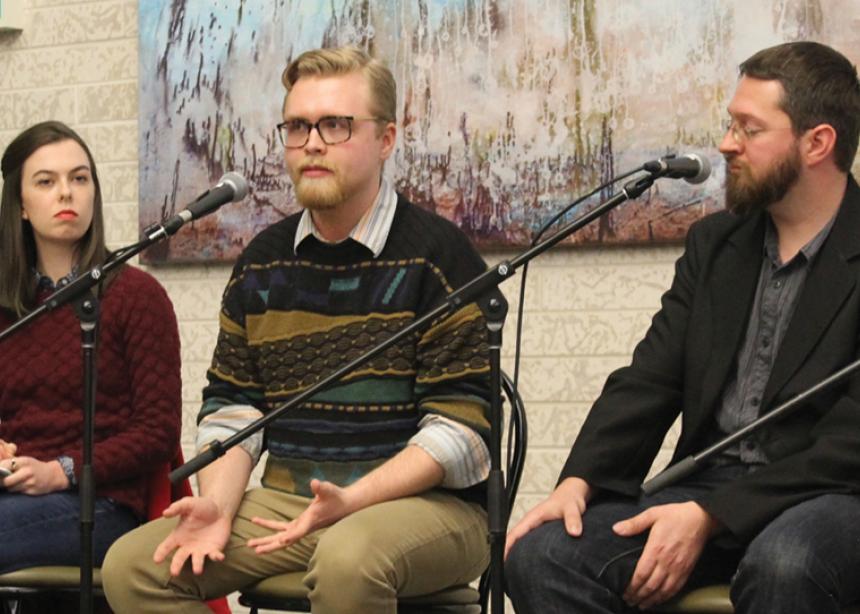 Scripture is a massive, ancient, messy archive of God’s relationship with humanity that many claim to interpret correctly.

But with such diverse understandings of the Bible, how can Christians approach it with humility while granting God’s words authority over their lives? How can young people take Scripture seriously in an increasingly secularized world?

These questions and others were raised at the Canadian Mennonite University (CMU) event, “The Bible tells me so . . . doesn’t it? A conversation with young adults on the tensions of taking Scripture seriously,” a panel discussion that took place on Feb. 5, 2018.

The panelists included undergraduate students from diverse Christian denominations, including James DeGurse, who attends a Roman Catholic church; Claire Hanson, who belongs to a Mennonite Church Canada congregation; Marnie Klassen, who has a Mennonite Brethren background; Braden Siemens, who attends both Pentecostal and Anglican churches; and Kenny Wollmann, who is Hutterian Brethren.

Some addressed the importance of reading the Bible in community.

DeGurse said he finds value in reading the Bible in a group through the sacrament of communion in his experience in the Roman Catholic tradition. Each service involves a reading from the Old Testament, the Psalms, the epistles and the gospels. “This communal, liturgical reading tells me I need to situate myself in this great tradition that has come before me,” he explained. “It’s communal reading in the deepest sense.”

From there, DeGurse noted that the reading of the Bible culminates in the eucharist. “It properly orients me in relation to the Bible,” he said.

Wollmann has found positive and negative connotations with communal reading of Scripture and the Hutterian interpretations. He pointed to the Lehren, a collection of teachings developed in the Hutterite community that include deeply biblical reflections on spiritual themes as well as direct exegesis of biblical passages.

“Throughout our history, it has been these teachings that have been the impetus for surges of reform and recommitment,” Wollmann said. “Hutterites are still utterly reliant on these teachings. This collection of nearly 400 texts has been a source of blessing for me and my people. Many of the scriptural interpretations therein are rich and nuanced even today.”

Wollmann added that Hutterites, like many other Christian denominations, have confidence that they have the “surest way of living the Christian life, and therefore possess the best understanding of Scripture,” which has sometimes led to “exclusionism and arrogance.”

Wollmann’s community, the Baker Colony near MacGregor, Man., sent him to study at CMU, which has allowed him to look deeper into his faith tradition and has been a source of delight and spiritual nourishment, he said.

When Klassen spoke, she described her upbringing as ecumenical. Although her home church is Mennonite Brethren, she attended a Catholic elementary school, went to the youth group at an Alliance church and, as a child, attended a Mennonite Brethren church that used MC Canada materials.

Being exposed to so many different ways of viewing Scripture and God was confusing at times. “The Christian social justice world was assuming a God of compassion, while much of the theology I experienced elsewhere assumed an austere God,” she said. “There had to be a better way to read the Bible.”

Over time, through advanced education and a more nuanced worldview, she’s coming to a more balanced idea of the role of Scripture. “I’m coming to an understanding that all stories are valid, and there’s something to be gleaned from everyone’s experience,” Klassen said after the discussion.

For Hanson, who grew up in Asia with parents who volunteered with Mennonite Partners in China, living in a different cultural context impacted the way she experienced Christianity and Scripture.

“No one person or culture can fully comprehend the great mystery of God, but by being open-minded to the possibilities of differences, we can see God in a new light, bringing us to greater understanding and insight,” she said.

Siemens, who attends two very different church services every Sunday, said that church, school, books, people and places have affected his interpretations of Scripture. “The Bible is in itself a conversation, a symposium of ideas—sometimes in conflict, sometimes not—that labours toward a narrative moment that demands to be interpreted, not to be known scientifically or grasped somehow rationally,” he said.

To watch a video of the panel discussion, visit cmu.ca/face2face. 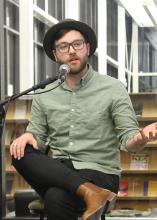 Braden Siemens’s take on Scripture is informed by attending both Pentecostal and Anglican churches. (Photo by Aaron Epp)

‘What actually does the Bible tell us?’ CMU professor Dan Epp-Tiessen, left, asks during his introductory remarks. (Photo by Aaron Epp)