‘A season of change and a search for vitality’

MC Alberta reports on a year of blessing and challenge 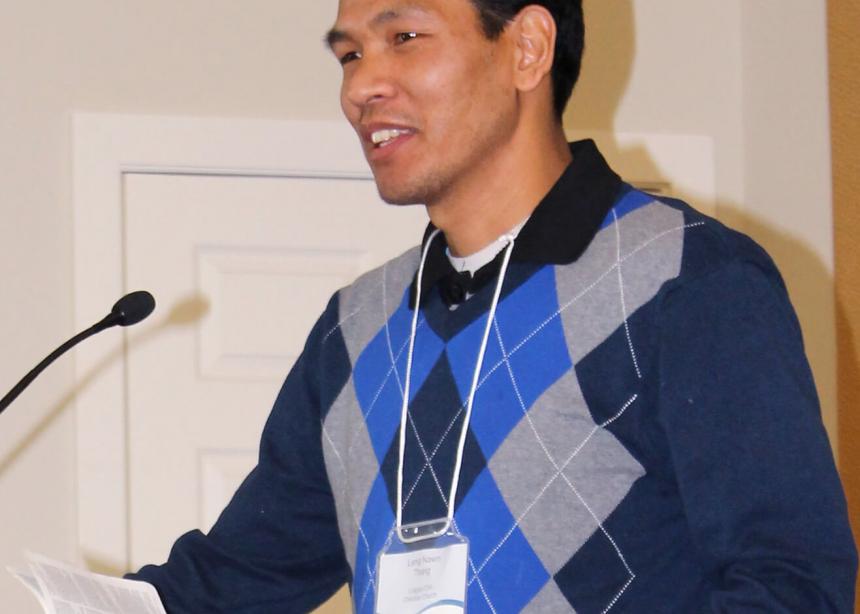 In comments preceding the business session, moderator Dan Jack was clear in naming some of MC Alberta’s challenges for the coming year: “[We are] expecting a difficult year and a deficit budget. The economy and the [Being a Faithful Church (BFC)] process has had some impact with involvement.”

Calgary Chinese and Vietnamese Mennonite churches both withdrew from the area church in 2016, while Edmonton Vietnamese Mennonite Church has indicated it will withdraw at the end of 2017. The BFC decision on same-sex relationships at the MC Canada assembly in Saskatoon last year played a part in all three withdrawals.

Several members of the Calgary Vietnamese church addressed last month’s gathering, expressing blessings and best wishes, and asking that congregations remember to pray for each other as everyone seeks to serve Christ faithfully.

A letter from the Edmonton Vietnamese congregation, read aloud by Jack, expressed a similar tone of blessing and love. Jack and area church minister Tim Wiebe-Neufeld reported having had a very good conversation with the Edmonton leaders prior to their vote to withdraw.

Ev Buhr, president of Alberta Women in Mission, announced the folding of the group after 69 years, due to dwindling numbers. “Our women’s groups are encouraged to continue to support Mennonite Women Canada,” she said. “We are working with the [provincial] executive on a plan for women’s ministry in Alberta.” The continuation of an annual women’s retreat is one project that is expected to continue.

Alberta’s current economic difficulties and the unknowns surrounding a new structure for MC Canada made budgeting a challenge for 2017. While the financial report for 2016 showed a surplus of $13,200, this was due to a few months with no area church minister, as well as a $20,000 contribution from MC Eastern Canada toward costs of the Future Directions process. Giving from member churches and individuals was down by just over $38,000, and the projected deficit for 2017 is $33,800.

In its report, the Finance Committee wrote: “We feel that since this is a transition year for the area and national churches, it is not the right time to make significant shifts in our programs.”

The Executive Committee will add fundraising to its agenda in efforts to increase individual donations in 2017, while programs such as Camp Valaqua and the North Edmonton ministry to local Muslims will continue to fundraise as well.

Camp Valaqua came in exactly on budget and reported that much-needed kitchen renovations were made possible through a donation in memory of Ingrid Janssen, camp co-manager who passed away in 2015. A water-filtration system will be installed before summer camping begins, and a complete washroom renovation is planned for the fall. Valaqua reported a slight decrease in camper numbers for 2016, citing the economy and a computer “hack” of its information website for the decline.

Seventy percent of last year’s campers claimed no church affiliation, a record number for Valaqua. Director Jon Olfert reported: “Our ministry opportunities continue to be crystal clear. . . . We cherish this opportunity to share the teaching of Jesus with children from such a diverse background.”

The installation and blessing of Tim Wiebe-Neufeld as area church minister was led by Paul Bergen, chair of the Congregational Leadership Committee.

Two “home-sourced” keynote speakers blessed the sessions with stories from their ministries.

Donna Entz, MC Alberta staff person for the North Edmonton ministry, spoke about living faithfully both locally and globally. “If we are to share the light of Jesus, we have to be as relevant in our day as Jesus was in his day,” Entz said.

Pastor Leng Thang of Calgary Chin Christian Church spoke of unity in Christ. The topic is poignant for him, as his Mennonite congregation is made up of people from six different denominational backgrounds. “Church is not the building,” he said. “It is our confession, our life for Christ, our togetherness.”

At the close of the sessions, Jack said, “Now we enter a season of change and a search for vitality.” 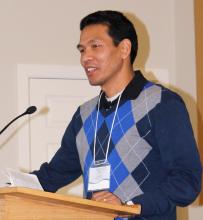