‘This profession found me’ 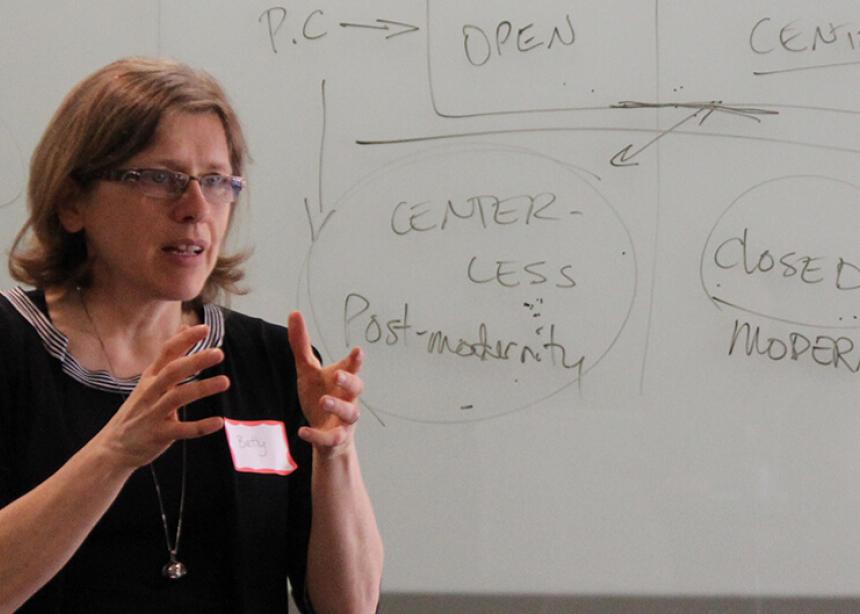 Growing up in an immigrant family prepared Betty Pries to see God’s presence in the struggles of life. Her grandmother’s “story-based faith” came to her through stories from Russia under communism, fleeing the Soviet Union during the Second World War and homesteading in Paraguay. In spite of struggles, and perhaps even because of them, there was a pervasive sense of God at work in the world and of being dependent on God.

Pries believes that there are some things that people only learn through suffering. Leaving university in the early 1990s, intent on carrying on with a master’s degree in theology, which she eventually completed, Pries was tapped on the shoulder to work in a mediation centre in Winnipeg, where this spirituality stood her in good stead. As a new Canadian family, they were “in the world, but not of the world,” looking for other ways to do things than was common around them. “This profession” of working with individuals, businesses and congregations to find hope and a future “found me,” she says.

In 2003 and now in Ontario, Pries was working with congregations in many denominations, mediating, visioning and restructuring, when Andrew Reesor McDowell, former moderator of Mennonite Church Eastern Canada, wondered aloud with her about forming a more official organization to make sure congregations were adequately resourced.

Three years later, together with McDowell and Sue Steiner, Associates Resourcing the Church (ARC) was born. From the beginning, all the associates have worked in both church and business settings, although the business work was still considered freelance. Recently rebranded as L3 Group, ARC is now one arm of the business. Based on ARC’s core values of “love, listen, lead,” the associates have brought all their work under one roof.

Pries has also worked at coaching individuals; with area churches, most recently MC B.C. in developing its priorities of being “Anabaptist, missional and connected”; and with MC Canada.

While beginning and working from a Christian perspective, over the years Pries has had a growing confidence to speak about the spiritual basis of what she does, as well as more invitations to do so from those with whom and for whom she works.

She sees the biggest challenges in the 21st century as being the search for meaning, purpose and belonging—all spiritual longings. The work of L3 is transformational, helping businesses and congregations find their deep passions and developing ways to fruitfully fulfill them. Pries invites groups to “honour God’s presence in the room” as she works.

Each of the associates in L3, which now includes non-Mennonites, agree to have a daily spiritual practice as part of their lives and work. They listen to each other and pray together, giving them a sense of being grounded and a sense of humility.

Pries’s own spirituality is a contemplative practice of deep listening to God, something that stands her in good stead as she listens to groups and to God, in order to help her clients to health and fruitfulness. “God is already at work, is already here,” she tells groups. Her goal is to help them hear and see God among them so they can move from despair and confusion to hope and joy.

Contemplative spirituality, according to Pries, has the potential to connect people from evangelical, Roman Catholic, mainline and Anabaptist traditions, as it can encompass evangelical missional thinking, Catholic missio dei¸ mainline peace and justice work, and the Anabaptist “peaceable kingdom.”

Pries believes everyone lives in a place of dependence, that “there is something out there that is bigger than us, that we need to live with our hands open,” and that when individuals, groups and congregations do this, “blessings emerge.” She believes this is part of a “deep spiritual foundation,” citing Franciscan friar Richard Rohr: “We desire to change because God loves us, not so as to have God love us.”