‘A positive presence in Montreal’ 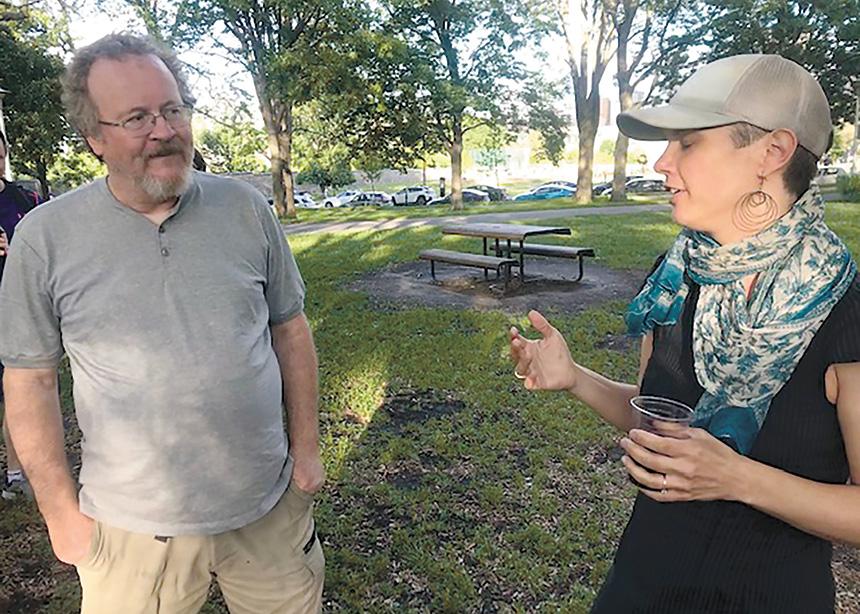 Luke Martin (left) hears accolades from Dora-Marie Goulet, whom he has mentored at Maison de l’amitié in Montreal.

In the middle of Montreal’s Plateau-Mont-Royal neighbourhood is a small and much-loved community centre, the Maison de l’amitié (MA) or House of Friendship. This unassuming brick building is a bustling place, fueled by the desire for community and social change. On any given day you will see people wandering in to volunteer or to benefit from the variety of services that this centre offers. And at the heart of it all is Luke Martin.

Martin, recently retired, was the director of MA for 21 years. In fact, he has been so enamored of this community that he has been helping cultivate it since he was 15 years old, as a humble participant. In the mid-1980s Martin chaired MA’s board of directors. In 1993 he was hired as a receptionist and, under the wing of then director John Docherty, he became assistant director and started developing programming. When his predecessor stepped down in 2000, Martin stepped up to guide the operations.

His tenure as director, which ended last month, was full of creative initiatives and social impact. He has nurtured people’s gifts, given them opportunities to change their neighbourhood, and mentored and inspired the current community leaders who work at MA today. His mentality around working together to effect positive change has drawn people in, and he leaves his post with a group of inspired and soulful people to take the helm.

Martin’s list of accomplishments is long, though he is too humble to say so himself. In conversations, he always points out that it is relationships that have built up the centre. But, as his co-workers would tell you, it is his guidance and willingness to work alongside people that have brought many of MA’s projects to fruition.

The language classes are predominantly taught by volunteers, so they can be offered at an incredibly low cost, with a discount for refugee claimants and those on welfare. There were even, briefly, Mohawk language classes, created as an act of reconciliation with the Indigenous people whose land the community centre is on. Recently, with oversight from Dora-Marie Goulet, the project has grown to include Spanish and Portuguese language classes.

Martin has also built relationships between the community centre and the municipal government. He helped initiate farmers’ markets, got MA involved in an annual plant distribution project, and helped local businesses connect with their representatives during the pandemic. Moreover, MA partners with RIVO, an intervention network that works with people affected by organized violence. Martin is currently the president of the organization’s board.

While Maison de l’amitié started as a project of Mennonite Church Eastern Canada, it no longer receives funding from the regional church and is now focused on local ownership, with local church involvement. There are seats on the board allocated to Mennonite Fellowship of Montreal, which shares the building with MA.

When asked about what he wanted the larger church to know, Martin said two things. First, he encourages the church to be involved by sending youth groups to do service projects with MA, and by sending students to live in the residence that occupies the top floor of the community centre. Second, he wants to pass on his thanks for the direct and indirect support the broader church has given. “Your support for MA has impacted so, so many lives … [MA] has been such a positive presence in Montreal.”

A retirement party for Martin was held on June 10 and many people had wonderful things to say about him. There was no shortage of terms like “mentor” and “brother” used by those who wanted to express their gratitude for all the work he has done and all the relationships he has built within this community. Martin has created a space for people with a wide variety of ethnic and socio-economic backgrounds as well as abilities, fostering an environment where everyone is welcome and valued. What a legacy to leave behind!

The new director, Pierre Martin (no relation to Luke), has big shoes to fill. 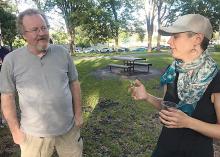 Luke Martin (left) hears accolades from Dora-Marie Goulet, whom he has mentored at Maison de l’amitié in Montreal.