‘A place to belong’

Neighbourhood ministry is about more than food 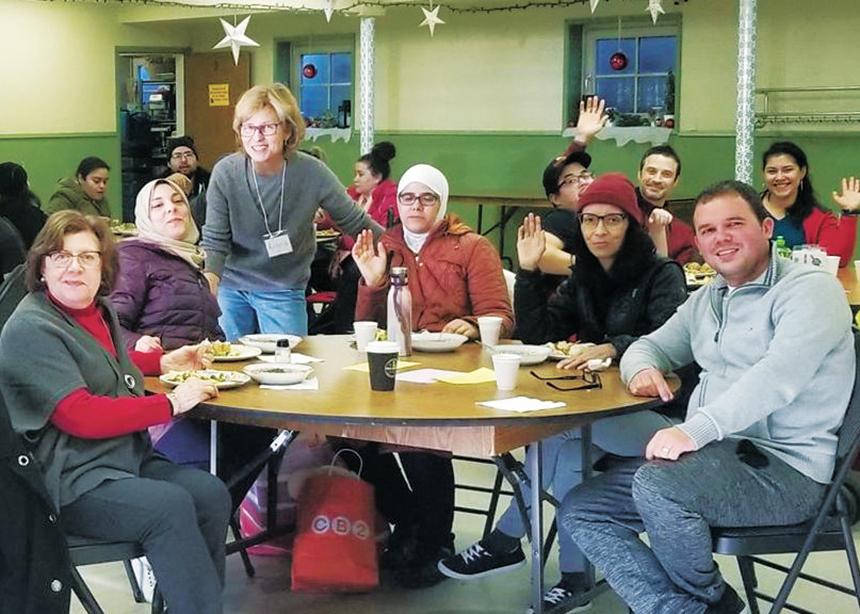 Members of the Sherbrooke Mennonite Church’s food-bank outreach ministry enjoy a Christmas celebration together. Participants say the gatherings help them feel like a family. (Photo by Yohan Sanchez)

Food may be what draws people to the basement of Sherbrooke Mennonite Church every Thursday morning, but it’s not what keeps them coming. It’s a feeling of family, a place to call home.

Thirty years ago, Sherbrooke began partnering with Mennonite Central Committee’s food bank to distribute food to refugees. Food ministry is still the key component but it’s just one part of the outreach ministry today. Bags of groceries are still distributed and baked goods are donated by Cobs Bread, but coffee, tea and conversation are now also a part of the Thursday morning gathering.

According to Yohan Sanchez, Sherbrooke’s community pastor, over the last two years the ministry has evolved into more of a community outreach and is one of the first points of contact in the neighbourhood. About 70 percent of the participants are refugees, with the other 30 percent coming mostly from the area surrounding the church, which has become more and more diverse.

He says the church doesn’t have to advertise for participants; those already coming advertise well enough by word of mouth: “There are people [attending] who don’t even live in Vancouver; they come [from] as far as Surrey and Langley to be part of this.” People keep coming, he says, because they have found “a place to belong.”

Additionally, the volunteers no longer come only from Sherbrooke. “Right now, we have volunteers from [seven] different churches, including students and professors from the University of B.C. and people from the neighbourhood, churched or unchurched,” he says. “We don’t call ourselves church, we say we are a family, very diverse, very multicultural. Jesus is the foundation of everything we do.”

The group, with a core group of 20 families, periodically enjoys a meal together prepared by various volunteers. Sanchez says that people are glad to share their gifts of cooking or in whatever way they wish to serve.

“It’s a powerful ministry,” he says. “Most churches in our city are concerned with how to [increase] numbers; they’re not focused on those who are marginalized.” He notes that many people at Sherbrooke were immigrants themselves, so the desire to minister to newcomers is strong.

Sanchez believes that some people don’t feel comfortable in a traditional church setting, and that places such as the refugee food ministry create a space where Christians walk alongside people, and they can feel at home without having the basic gospel message changed. “What makes the church attractive is the uniqueness of the program,” he says. “God is doing something here.” 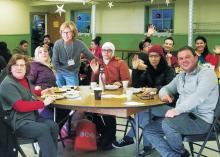 Members of the Sherbrooke Mennonite Church’s food-bank outreach ministry enjoy a Christmas celebration together. Participants say the gatherings help them feel like a family. (Photo by Yohan Sanchez)