‘In the midst of suffering, faith does not disappear’ 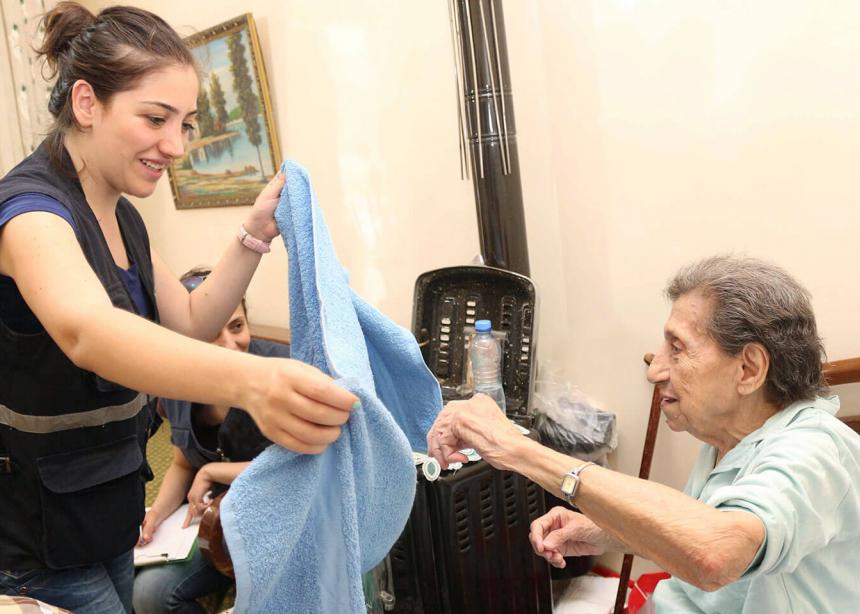 In October 2016, students arriving at a Christian school in Aleppo, Syria, discovered that a rocket had blown out a portion of a classroom. So many rockets were landing in the area that the school administrators hadn’t yet realized the school was hit.

One of the area pastors sends his children to that school and distributes Mennonite Central Committee (MCC) cash allowances to the most vulnerable people in his community. This pastor, who is not named for security reasons, also reported that a family of five was killed just outside the doorstep of the building where his church meets.

Aleppo, which used to be an affluent city before being ravaged by war over the last five years, again experienced escalating violence this past summer, which reached a peak in October.

“It is a city that is surrounded by fear, with bombs dropping, and with no electricity nor water, and everything that’s going on in here makes it seem like it’s impossible to live,” said a representative of the Fellowship of Middle East Evangelical Churches, an MCC partner. “People will never give up, even though they sometimes lose hope or are afraid, but people here remake their lives daily.”

MCC supports students in four church-based schools in Aleppo with tuition and teachers with trauma-resilience training. Peacebuilding efforts also continue, working to bridge divides between religious and political groups. Church members distribute cash allowances, blankets and kits filled with hygiene items as a way to carry out their mission.

“In the midst of suffering, faith does not disappear,” said Doug Enns, one of MCC’s representatives in Lebanon and Syria. “MCC’s aid helps strengthen the churches to be able to respond to the needs of the most vulnerable in their communities during this time of war and loss.”

Sosamma, a 91-year-old woman whose real name is not used for security reasons, left her home in a state of shock after a missile hit it this past summer. She now lives alone with great difficulty and suffers from memory loss. Without a regular income, she relies on help from others, and appreciates MCC’s relief kit filled with hygiene supplies.

“At my old home, my brother used to visit me with his family from time to time, as well as my friends,” she said. “But now, since the city is witnessing a very bad situation, it’s very difficult to live or even to try to go out to buy food or any other things. I depend on my neighbours and good people like you to get my essential and necessary needs. You are my only hope in these difficult days,” Sosamma told workers for the Middle East Council of Churches, another MCC partner.

While many Syrians have left the country in search of safety, there are still 6.1 million displaced persons within the country.

“Some Syrians, who have exhausted all other options, have left their homeland for the West. . . . But the greatest need remains for those who are staying in the Middle East wanting no more than to just go home and live in peace,” Enns said. “We need enough support here now for people to survive, maintain hope and prepare to rebuild lives when the crisis ends. So our work as MCC here in the Middle East is to respond to this primary need.”

MCC has designated more than US$40 million through 36 partners in response to the Syria and Iraq crisis since 2011, including more than 60 shipments of hygiene items, blankets and other humanitarian supplies. Significant contributions from MCC’s account at the Canadian Foodgrains Bank and the Canadian government have bolstered this response.

See more on assistance for the people of Syria:
A hope for home
I feel it’s my country now
A town that welcomes refugees