‘The level of mechanization was amazing to witness’ 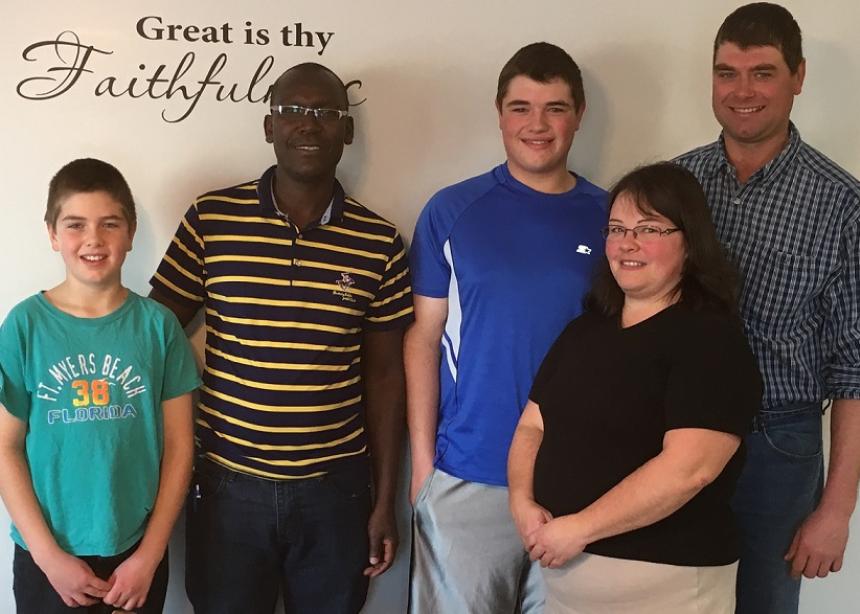 For John Mbae, a Canadian Foodgrains Bank conservation agriculture technical specialist based in Kenya, a visit to the Canadian Prairies was informative and inspiring.

“I had the privilege of staying with a farm family in Saskatchewan,” says Mbae. “Although their farm operation was very large and profitable, they were very approachable and hospitable to me, an African farmer. We shared with each other like colleagues.”

Mbae supports partners, farmers and farm extension workers in Foodgrains Bank projects in Kenya that are teaching small-scale farmers how to implement conservation agriculture techniques on their farms. The purpose of his visit was to share with Canadians how assistance through the Foodgrains Bank and Global Affairs Canada is making a difference for people in Kenya experiencing hunger.

Over the course of a couple weeks, Mbae travelled more than 3,700 kilometres by vehicle through Manitoba, Saskatchewan and Alberta, visiting a dozen communities and giving nine presentations to hundreds of people.

“The stories I shared of Kenyan farmers who have improved their lives through conservation agriculture projects—these were very well received by the Canadians in attendance,” he says. “They are stories that are important for them to hear. Some people were very moved by the stories about women farmers, for example, asking what more could be done to help women in Kenya who face these major challenges.”

In turn, Mbae himself was affected by the stories and experiences of the Canadian farmers he met. “It was impressive to me that farmers here have been using conservation agriculture techniques, like zero tillage, for up to 20 years or more,” he says. “I was able to visit a potato farm that invested heavily in crop rotations. It was very amazing to see how much farmers invest in cover crops, to manage the soil.”

He also noted how much technology is used on Canadian farms. “The level of mechanization was amazing to witness,” he says. “In Saskatchewan, I visited a dairy farm with a few people working there. We went out to see the animals, and when we got there and turned on the lights, the cows were milking themselves with the machines monitoring and controlling the milking.”

He was also deeply touched by the care and commitment shown by such farmers to helping others around the world. “I was struck by the longevity of the growing projects through which farmers and rural communities support the Foodgrains Bank,” he says. “They give of their time, land and equipment. Some of them have been doing this for more than 15 years.”

Overall, the visit was a success, says Theresa Rempel Mulaire, who manages the Scaling-Up Conservation Agriculture in East Africa program to which Mbae provides technical support. “It was important for John to see that conservation agriculture principles are applicable around the globe, and not just for small-scale African farmers,” she says, adding, “It was also great for John to meet the community of support for this work,” she says.

Through Global Affairs Canada the Canadian government supports the Scaling-Up Conservation Agriculture program, providing a 3:1 matching grant totalling $14 million over the five years of the program, which has a total value of $18.6 million.