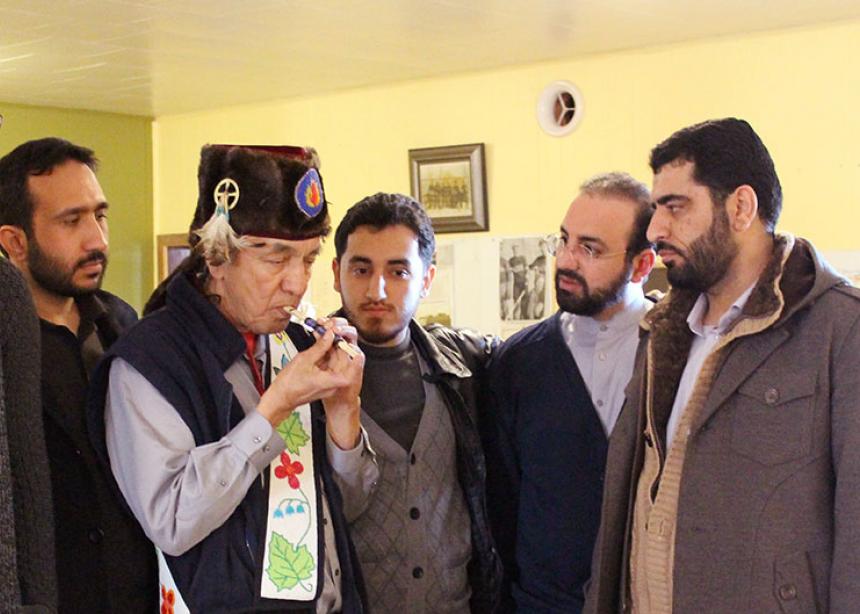 “I’ll intentionally call you my sister, for I have two and I love them so much. Now I have three and I love them all to the degree that I’m ready to die for them. So you are really beyond a friend for me.”

That is part of an e-mail that a man I will call M wrote to me the day before he left Winnipeg. He was part of a group of Shia Muslim graduate students who travelled from Qom, Iran, to study an intensive course on systematic theology at Canadian Mennonite University (CMU) in Winnipeg.

From March 7 to 19, I spent every single day with M and his six companions as one of their hosts at CMU. I welcomed them at the airport with my professor, Harry Huebner, and my spouse, Gerald Ens. Harry and Gerald received hugs. In contrast, our guests nodded at me with a hand laid over their hearts.

When class began each day, the Iranian students greeted the male professors teaching the course with a handshake and sometimes a hug. They greeted me with a slight bow and asked, “How are you, Lisa?” I was in Iran last year, so I expected this discrepancy. According to the teachings of Islam, it is not permissible for members of the opposite sex to touch when not related.

Although I was expecting it, there was something about the difference of interaction that still bothered me. Still, even before we left the airport, I’d had more conversation and eye-contact with these visitors than I’d had with most of the men I met in Iran. In some ways, our first interactions were similar to meeting distant relatives.

This was exciting, and I was eager to see how our time together would play out. How would they respond to North American culture? Would they take me seriously in spite of my gender? Could I expect authentic engagement or a mixture of dismissal and condescension? In my effort to be taken seriously, would I harden my heart and make friendship impossible?

Over the 12 days we spent most of our times eating or waiting. We ate halal chicken and rice in the CMU cafeteria; ice cream sundaes at Harry’s home; and nachos, mini donuts and perogies in downtown Winnipeg. We waited at a clinic when one of the men required medical attention, at the Apple Store to get a broken iPad fixed, in the zoo’s glass tunnel for the polar bears, and for some of the men to find just the right gift for their wives.

When the group left Winnipeg and we said our goodbyes at the airport, there were no handshakes or hugs between me and them. Even though I know how seriously they take their religion and its teachings about women, I still felt like I failed as a feminist and that I failed at forming relationships.

A few days later, I received an e-mail from one of the men. He sent me greetings, a prayer request, photographs of his children and a note of gratitude: “I really appreciate all efforts you have done for this peaceful trip. . . . We ask God to give you the best possible reward.” This showed me the most beloved people in the man’s life.

In another e-mail, one of our guests referred to me as “sister.” I have a tough time using the word “friend” for someone who won’t shake my hand, but these e-mails demonstrate some kind of relationship between us.

We could not really connect on politics, culture or ideas, but through ordinary acts like eating and waiting, we forged a relationship.

Eating and waiting are two things we learn in church. We eat and drink the body and blood of Christ, and we wait for Christ’s return. We do this not so much as friends, but as strangers who have been made family under God. Perhaps a few of the Iranians, while not exactly my friends, have become like siblings to me.

I hope that I will get to meet with some of these young men again in the future. If we do, it will be interesting to see what and where we will eat together, and what we will be waiting for.

Lisa Obirek, 28, is a theology student at Canadian Mennonite University and a painter. She lives in Winnipeg and attends Bethel Mennonite Church there.

Lisa Obirek, a student at CMU, was one of the hosts when a group of graduate students from Iran visited the university in March. (Photo by Aaron Epp)