‘A beautiful way to make peace’ 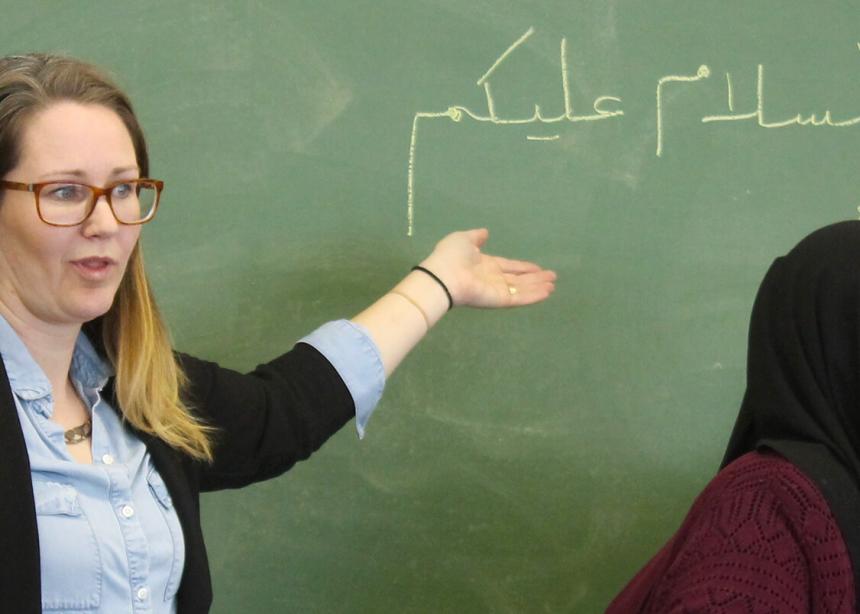 The best way to learn about a new culture is to experience it first-hand. Rosthern Junior College (RJC) Grade 10 students recently had the opportunity to learn a little about Middle Eastern culture when two Syrian couples, who came to Rosthern as refugees in 2016, shared with the students about their culture and their Islamic faith.

Dana Krushel and Evangeline Patkau of Mennonite Central Committee Saskatchewan’s migration and resettlement program, facilitated the April 5, 2017, culture-sharing workshop, entitled “Encountering new Canadians.” With the help of an interpreter, Mohamad Au Ibrahim and Mariam Al Mahmoud, and Yusuf Mlahefje and Israa Alsalo spoke about what it was like growing up and going to school in Syria.

They talked about the Arabic language and demonstrated how it is written from right to left. Students were encouraged to try their hand at writing in Arabic, first by copying the Arabic greeting Mahmoud wrote on the blackboard, then by writing their own names on coloured pieces of paper.

Students enjoyed a taste of Syrian culture in the form of a special tea prepared by Mahmoud. Sweetened and flavoured with cinnamon, the tea is poured over walnuts. Ibrahim and Mahmoud recently celebrated the birth of a son, and this special tea is traditionally served when a new baby arrives.

The Syrian newcomers also spoke about their Islamic faith. Students learned that, while the Qur’an is translated into many languages, Muslim prayers are only uttered in Arabic. Muslims see prayer as a means of drawing close to God, and prayers are recited five times a day. During Ramadan, Muslims fast between sunrise and sunset in order to remember what life is like for the poor and hungry.

Given that Alsalo wore a hijab while Mahmoud wore a niqab, students were curious about the difference between the two forms of head covering. Alsalo told students that both forms were acceptable, and that the choice to wear one or the other has more to do with “what area you are from” than with faith. Young girls typically begin wearing the hijab around age 10.

Teacher David Epp asked the Syrians what it was like for them coming to Rosthern. They admitted it has been “very hard.” Not only was the cross-Atlantic journey a first flight for them, but everything, even the food, was unfamiliar. It was a “very scary” experience, they said.

Krushel expressed appreciation for the culture-sharing experience. “Here we have come together to know and respect each other’s culture and religion,” she told students. “This is a beautiful way to make peace.” 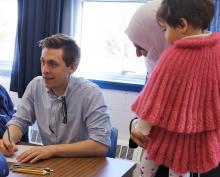