‘An ample opportunity to try something new’ 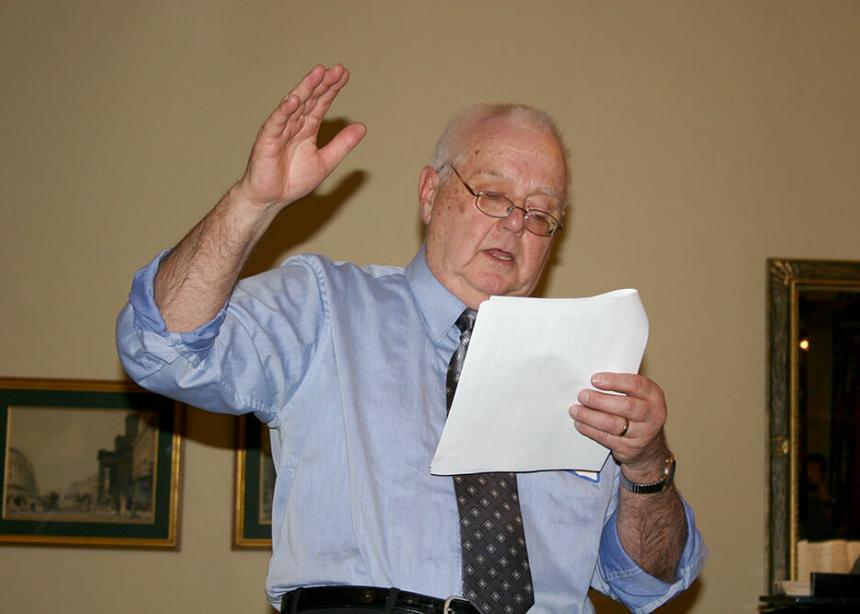 One could say that, in a musical sense, 1955 was the best of times and the worst of times when compared to today.

From a Swiss-South German Mennonite perspective, we were heirs to a rich tradition of unaccompanied four-part congregational singing that had its origins in the Singing School movement of the 19th century, when itinerant music teachers would come to a community—usually in winter when rural people had more free time—and teach the elements of shaped-note sight reading to adults. Most children of my generation were taught basic rudimentary aspects of sight singing in elementary school, while, at the same time, many mainline Protestant churches had flourishing choirs.

On the other hand, quality concert performances were a far cry from what they are today. The nearest thing to a concert hall in Waterloo Region was the Kitchener Collegiate Institute auditorium. In fact, it was the only public high school in town and there were no universities.

In 1955, the philharmonic choir had a long and storied history, but, with the approaching retirement of Glen Kruspe, was in a modest state of decline, later to be rejuvenated to its world-class status of today. So there was ample opportunity to try something new.

In the 1950s, a yearly musical highlight was when a touring college choir—including those from Goshen, Ind., and Bluffton, Ohio—would make an appearance in the area, all performing at a high level.

It’s significant that the co-founders of Menno Singers, Harold Good and Doris Moyer (they were married one year later), and Edith Shantz, were all graduates of a Goshen College touring choir.

During my two years at Goshen, at least 30 percent of the entire student population sang in one of a number of choirs. Not surprisingly, Menno Singers’ concerts during the first five or six years were modelled after touring college choirs. We sang entirely a cappella, in English, and what little income we received came from free-will offerings. It wasn’t until the spring of 1962 that we threw caution to the wind, hired an orchestra, charged admission and sang an entire two-hour musical setting of the Ordinary of the Mass in Latin. It was a daring experiment, but turned out to be a rather euphoric experience all around.

I wish that everyone could experience the unique joy of singing in a highly disciplined choir. Singing in a group is all about immersing oneself into a community of singers where, as one person said, the “I” or the “me” becomes “us.”

Anyone who has had that experience can resonate with the fourth-century bishop Ambrose of Milan, who wrote that “the singing of psalms creates a great bond of unity when all the people raise their voices in one choir.” That bond becomes real when a choir achieves the basic principles of unity as they apply to choral singing.

I learned something of this in week-long workshops with various eminent conductors. The basis of good choral sound is that within each vocal line there be a precise unity of pitch, unity of volume, unity of vowel, unity of rhythm, and a unified sensitivity to the climax and resolution of a phrase and the meaning of the text. When all aspects of good choral singing are in perfect sync, there is a great bond of unity that comes from the exhilaration of singing a perfectly executed phrase. The reward is in the singing itself.

We are living in the midst of a technological revolution that is altering the way we live and how we relate to each other. We can communicate with someone anywhere in the world at a moment’s notice, but that is no substitute for personal relationships in general, and, more specifically, for the intense communal and even mystical experience of choral singing. That is why I hope that flourishing choirs will still be around 60 years from now and that our educational authorities will have the wisdom to ensure that music be taught in our public schools.

Abner Martin, Menno Singers’ founding conductor, delivered this reflection at the choir’s 60th-anniversary concert at St. Jacobs (Ont.) Mennonite Church on Nov. 1, 2015. The repertoire featured favourites from the past, including Haydn, Palestrina and Willan.