Willard Metzger’s passion for climate justice and his respected participation in Canadian ecumenical bodies has garnered him an invitation to attend the United Nations Framework Climate Change Conference, Nov. 30 to Dec. 11, 2015, in Paris, France. He will attend on behalf of the Canadian Council of Churches (CCC). Metzger is executive director of Mennonite Church Canada Executive Director and is a CCC vice-president. In her letter of invitation, CCC general secretary Karen Hamilton acknowledged the “valuable voice of the Mennonite family in our ecumenical work” and Metzger’s “unique ability to bridge relationships across the various Christian expressions” in the CCC. Metzger sees the concern for climate justice as a natural extension of Christian faith. His pursuit of climate justice has garnered him meetings with a variety of high level politicians over the years. In 2011, he attended the 2011 UN Climate Change Forum as an observer for the World Council of Churches (WCC). –Mennonite Church Canada 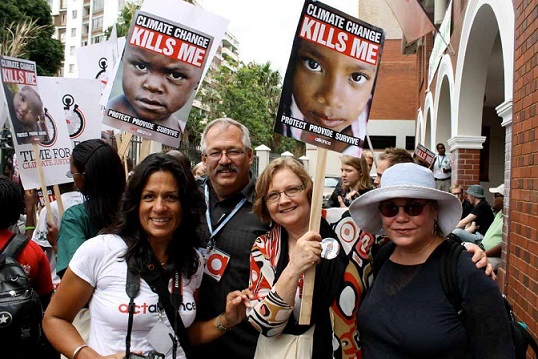 Mennonite Church Canada executive director Willard Metzger (second from left) together with other faith leaders participated in a march through the streets of Durban in support of climate justice at the UN Climate Change Forum in 2011. (Photo by Kaitlin Bardswich)