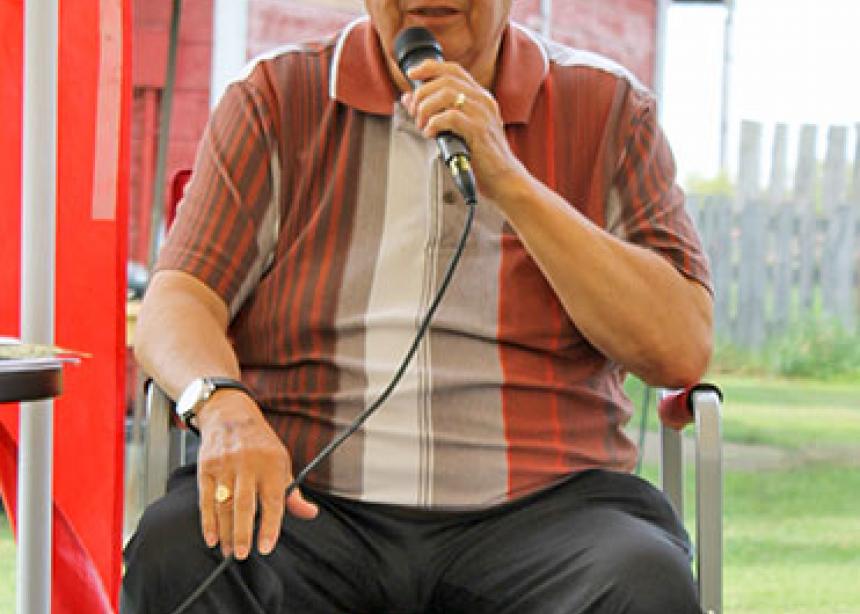 It may be a blip on the radar compared to other events of its kind, but what it lacks in size the Spruce River Folk Festival more than makes up for in heart.

The fifth annual festival was held on Aug. 16 at Spruce River Farm, north of Prince Albert, Sask., which is home to Ray Funk and Shirley Falstead of Grace Mennonite Church, one of the event’s sponsors, along with Mennonite Church Saskatchewan, MC Canada and Mennonite Central Committee (MCC) Saskatchewan.

The event began as a means of funding a $25,000 genealogy project for the landless Young Chippewayan First Nation. The project will trace the band’s ancestry in order to prove its entitlement to the land that was taken from its members. After five years, enough money has been raised to complete the project.

Now, Funk revealed that, under the auspices of MCC Saskatchewan, festival organizers are working towards establishing a land trust in order to purchase land for the first nation.

But in his response to the announcement, George Kingfisher, hereditary chief of the Young Chippewayan First Nation, responded: “It is not your responsibility to give us back our land. It is the government’s responsibility. But I thank you.”

The festival opened with a time of storytelling. Sol Sanderson, former chief of the Federation of Saskatchewan Indian Nations, told of how, in the 1830s, European powers implemented a policy of detribalization that is still in effect today. The policy included plans for the assimilation, integration, civilization, Christianization and liquidation of indigenous peoples around the world. It targeted family units and the destruction of indigenous societies, he said, as well as outlawing their governments, traditions and practices.

Healing needs to come from within, however. “We need to set up our own justice system with our own laws and jurisdictions,” said Sanderson, admitting, though, that “if we’re going to heal as a people, it’s going to take generations.”

Roland Ray spoke on behalf of another landless band, the Mathias Colomb First Nation, of Sandy Bay, Sask. He said the community lost its land when the Hudson Bay Mining and Smelting Company built the Island Falls hydroelectric plant to power its mining operations near Flin Flon, Man. The band is using ancient rock paintings to try to prove its occupancy of the land prior to the dam being built. “We were here 8,000 years [before white settlers arrived],” said Ray. “How do you legitimize that a people are not here?” Although Ray’s question was challenging, he urged, “Let us be friends.”

Few activities build friendship more effectively than music. As the storytelling ended, both first nation and Mennonite performers took the stage. Delicious food, including fried fish from the Wollaston Lake Fish Plant and soup and bannock from Kookum’s Kitchen on the Muskoday First Nation, satisfied festival-goers’ appetites all day long.

Then an afternoon of storytelling and reflection commemorated MCC Saskatchewan’s involvement with first nation communities through its Aboriginal Neighbours Program.

Stories reflected how MCC’s relationship with indigenous communities has evolved over the years, and focussed on “how to do that kind of work effectively and reflectively,” said Funk. He added that it was a time suffused with gratitude and warm feelings toward MCC Saskatchewan.

The afternoon was one of 12 celebrations in 2014 marking MCC Saskatchewan’s 50th anniversary. 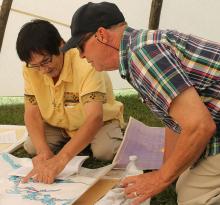