Hope and faith . . . even when things don’t go as planned

Two churches in rural Manitoba merge into one 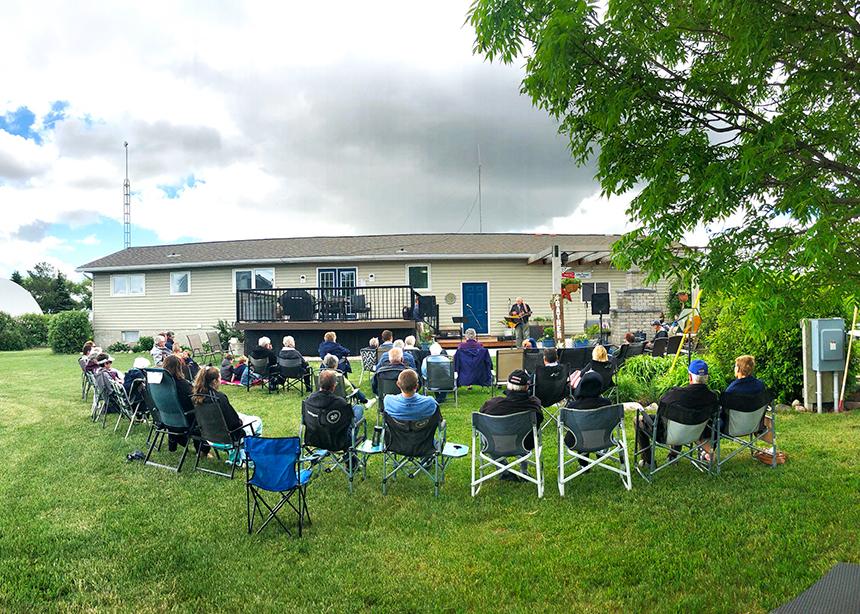 There is a new church among the farmlands of southwestern Manitoba, but it has more than a hundred years of history.

Crystal City Mennonite was founded in 1948, while Trinity began in 1976. Only 20 kilometres apart, the two churches had similarly sized congregations and, in 2006, they began sharing a pastor, Erin Morash.

The idea of coming together had been floating around for almost a decade, but the official process began two years ago, according to Morash, who is pastor of the new congregation. “Both churches, for country churches, are a healthy size, but it still leaves a really small number of people to do different jobs in the church,” she says. “We started to think about the possibilities of giving people a rest and increasing creativity if we got together and we took the workforce we had in the two churches and we combined it.”

During the first year of the process, each church facilitated conversations within its own congregation to give every person the chance to communicate their opinions and questions. Last November, the two churches voted to amalgamate, with strong support in favour of the union.

The second year consisted of logistics. The biggest issue was choosing which building to use and which to leave behind. “When an older couple gets married, whose farmhouse do you live at?” was how Morash described it at Mennonite Church Manitoba’s annual gathering in March.

To leave a deeply beloved faith home, which carries years of memories, is no easy thing. “As much as we like to think of the church as people, where we worship is still an integral part of it, especially in communities like ours, where people, they stay,” says Bill Tiessen, chair of Crystal City. “These are the churches where they were baptized and married and celebrated kids . . . and funerals for family members.”

A significant stumbling block came when a neighbouring Hutterite colony wanted to buy Trinity Mennonite, along with all the other buildings in Mather, last spring. Some Trinity congregants were against the proposition and some were for it, a situation that created tension and conflict.

After extensive discussion, the decision was made to use Crystal City’s building. The Hutterite colony bought Trinity’s structure and will continue to use it as a worship space, which is comforting to some and still just as disappointing to others.

Bernie Hildebrand, Trinity’s chair, says his fellow church members were anxious that others would just think their church was closing and joining Crystal City. “We tried to make a very strong effort at making sure that it was new for everybody. . . . it wasn’t a matter of just folding one up and going to the other,” he says.

Still, Prairie Mennonite lost a few families in the process, one citing the merger as the reason and two others leaving without an explanation.

“So it’s not that this did not cost us. It did,” says Morash. “And those are our neighbours, friends and family members, so that hurts. I think there’s an acknowledgment that we didn’t want to lose anyone. . . . My head was expecting that to happen, but my heart wasn’t.”

Although challenges were experienced throughout the long process, Tiessen says they benefitted from “a host of unique circumstances that made it go a lot smoother than it might have otherwise.” Sharing a pastor and worshipping together during the summer months for over a decade, plus living in a close-knit community, helped prepare them for the transition, he says.

However, they didn’t expect the obstacle that arose when they were finally ready to be done with two years of work.

“We were going to have our closing ceremony for each church, kind of a goodbye and a memorial and then, just before seeding, a celebratory opening up of this new congregation, and COVID hit,” Morash says. “It knocked the wind out of us, I think.”

But like she says in a video for Mennonite Church Manitoba, “In farming, hope and faith are not defined by things going according to plan, but by how you adapt and wait and take care of each other when things don’t go according to plan.”

After getting their crops in the ground, the approximately 70-person congregation slowly got things up and running. They voted on a name, worshipped together online and created care groups. On June 28, they gathered outside for their first in-person worship service. Despite the setbacks COVID-19 caused, Morash says it also gave the new church body a common experience to start out on.

Closing services for each of the former congregations and a celebration of the new one will take place at a later date.

Hildebrand says people are excited about the new energy and possibilities this change could bring: “So far it’s been very positive, and we’ll see how it goes from here.” 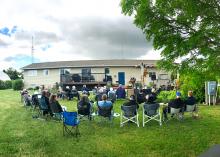 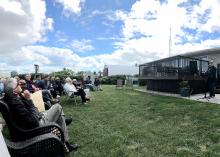 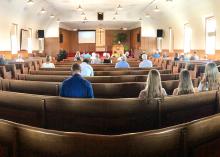 Prairie Mennonite Fellowship is located in the church building of former congregation Crystal City (Man.) Mennonite Church. Congregants and leaders are easily able to physically distance appropriately and are fine-tuning their worship to work during COVID-19. (Photo by Jill Hildebrand)

Two into one would be half; one into two is still two - if we’re talking arithmetic.

Two into one can also be seen as increasing is numbers, in size, in potential, in viability, and vitality.

With much appreciation for the process and processes involved in this gentle upheaval, not much distinguished from birth pangs of another visceral kind, I wish to express gratitude for the generous, gentle grace which has been poured into the lives of all currently within these congregations, on those of the past, and into many more who have sojourned amongst these folks, throughout the years.

I am particularly moved by the confessed humility and patience with which this current union, essentially re-unification of long ago scattered seeds, of/from various MC Manitoba congregations in the region, has come to this new season of fruition.

In my view, it is indeed hope and faith at work, along with all the vagaries, challenges, uncertainties and steadfastness in the process of discerning purpose, exercising of a common will, a commitment to the labour of collegiality, (agreeing to walk together), bearing and enjoying the fruit of the enlivening Spirit, in and through whose presence and power “all things are possible”.

May blessings continue to flow toward you, amongst you, and through you into the world around you, with neighbours, friends, proponents & opponents, even some of apathetic stance, as you now enhance and enjoy fellowship with one another, encouraging one another, giving evidence that you do, indeed, “love one another”.