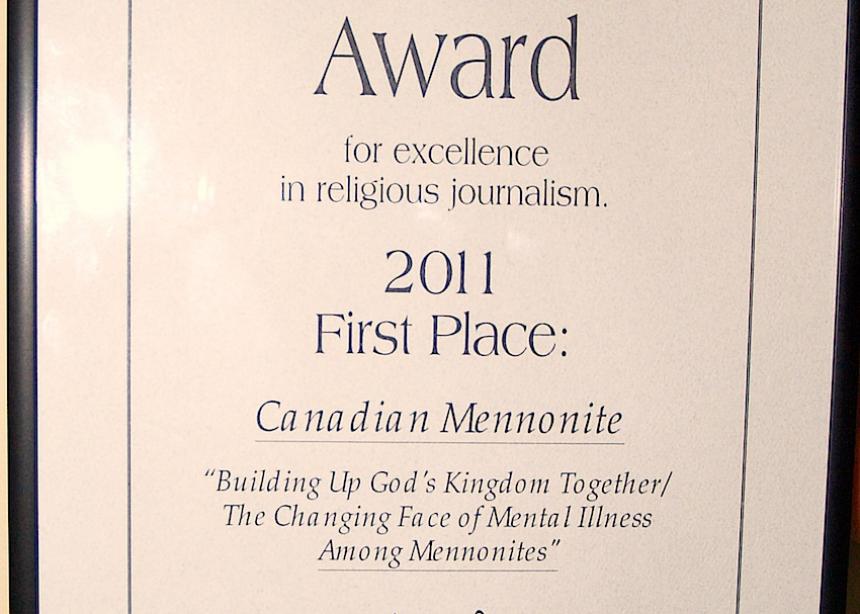 The $1,000 first place award was based on a feature on mental illness in the Feb. 21, 2011 edition entitled “Building up God’s Kingdom—the Changing Face of Mental Illness among Mennonites” with articles written by Joe Neufeld, Evelyn Rempel Petkau, Bryon Rempel-Burkholder and Ken Reddig.

“Comprehensive, ambitious and hugely under reported,” said the judge in recommending it, “this was a remarkable look at mental illness in our congregations and how the Church might help.  The depth of research, originality and relevance made this package stand out.”

The top award was one of a total of 10 taken away from the event, including another placing first in the category of service journalism for an article by Christine Longhurst on “Paying Attention to the Words We Sing.”  Judges called this “an excellent take on a topic rarely discussed—courageous and needed; excellent use of song lyrics to illustrate the point.”

Earning second place for a front cover was the Oct. 3, 2011 “Say No to the Logo,” designed by Managing Editor Ross Muir and Designer Dan Johnson on an inside article questioning the militarism in the new Winnipeg Jets logo.  Another second was earned in the Biographical Profile category by Dave Rogalsky for an article on retired Canadian Broadcasting Co. (CBC) music commentator and choral conductor Howard J. Dyck of Kitchener entitled “In Gratitude of J.S. Bach.”

The magazine also placed second in the Letters to the Editor category with the judges characterizing them as “strong issues with an obviously engaged and thoughtful readership, with clear views.”

Third place honours were given in the media reviews category for book reviews by Vic Thiessen, David Driedger and Will Braun, a column by David Martin on “’Mennonite’ Not Eaten Here,” for a news story by Muir on “Bolivian Mennonite Rape Trial ends in Conviction,” and in the In-Depth Treatment of a News Event category for the various writers on sexual inclusivity issues presented at MC Canada’s national assembly in Waterloo.

The top award and the total number of awards is a “first” for the biweekly publication, says Dick Benner, editor/publisher.  “It is deeply gratifying to receive this kind of approval from professional peers in religious journalism.  It is a credit to our staff and many writers and contributors."

The competition for these honours is among such mainline publications as the Catholic Register, Anglican Journal and the Presbyterian Record, publications with much larger circulations and constituencies, Benner said.

It’s nice (but not surprising) to see other denominations recognize what Mennonites have long known: CM is a top-notch magazine. Congratulations on your award! You deserve our thanks for connecting Canadian Mennonites spread across a country with too much geography.