Birthday wishes and other first-world problems 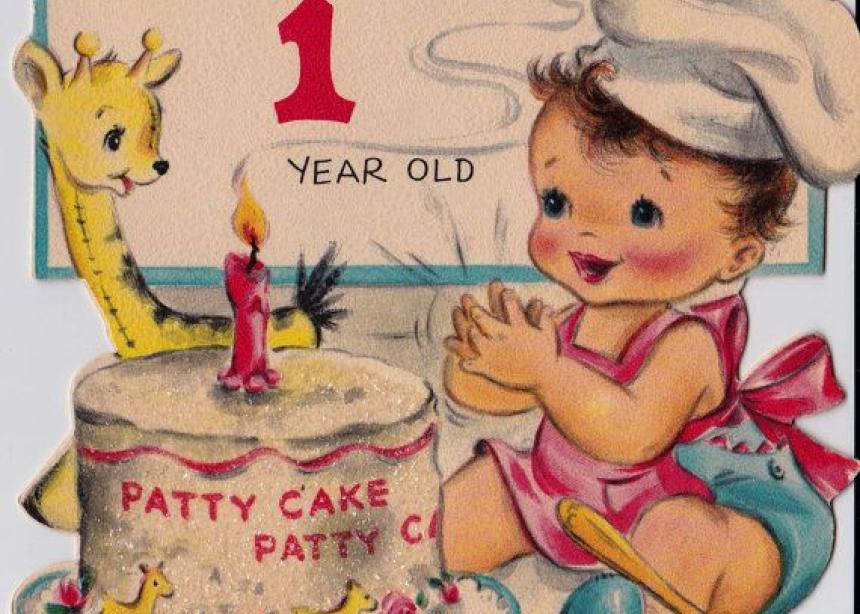 This past week we celebrated a pretty significant birthday in our family. Baby E, who will now be referred to just as E, turned one! I am experiencing every emotion possible.

Like every mother, I wanted to make E’s birthday special. I wanted her present to be thoughtful, useful, and oh-so-fun. I hand-painted her a card to show just how much I love her.  I invited her favorite people over to help us celebrate, and I thought long and hard about just what her first cake should be.

And, like every one-year-old, she could’ve cared less. She just wanted to go about her day like it was any other day—which means she wanted to sit in her giant cardboard box. I could learn a lot from her laissez-faire attitude, because for all the planning and stressing I did, nothing turned out as planned. E didn’t care for her present. In fact, she cried when we put her brand new bicycle helmet on. She tried to eat the card which her older sister, Boo, had already colored on. And the party sorta came to a sudden halt when Boo got the stomach flu. And no, we didn’t even get to eat cake. Here’s the kicker: because there was no cake.

That’s right. I did not make a fancy cake for my daughter’s birthday. I wanted to. I wanted it to be awesome. I wanted it to be beautiful, delicious, decadent, and yes, a little bit healthy. I had decided on a nice trifle –layers of angel food cake, topped with vanilla pudding, cool whip, and for a healthy kick, sprinkled with fruit.

I felt good about my decision, until my little eyes wandered to the ingredients lists on the Cool Whip container. Palm Oil. Visions of rainforest decimation and orangutan genocide flashed through my mind. No good. I decided to substitute such an evil product with wholesome whipping cream instead. At least I could understand that ingredient list. But by now there was no stopping me. The “tartrazine” at the end of the lengthy pudding ingredients warranted a google search and I decided I didn’t want to feed my baby tar. Not yet. Fortunately, my trusty Living More With Less cookbook carries a delicious homemade pudding recipe. I could use that instead. The selection for frozen organic berries was discouraging, especially when most of my options came from South America. I got lucky and grabbed an excessively-packaged bag of “local” Canadian blueberries and, feeling overwhelmed, grabbed a quick box of angel food cake mix and headed home.

Only at home, with homemade pudding bubbling on the stovetop and two happy little ones licking the whipping cream beaters, did I finally glance at the box of angel food cake mix. There, at the bottom of the ingredient list, was sodium lauryl sulphate. SLS. My eyes have been trained to spot this on all my cosmetics, and I pay way too much for shampoo just to avoid pouring this on my head. And now here it was, ready to be ingested by my little children.  It was just too much. I halted the cake chaos.

And so, on E’s birthday we had pie. Homemade pie made with pumpkins and rhubarb and raspberries picked from my mom’s garden, with a flaky crust made from grains my mom bought from the organic farmer she personally knows. It was good comfort food and I felt guilt-free letting E smear her face with pumpkin puree and whipping cream.

Yes, I know that these chemicals are present in trace amounts. That’s how I justify my own consumption of them. But when you are small, one-year-old small, trace amounts are just too much.

But there will be more birthday cakes and more sweet treats and more meals to share together. I can’t police everything my children put in their mouths and I certainly can’t police everything that is put into our “food”. Yes, I can read ingredient lists and try to do home-made as much as possible, but sometimes, what is meant to be sweet and fun and delicious just leaves a bad taste in my mouth.

I can’t fight the food industry every day, but it’s the least I can do on my little girl’s birthday. And because last week we also celebrated Pi Day, here’s a link to something delicious! 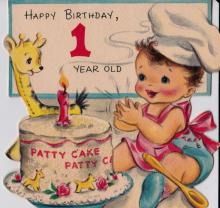