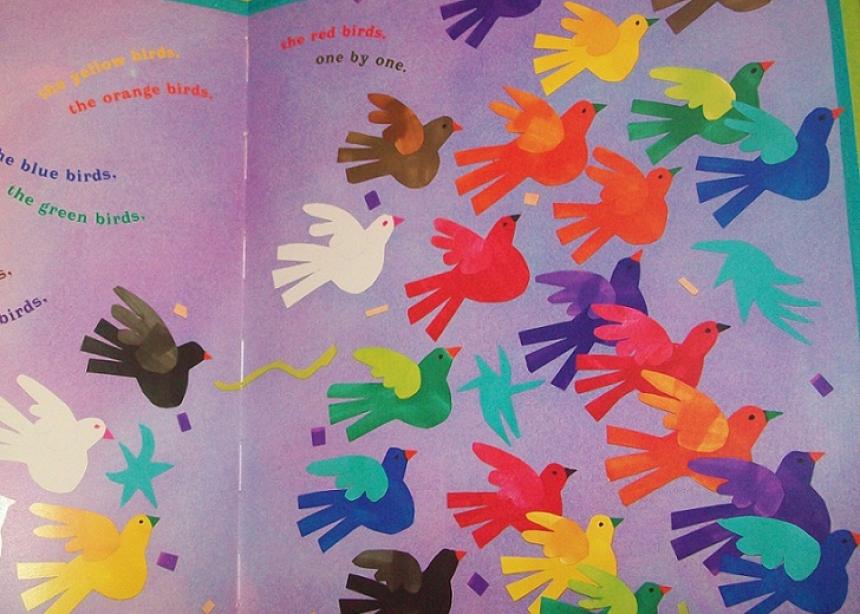 One of Tomie dePaola's beautiful collages in The Song of Francis. (Photo by Susie Guenther Loewen)

<p>One of Tomie dePaola's beautiful collages in The Song of Francis. (Photo by Susie Guenther Loewen)</p>

I was happy to discover another gem of a children’s book on the subject of faith at my public library recently: it’s called The Song of Francis, written and illustrated with beautiful, vibrant collages by Tomie dePaola.[1] It’s another one of my son’s current favourites.

The story is about the Christian monk and mystic Francis of Assisi (1181 or 1182-1226 C.E.), who “was so filled with the love of God that he wanted to sing, to tell everyone how much God loved them.” So Francis began to sing, and was joined by the Sun and the Moon, birds of all the colours of the rainbow, and the angels, who come to hear and watch the singing.

The text is simple enough for a toddler to follow, yet it coveys key aspects of Francis’ mystical theology: he isn’t called “Saint Francis” at all in the book, but instead bears the much more humble name, “Francis, the Little Poor One,” which is a reference to his monastic vows of poverty or simple living; he refers to “Brother Sun” and “Sister Moon,” which speaks of a sense of familial connectedness with all of creation; he invites the Sun, Moon, and birds to “bless the Lord, because the Lord loves you,” which coveys a sense that all of creation is beloved by God and in turn praises God, the Creator.

I also appreciate that the angels descend from heaven to witness the beauty of Francis’ song, suggesting that heaven and earth are not starkly separate or ordered hierarchically, but are rather integrated. My only complaint is that the angels are depicted exclusively as fair-skinned and blond.

Otherwise, the book is a wonderful introduction to this important figure from Christian history, who, as you may know, is the patron saint of animals and the environment, the originator of the nativity scene, and widely believed to have authored the prayer, “Lord, Make Me an Instrument of Your Peace.”[2] It also introduces children to the mystical tradition within Christianity (and beyond), which emphasizes the love and praise of God, union between people and God, and union with creation, which God infuses (what is known in theological terms as panentheism – not to be confused with pantheism!). With its sense of wonder and the overflowing love of God, this tradition appeals to and makes sense to young children in particular.

So if you’re looking for more summer reading for the 2- to 5-year-olds in your life, here’s a book that explores the love of God and depicts every colour of bird you could possibly think of. Why not go and see if your public library has this book, too?

[2] For more sources on Francis’s life and writings, see: https://en.wikipedia.org/wiki/Francis_of_Assisi 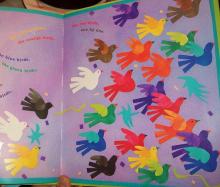 One of Tomie dePaola's beautiful collages in The Song of Francis. (Photo by Susie Guenther Loewen)