On confessions of faith 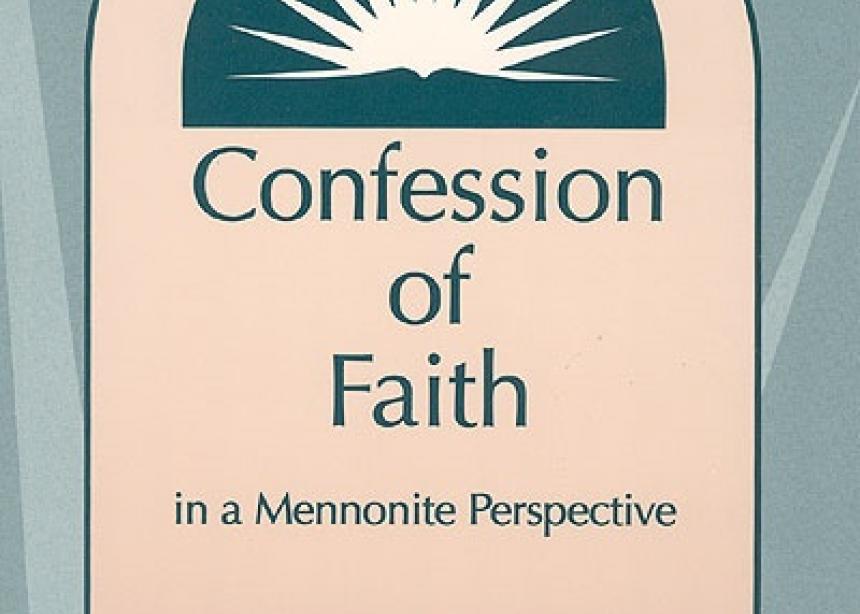 Briefly put, the conference voted to uphold the position of the Confession of Faith in a Mennonite Perspective (1995), which they interpreted as not supporting the blessing of same-sex marriages nor affirming the leadership of LGBTQ people. They also voted not to revisit these questions for the next four years.[1] This vote, as well as the way in which LGBTQ people were excluded from the whole decision-making process (which meant decisions being made about them and without them), caused a lot of hurt and prompted the Mennonite LGBTQ advocacy group Pink Menno to stage several nonviolent but confrontational acts of protest.[2]

The unfolding of this process and the confrontations that followed left me thinking hard about whether that’s where we as Mennonite Church Canada are headed as well, with our Being a Faithful Church (BFC) process (about the Bible and sexuality). I deeply hope we aren’t headed in this direction, and yet the latest BFC responses are just one instance of the impulse of many to turn to the Confession of Faith (1995) and the statements on sexuality from gatherings in Purdue (1987) and Saskatoon (1986) and to use them as MC USA has.[3]

What I find most troubling is precisely the way in which these statements—especially the Confession—are being used. So I did some thinking about why this was troubling to me, and here’s what I came up with:

1.  It’s a misuse of the Confession of Faith.

Let’s step back for just a minute. What is a confession of faith? It’s a communal statement of the beliefs and practices that we share as Mennonite congregations and members. It’s not a contract. It’s not a policy manual. It’s not a rule-book. It’s more like a covenant, representing our relationships with one another as sisters and brothers in the (Mennonite) church. So this kind of a shared statement of what we have in common can’t be “enforced” against those who are “at variance” from it—precisely because it’s a descriptive, not a prescriptive statement.

Rich Preheim wrote about the origins of the Confession in a recent Mennonite World Review column, and here’s what he said: “MC and GC Confessions of Faith, while defining orthodoxy, never were used as doctrinal instruments of punishment, at least not on the church wide level. In fact, the General Conference Mennonite Church never even had a Confession of Faith until 1995. That reflects its origins and congregational polity. In 1860, a disparate group of congregations decided to do together what they couldn’t do separately, such as foreign missions and higher education, while respecting everyone’s understandings of belief and practice.”[4]

So, it’s not even in keeping with the history of the Confession to use it as a policy manual or rule-book.

Though the Confession is a statement of shared belief, that doesn’t mean that there’s perfect agreement on every article or topic it discusses. I know there are congregations who refuse to ordain women as pastors, despite what the Confession says about women and men being called to ministry. I know there are Mennonites who don’t agree that the church should be pacifist, or who think the Confession’s statements on peace don’t go far enough, since they’re more about nonresistance than active nonviolence.

So why is it that we’re singling out the article on marriage and talking about “variance”? If we start down this path, I doubt there’s a single article in the whole thing upon which every single member of MC Canada would completely agree!

There are many disagreements with the Confession, precisely because we are the church, a body of diverse members and a priesthood of all believers, not a hierarchy or a body of identical members. If the New Testament is any indication, not even the early church was about bringing identical people together (e.g. Gal. 3:28)! In fact, this diversity of members and gifts is one of the most beautiful, mysterious, and (quite frankly) difficult things about being the church.

I know a number of lesbian, gay, and trans Mennonites, many of whom have gone through difficult and prayerful struggles with self-acceptance, and are also deeply committed to their faith and to remaining part of the church they love, including having the church marry them. A number of their families and congregations have discerned a call to support and welcome these people as beloved members and even leaders; this is the case within MC USA and MC Canada alike, in many different regions.

There is a strong desire by LGBTQ Mennonites and their supportive “allies” to be heard by the wider church. But without even making a formal space to hear these stories, the wider church body in the U.S. has appealed to a 20-year-old statement of shared beliefs as if it were a timeless list of rules and declared that the decision will not be revisited for at least the next four years. Instead of listening to the minority, the wider church body has silenced it, behaving as a democracy in which the majority “wins” instead of as the church, which is called to look especially to the needs of the least and the most vulnerable (Matt. 25).

This is what I’m thinking about as we approach the final part of the MC Canada BFC process. If, as I’ve said, the Confession of Faith is not a rule-book but rather a covenant, representing that we as the Mennonite church are brothers and sisters in Christ, let’s not use it to harm one another or to cast doubt on the faithfulness of the minority of congregations who have discerned a new path as God’s will.

We’ve agreed not to use the Bible against each other, so let’s not use the Confession this way, either. If this document no longer represents all of us, that doesn’t mean it’s time to single out those who are “at variance” with it! That means that after 20 years, it’s time to at least revise the document (I, for one, was a young child when it was published in 1995!).

And let’s remember that the church is not about enforcing or controlling the faith—it’s about trusting God to bring its many, varied members together, united in Christ and by the Spirit who brings us peace which passes understanding (Phil. 4:7).

[1] You can read the full resolution that passed here.

[2] You can read the Pink Menno press release here and a report of what happened here.