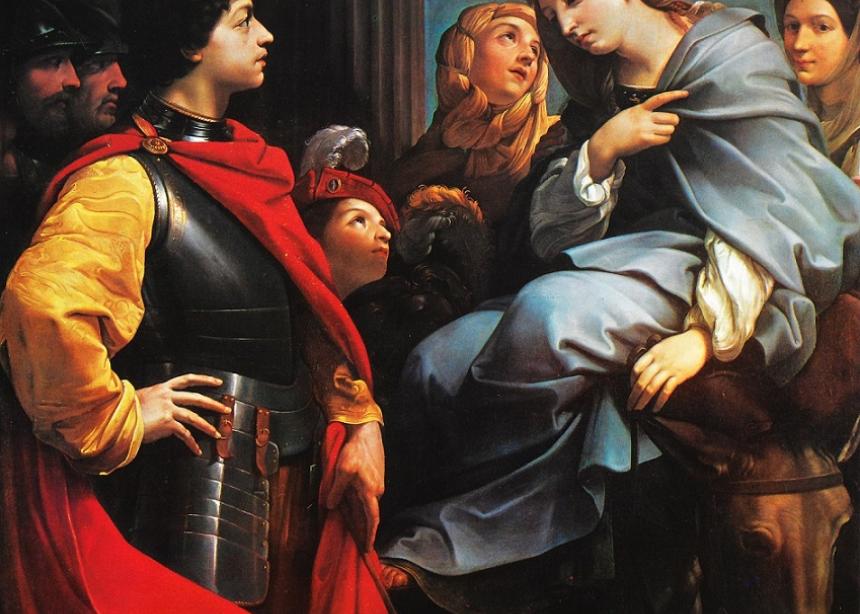 This week I was reminded of a biblical figure who is often overlooked: Abigail (or, as my Bible disappointingly calls her, “the wife of Nabal”!). Her story is found in I Samuel 25. I find it intriguing as a woman and as a Mennonite pacifist, because Abigail is, arguably and perhaps unexpectedly, a master peacemaker, someone who prevents a lot of needless bloodshed through her wise and well-timed words and actions.

To summarize her story briefly: Abigail, a woman described as “clever and beautiful,” is married to Nabal, a man who is reportedly “surly and mean” (I Sam. 25:3, NRSV). David, who is not yet king, is travelling through Nabal’s territory with a small army, and he sends a message to Nabal. It begins, “Peace be to you, and peace be to your house, and peace be to all that you have.” David continues by asking that since he and his army have not hurt Nabal’s shepherds or sheep while travelling through, and in fact protected them, could Nabal provide them with a feast? In other words, having acted honourably toward and protected Nabal’s property and servants, David and his men ask for his hospitality in return. But Nabal refuses to provide a feast for them, since they are strangers and nobodies as far as he’s concerned.

Upon hearing this message, David is furious, and issues his orders: “Every man strap on his sword!” And his 400-person army obeys.

But Abigail hears about her husband’s insulting behaviour towards David, the way he returned “evil for good,” and she acts quickly to right the situation. She gathers a feast’s-worth of food, loads it onto donkeys, and rides out herself on a donkey to meet David and his soldiers. She apologizes profusely, asks for David’s forgiveness, takes responsibility for the misunderstanding, reminds David that Nabal lives up to his name (which means “folly”!). She assures David that she did not see the messengers he sent—otherwise, the response would have been much different! She speaks self-deprecatingly (calling herself a servant and David “lord” and the future “prince over Israel”), but she also, interestingly, makes her case theologically, telling David that God “has restrained you from bloodguilt and from taking vengeance with your own hand” and that God will bless him in the future because he “shall have no cause of grief, or pangs of conscience, for having shed blood without cause or for having saved himself” (vv. 26, 30-31).

And Abigail’s ingenious speech (sermon?) about how it would be against God’s will for David to carry out his plan of violently attacking Nabal’s household is so masterfully argued that he’s immediately and wholeheartedly convinced! He even speaks of Abigail as God’s own emissary.

“Blessed be the Lord, the God of Israel, who sent you to meet me today!” David says to Abigail. “Blessed be your good sense, and blessed be you, who have kept me today from bloodguilt and from avenging myself by my own hand! For as surely as the Lord the God of Israel lives, who has restrained me from hurting you, unless you had hurried and come to meet me, truly by morning there would not have been left to Nabal so much as one male” (vv. 32-34).

So instead of slaughtering Abigail and her whole household, David and his army share the feast that she provides for them. David’s farewell words to her are: “Go up to your house in peace; see, I have heeded your voice, and I have granted your petition.”

Abigail returns to her house and eventually tells her husband about how she made peace with David and prevented his army from unleashing violence upon them. Nabal is so shocked that “his heart died within him; he became like a stone.” He dies ten days later, leaving Abigail free, in a strange twist, to become David’s wife—or rather, one of David’s wives. She clearly made quite an impression on him!

I appreciate how this story bends or even subverts our expectations on a few different levels. For one thing, it’s a story about a non-Israelite teaching David a lesson about a theology of peace. The story just preceding it is about how David has a chance to kill Saul (then the king of Israel, whom David will succeed) but decides not to, and Saul’s expression of gratitude. He says to David: “You are more righteous than I; for you have repaid me good, whereas I have repaid you evil” (I Sam. 24:17).

Just after this act of mercy on David’s part, he is about to turn to violence again because now Nabal has returned “evil for good,” but Abigail, through quick thinking, an articulate speech, sound theologizing (she clearly knows about Israelite notions of bloodguilt), and a generous act of hospitality, reminds David to again exercise mercy. Not only that, she reminds him that God wants him to repay evil with good instead of further evil, to act with mercy instead of violence or vengeance—a message which must have turned David’s own expectations about these non-Israelites on their heads.

It’s also notable that Abigail is a woman. Though there are ways in which she falls into more traditional/patriarchal gender expectations, especially in her almost annoyingly self-deprecating servant-language for herself and overly-elevated language for David in her speech to him—not to mention her later agreement to become part of his harem of wives!

But in other ways, she’s a wise, courageous, and defiant peacemaker—even David praises her “good sense.” She takes initiative (and defies her husband) to prevent the disaster which her husband’s foolishness (i.e., macho posturing) has brought on their entire household, and she takes the considerable risk of meeting David and his army of 400 in person (which her husband never did) to speak convincingly about peace and to offer a delicious feast (of bread, wine, mutton, raisins, and figs!).

Armed only with words and food, Abigail faces an army! What a beautiful example of the love of enemies in action! In this way, amazingly, she makes peace and she ends up feasting with David and his army instead of becoming a helpless and tragic victim of their violence.

Finally, this story subverts our smug Christian assumptions that the Hebrew Scriptures (Old Testament) are saturated with violence, while the New Testament contains a brand-new, unprecedented message of peace. These assumptions far too easily slip into Christian supersessionism (the belief that Christians replaced Jews as the chosen people of God).

Honestly, how many of us would think of the combination of “Old Testament” and “peace” as a bit of an oxymoron? But in this story, as in others in the Hebrew Scriptures, we catch a glimpse of a thread of pacifism, nonviolence, or peace theology that is unquestionably rooted in the Jewish tradition (and thus runs throughout the entire Bible, not just the New Testament).

In this way, we can think of Abigail as a forbear in faith—a fellow peacemaker in the tradition of Jewish pacifism—to Someone in the later lineage of David who also rode on a donkey, feasted instead of fighting, spoke eloquently of peace, and (admittedly, much more famously) advocated the love of enemies. 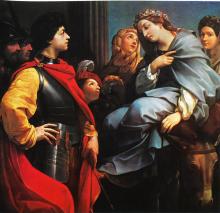