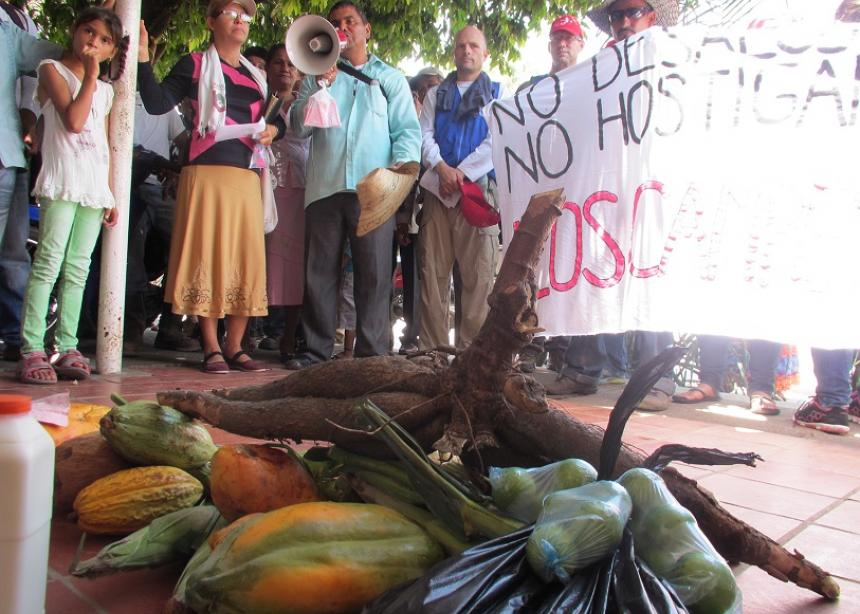 In his famous address at 1984 Mennonite World Conference, in Strasbourg, France, Ron Sider described shalom as “being in right relationship with God, neighbor and the earth.” Shalom, he said, “means not only the absence of war, but also a land flowing with milk and honey. It includes just economic relationships with the neighbor. It means the fair division of land so that all families can earn their own way. It also means the Jubilee and sabbatical release of debts so that great extremes of wealth and poverty do not develop among God's people.”  (Ron’s entire speech, God’s People Reconciling, is here.)

When I walk through the community of El Guayabo on a peaceful day, shalom is what I see. People live together, worship together, farm together, and welcome strangers into their homes with warm hospitality. There is plenty of food for everyone, even a surplus to feed the neighboring towns. The recent illegal eviction attempt that violently disrupted peace in this community was not only unethical, but also tainted a lifestyle that is holy, a lifestyle that I believe is pure and pleasing to God.

In his speech Sider quoted Isaiah, who says that the result of justice—like shalom—is peace (32:16-17). He claims that “if we try to separate justice and peace, we tear asunder what God has joined together.”

It was in the spirit of uniting peace and justice that the communities of El Guayabo and Bella Union gathered to publicly pray and call for transparency in Puerto Wilches, on the morning of Monday, August 11, 2014. They used songs, Bible verses, speeches, and a dramatic act during the public action they carried out to bring attention to the recent illegal eviction attempt made by riot police. During the planning stage, El Guayabo leader Eric told the Christian Peacemaker Team delegation that the goal of the action was to spread awareness about the eviction attempt in Puerto Wilches, the largest town in their municipality. After visiting the municipal office and the Centre for Coexistence, the group surpassed that goal and was granted a meeting with the mayor.

When they arrived at his office, the farmers knelt, each placing a different crop from the most recent harvest on the pavement outside the entrance. CPTers then moved forward with palm branches and placed them so that they symbolically covered the crops, as a delegate listed aloud the harmful consequences that a lack of transparency would have for the community. The delegation then publicly stated their support for the community as the mayor looked on. At the conclusion of the action, a delegation leader gave to the mayor a petition that was signed by 180 international partners.

The petition called for the police inspector to adhere to the legal eviction process and insure that there was clear communication with the community. At this point the mayor invited a small group to meet with him in his office. Unwilling to yield just yet, Eric took the microphone and named specific complaints that the community had regarding who signed the eviction notice, so that everyone could hear. It was brilliant to witness someone speaking truth to power so confidently.

Then, the leaders of the communities gathered, and two members from each accompaniment organization were selected. A group of ten of us entered the office. We learned through the discussion that the mayor had not signed the document allowing riot police to attack the community, but in fact it had been an unknown palm oil company that had allegedly ordered the eviction.

The community was pleased with the progress they had made. We parted ways after a round of hugs and thank yous. The news left us feeling uneasy though, because this is not the first time we have interacted with palm oil companies. We know that palm trees sap nutrients from the soil, rendering it useless for subsistence farming. The good news is that the community has lived on the land for 30 years, and is not going to give up the fight. We ask for prayers as we move forward. 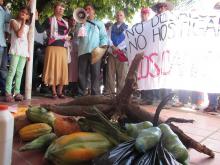