‘As we forgive those who trespass against us’ 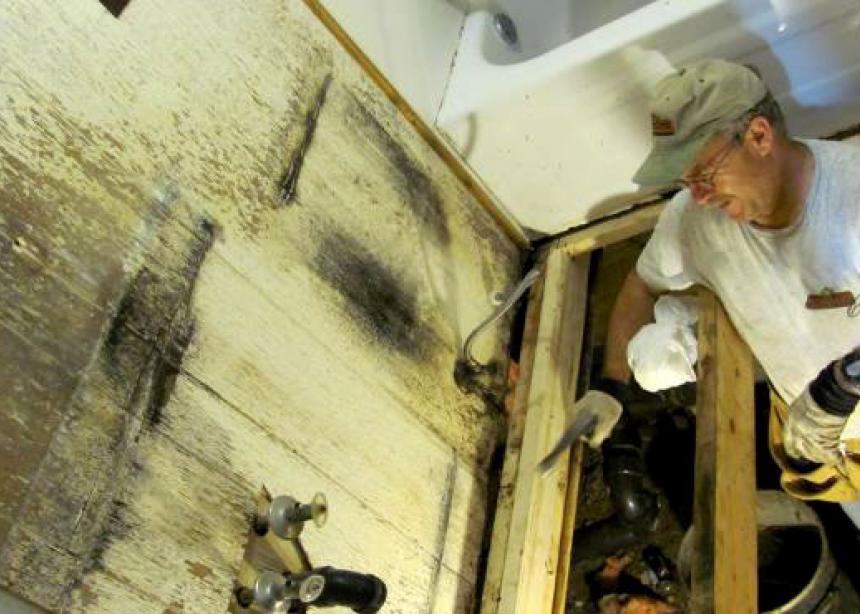 Mark Bauman’s eyes still tear up when he recalls worshipping at the St. Francois-Xavier Roman Catholic Church in Attawapiskat. Most of the service in the First Nation community, located on the western shore of James Bay in northwestern Ontario, was in Cree, but the Lord’s Prayer was repeated in English.

It was when the congregation got to “forgive us our trespasses, as we forgive those who trespass against us,” that it hit Bauman. They were praying for him, a representative of non-aboriginal Canadian society, with whom they were often in conflict. But they were forgiving him, and the governments and churches that have not understood them, their culture or their love of the land.

Bauman, a project manager for Menno S. Martin Contractor Ltd. in St. Jacobs, Ont., and a member of St. Jacobs Mennonite Church, was part of a four-person Serving and Learning Together (SALT) team that went to Attawapiskat in March under the auspices of Mennonite Central Committee (MCC) Ontario, to help restore some of the houses there to safe liveable standards. Also on the team were Chris Frere, a retired teacher from St. Anns, Ont.; and Lyndsay Mollins Koene and Rod Ryner, of the MCC Ontario Aboriginal Neighbours program.

While Bauman was the only carpenter on the team, all became involved, working side by side with members of the Attawapiskat community. Together, they tore up rotten floors and mouldy wall board, replacing them and the insulation; they also did some plumbing and repairs.

Even with the small group—a larger team had planned to go, but were stymied by logistical details—the four had to scrounge for materials, as the winter snow roads were breaking up in the unseasonably warm March weather. Frere said she saw people purchasing building supplies for two and three times as much as what she would pay in the Niagara area of southern Ontario.

According to both Bauman and Mollins Koene, the situation in aboriginal communities like Attawapiskat is complex and painful. Dealing with the federal and provincial governments over money issues, clean drinking water, schools, housing, and the residue of generations under the residential school system—which demonized aboriginal language and culture—are all very much part of residents’ day-to-day lives.

Bauman and Frere say they both appreciated the sensitivity training they received in Timmins before arriving in Attawapiskat. That, and their experiences in the community, have led them to see and hear news reports from a different perspective. According to Bauman, reports of the $90 million spent in the community fail to mention that $30 million of this is for a new school, and the remainder is spread over five years in a community where everything is three or more times as expensive as it is in the south.

A news report Bauman saw about Attawapiskat ended with a tattered Canadian flag, the maple leaf torn off by the wind, flapping sadly. While there, though, he saw many whole flags flying, and the maple leaf symbol proudly displayed alongside native symbols.

Bauman also says he learned that, while Treaty 9, which is the agreement between the Cree of Northern Ontario and the federal government, reads that the Cree people “cede” the land to the government, oral tradition says that the elders invited the newcomers to “share” the land. Journals from participants in the treaty negotiations agree with the aboriginal memories, but the aboriginal signatories could not read the English document they were signing.

Mollins Koene reports that the SALT team is only one part of a larger response by MCC Ontario to the situation. The organization has sent 1,000 blankets, 500 hygiene/health kits and 25 relief kits; arranged for a bilingual Cree/English Christmas card to be available for MCC Ontario constituents to send north; and took part in a housing conference in the community.

From his conversations with Attawapiskat First Nation Chief Theresa Spence, elders and residents, Bauman feels that solutions for the community must come from both within and without, and the parties involved must refrain from blaming each other.