‘Before the watching world’ 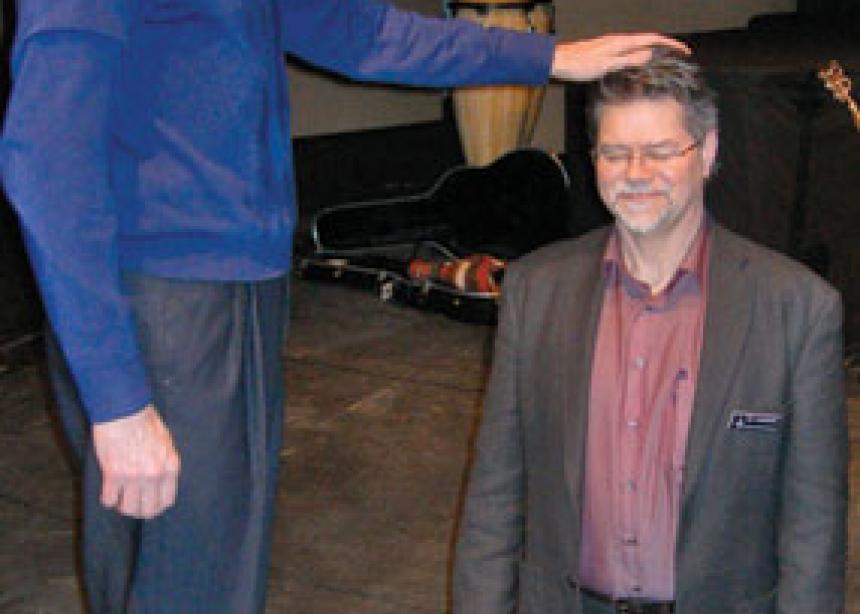 Henry Kliewer, standing, the director of Mennonite Church Manitoba Leadership Ministries, offers a prayer of blessing during the commissioning serv-ice for Ken Warkentin, the new executive director for MC Manitoba. “I am looking forward to the significant challenges that lie ahead,” said Warkentin, who has been involved in church work for 29 years.

The annual Mennonite Church Manitoba gathering did not bring forth momentous decisions, but it did cause the 147 delegates—representing 37 of the area church’s 50 congregations—to occasionally squirm uncomfortably, express exasperation at times, and grapple with several challenges.

The 64th annual gathering of the area church was held at Mennonite Collegiate Institute, Gretna, on Feb. 25 and 26. Two keynote speakers gave their perspectives on how the Mennonite church should conduct itself “before the watching world,” the theme of the two-day event.

Citing Jeremiah 29, Phil Wagler, Canadian Mennonite columnist of  “Outside the Box” and pastor of Gracepoint Community Church in Surrey, B.C., compared the Mennonite church in today’s world to the exiled Israelites in Babylon. God had no intention of rescuing them quickly, said Wagler: “The message they needed to hear was God’s call to embrace their exile and to work for the benefit of the community to which they had been exiled.” Not an easy mandate in a society that puts so much emphasis on individualism, he said, adding, though, that it is the only way the church will secure its own welfare.

Aiden Enns, Canadian Mennonite co-columnist of “New Order Voice” and founder/editor of Geez Magazine, said, “I don’t think we are exiles. I think we are in the belly of the empire . . . . If we enjoy the spoils of the empire, I’m saying that is a bad thing. If we stand idly by, we are complicit. Jesus, like Jeremiah, had a bias for those who are suffering and for the disenfranchised. To have a more vital connection with God, I don’t want to wait around in comfort, but I want to share the same bias as Christ.” Enns urged the delegates and MC Manitoba as a body to “struggle with what to do with our wealth and privilege.”

As delegates discussed the passions and activities in their churches, it was apparent that many are either involved in outreach in their communities or looking for ways to be more engaged. Community pastors, neighbourhood clubs, and projects for the homeless and destitute were a few examples of how churches are trying to be an active presence in their communities.

“If your congregation was no longer here, who would notice? It is also a good question for MC Manitoba,” said Norm Voth, director of evangelism and service ministries.

“As Mennonite churches in Manitoba, we work very much alone, though,” said one delegate. “We don’t know much about each other. Could MC Manitoba be more of a clearinghouse? Could it provide places of connection?”

Board and staff also wanted to hear from the delegates about the governance structure for the camping ministry.

Delegates were reassured that “MC Manitoba will continue to own the camps,” said board chair Hans Werner.

Delegates expressed some exasperation with the process to change camp governance:

A camp task force has been appointed and will continue the process of determining a new governance model.

Werner updated delegates on other aspects of the New Directions document presented at the February 2010 annual meeting. “Phasing out reference groups and working towards project teams has not begun yet,” he said, adding that the board is continuing its work on improving ways of communicating, including a re-working of the website. “We want to place more emphasis on the executive director being the ‘face’ of MC Manitoba,” said Werner.

MC Manitoba treasurer Tom Seals presented the $1.8 million budget for 2011, which was approved by the board last November after the fall delegate session failed to reach a quorum. The church giving part of the budget remains the same as 2010—$691,779—which represents an actual 3 percent increase in giving from the churches because of a $32,366 shortfall last year.

Henry Kliewer, standing, the director of Mennonite Church Manitoba Leadership Ministries, offers a prayer of blessing during the commissioning serv-ice for Ken Warkentin, the new executive director for MC Manitoba. “I am looking forward to the significant challenges that lie ahead,” said Warkentin, who has been involved in church work for 29 years.