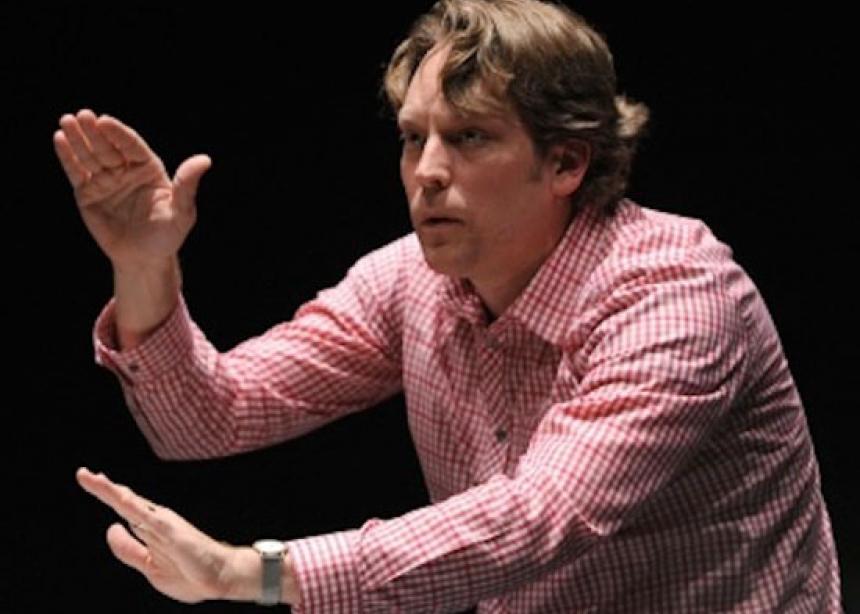 Mark Vuorinen rehearses with his 250-voice mass choir in preparation for the performance of the War Requiem.

At a time when the world is once again gearing up for war, its horrors will be dramatized and brought home in Waterloo Region through an annual three-day international peace conference ending Oct. 19 with a rousing rendition of Benjamin Britten’s War Requiem by a mass choir and symphony.

“The performance is a great testament to the [Second World War] and the peace that has come out of it,” Mark Vuorinen, conductor of the Grand Philharmonic Choir, told a small gathering of friends in the living room of Laura Shantz recently. “The music is extraordinary, taking the ancient Latin text and matching it with nine poems written by soldier/poet Wilfred Owen about his experiences of war.

“The music is so extraordinarily vivid that you feel the coldness of the front lines—making it very visceral and not comfortable with war,” he said. “It’s an eloquent call for peace.”

Vuorinen, newly appointed to the music faculty of Conrad Grebel University College in addition to his conducting du-ties, will lead a total of 250 choristers in this rendition, including the Conrad Grebel and Laurier Singers and a children’s choir singing from the balcony. A youth choir and an extra chamber orchestra and organ, along with the Kitchener-Waterloo Symphony, add other layers of music to the performance.

The idea for capping off the peace conference with a grand musical finale was born about a year-and-a-half ago, Vuorinen told the gathered group, when Edmund Pries, a local realtor/professor, suggested that the War Requiem, thought by many to be the greatest choral work of the 20th century, would be the perfect ending to the event as a way to engage the whole community on the issue of war and peace.

The peace conference, jointly hosted by Conrad Grebel University College and Wilfrid Laurier University’s Department of Global Studies, includes sessions from across a wide range of disciplines, professions and perspectives on issues such as the innovative use of social and communications technology in the promotion of peace, the use of unconventional or unorthodox peace promotion strategies by long-established actors in the field, and the comparative accomplishments of new-versus-old actors in the field of peace and justice studies.

“It will be an occasion for teaching teachers how to teach peace in high school,” said Lowell Ewert, director of peace and conflict studies at Grebel.

Tickets for the Oct. 19 concert, to be held at the Centre in the Square in downtown Kitchener at 7:30 p.m., are available by phoning the Grand Philharmonic Choir office at 519-578-6885. For online registration for the peace conference, visit http://peacejusticestudies.org/conference.

Two weeks before the concert, on Oct. 6, the choir will present a screening of Benjamin Britten: Peace and Conflict, a British-produced docudrama that explores the pacifism that influenced Britten’s life and work, at the Princess Cinema, Waterloo, at 2 and 7 p.m. The screenings will be the film’s first in North America and are open to the public. 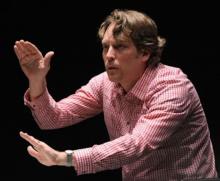 Mark Vuorinen rehearses with his 250-voice mass choir in preparation for the performance of the War Requiem.