Voluntary Service: still thriving in northern Alberta as a ‘presence’

In Canada, such opportunities are still offered via Mennonite Voluntary Service (MVS) Units in Lethbridge, Winnipeg, Montreal, and most recently Edmonton. 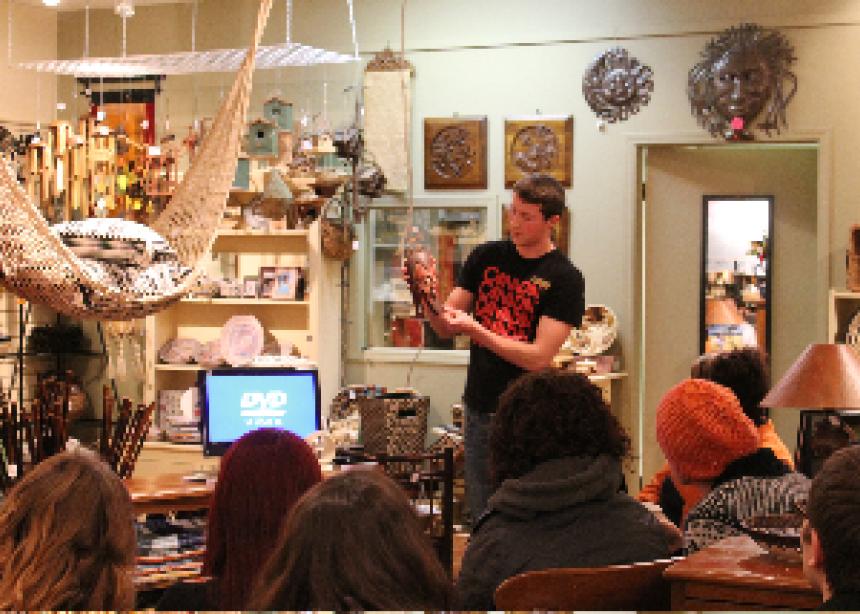 During World War II, the Historic Peace Churches in the U.S. negotiated “Alternate Service” options for Conscientious Objectors (“COs”).  As followers of Jesus, they saw military service as disregarding his example of nonviolence, and his clear admonition to “love your enemies.”

In response, the U.S. Government approved many types of service including reforestation, “smoke jumping,” mental hospital care, and service ministries to address poverty in Appalachia and U.S. inner cities.  These were officially recognized as “Civilian Public Service” (CPS).   The life enriching impact on young adults so engaged, besides the valuable services rendered,  led the churches to continue sponsoring “Voluntary Service” (VS) after the war ended.

In Canada, such opportunities are still offered via Mennonite Voluntary Service (MVS) Units in Lethbridge, Winnipeg, Montreal, and most recently Edmonton.  In more than six decades no incidents of Post Traumatic Stress Disorder (PTSD) have been reported!  The MVS Unit in Edmonton was established September 2011 as a result of two converging interests of the Holyrood Mennonite Church.

The congregation was reaching for ways to enhance its community relevance at the same time it was brainstorming possible uses of its parsonage.  Since recent pastors have chosen to reside “off campus”, the congregation was exploring uses alternate to being a mere revenue rental unit.  The most  favored option, after due diligence, was to house an MVS Unit that would serve in a variety of city service agencies, while also participating in the life of the congregation according to individual gifts.

It’s hardly coincidence that Holyrood’s six member support committee for the VS household is comprised of VS “alumnae” with positive memories of their own experience.  Since the house was unfurnished, except for kitchen and laundry appliances, this became their first order of business.  Amazingly, after preparing a detailed list for the congregation of what was needed, followed by a modified list shared with First Mennonite and the Lendrum Mennonite Bretheren congregations, the five bedroom home was fully equipped within six weeks, including furniture, kitchen utensils, towels, linens, and comforters.  Only about $100 was required for remaining incidentals.

Our first two volunteers have come from Germany, sponsored by Eirene, a German agency.  David Kubovsky serves at Ten Thousand Villages, while Simon Schneider works with residents in one of several L’Arche homes.  Graduate student Chris Lougheed is part of the household this year while recruitment continues for three more agencies, i.e. The MCC Thrift Store, The Mennonite Center for Newcomers (refugees), and Habitat for Humanity. The latter requires someone with construction experience and supervisory aptitudes.  Canadian applicants for these are welcome.

Voluntary Service in Alberta is not new.   Between 1955 and about 1970, nearly 100 young volunteers from across North America embraced a variety of opportunities in mostly Aboriginal communities.  Some taught in existing schools; one assisted several isolated communities to negotiate for schools with the Department of  Education; still others set up and managed a dormitory so children isolated along the NAR (Northern Alberta Railway) between Lac LaBiche and Fort McMurray could attend school at Anzac.

VS personnel became involved in a variety of other “presence ministries”.  This involved nurses, a physician, bush pilots,  boys & girls club organizers, youth leaders, and gardeners, including a trained agriculturist.  Initiatives in socio-economic development were also undertaken to provide local employment and marketing assistance for products derived from bush land resources.

This included Native leather crafts, canoe making, wild berries, fence posts, fish boxes, and chicken crates.  In one community chickens were raised and dressed by ladies for local markets.  In another, they processed wild berries into jams and jellies in 6-ounce jars.  Several men made miniature “dog sleds”, that one of them designed, to become 4-jar gift packs,  In a banner year,  7,000 jars were processed, besides 2.5 tons of  fresh blueberries and cranberries that were shipped to Edmonton markets.

That some also taught Sunday School resulted in a stern warning by a visiting priest in one community to “beware of the wolves that have come among you”.  It was an era of considerable ferment and reform within the Catholic church.  Pope John xxiii had convened the Vatican Council (1962) that had profoundly positive impact both within and beyond his church.  In the same year, Hans Kung, a prominent Catholic theologian, published his controversial “The Council, Reform, and Reunion” in which he ventured that reform must occur within before any hope of reunion with the rest of Christendom can be entertained.

Charles Davis, a  Roman Catholic theologian from Britain, declared himself in “A Question Of Conscience”.  He argued that the Roman church had lost its credibility as “an embodiment of the presence of Christ among men”.  He saw it as an  “obstacle to Christian truth and destructive of Christian love”.  It was amazing, yet truly gratifying, how quickly (without e-mail, facebook or twitter) the influence of Pope John xxiii became apparent in a softening of attitudes even in the hinterland of northern Alberta.

We are told that light is a more efficient medium of communication than sound, that we remember more  of what we see than of what we hear.  No surprise then that the Light of the World was conveyed in the “vernacular” of our existence, so that we could see God’s way of life in human form.  This to help us comprehend God’s intentions about quality of life for the human family.  Voluntary Service, as a “Presence” ministry, has been a means of communicating in the light mode, of giving bodily presence to non-physical values.  In numerous settings of chronic disadvantage, through a variety of services, the good news of God’s caring has been translated into visible actions that offer hope in these situations.

For the volunteer, a VS household provides an experience in group living with a bonus of self-discovery, the former providing immediate stimulus for the latter!  In northern Alberta the learning context was cross-cultural, and the “curriculum” included the art of helping.  There was opportunity for venturing (risk taking) and adventuring (new experience).  For many it influenced lifestyle priorities and subsequent training and career choices.

Part of the legacy of VS has been important learning about helping.  The apprentice must learn that help is not necessarily helpful just because it is voluntary, or because intentions are noble, or because doing things a certain way worked back home.  There’s a cartoon in which a recipient of help is saying: “If things don’t soon improve, I may have to ask you to stop helping me”!  Perhaps the most important discovery is that effective helping, like other forms of communication, involves exchange.  The Church has been described as an organization that exists for the benefit of non-members.  This requires “presence”, and most VS-ers can affirm that both the learning and the benefit flow both ways.