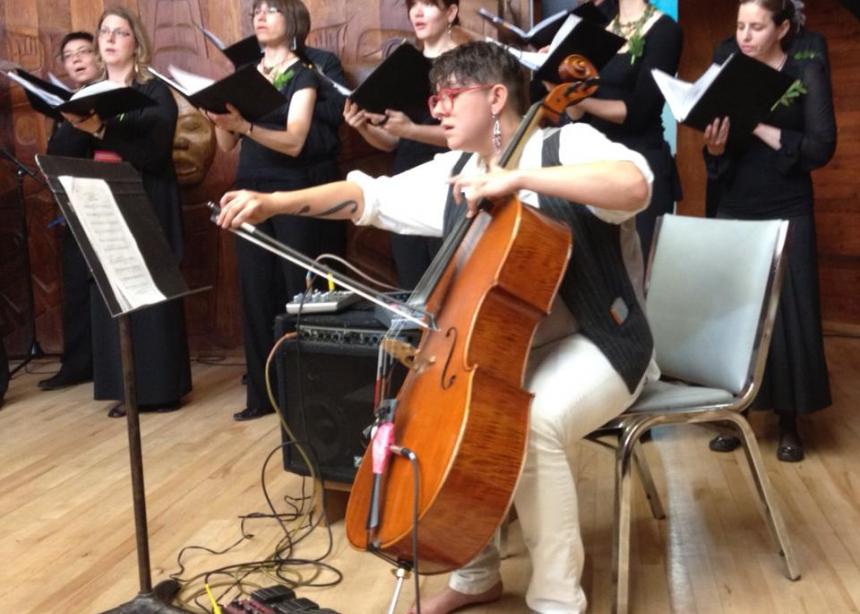 East Vancouver is one of the city's most culturally diverse areas. Thus, it was entirely fitting that Tim Corlis brought his Vancouver Peace Choir there to give a very special concert.

According to their website http://www.vancouverpeacechoir.ca, the Vancouver Peace Choir is “dedicated to the search for inner and outer expressions of peace through music. Its vision is to create a place to experience deep contemplation and to become a source of inspiration for the peacemakers in our world."

The Vancouver Peace Choir lived up to its name on the Sunday afternoon, May 26, when they chose to hold this concert in the Aboriginal Friendship Center. Indeed, they went beyond that. They not only went there to see if their message of peace and music would build a bridge into the community there, would resonate with those who might attend that venue:  Kirsten Wood, a longstanding member of the soprano section, organized and incorporated into the program Cree traditional music integrated with Western choral music. The music performed at this concert was totally unique and only possible because of Kirsten's bicultural understanding, musical gifts, and family connections.

As the choir said in their notes about the program: “We will explore and honour the relationships between indigenous peoples and western peoples here on the West Coast and our shared love for our sacred waters. We will provide a dialogue and offering for how we can co-exist with one another without losing our diverse and important cultures and histories.”

Before Tim and some 25 members of the choir went on to perform, the event began with aboriginal representation including Russell Wallace, of the Lilloet First Nation, delivering the traditional aboriginal welcome.  Kirsten Wood also took part in this and later performed her own songs with the choir. Then, she was joined by her uncle Randy Wood in full Plains Cree grass dance regalia. For part of his repertoire he was joined by bassist James Meger as they accompanied the choir.  He performed some of his own songs with his own drum.

The bridge building did not stop there. Hussein Janmohammed, a Muslim composer and musician, joined both Russell Wallace, the first Nations representative, and the choir, made up mostly of the descendants of European colonizers, including a few of Mennonite background. Indeed, Hussein has worked with the choir as Assistant Director, clinician and composer this past year in Tim's absence.

Another twist on this fantastical theme was the inclusion in the program of cellist Cris Derksen, originally from the La Crete Alberta area - yes, she has Mennonite background as well as Cree. She joined the choir in some numbers and also sang and performed some of her own music, a combination of classical, First Nations and electronic, which has to be heard to be believed. You can get a taste of her style at http://www.youtube.com/watch?v=JXNoNJLKYV8. She is actually currently featured by CBC in their music website lineup.

There was a group of first nation female elder singers in the audience. They were so moved by the whole event that they volunteered to perform the closing song, which was entirely appropriate.

All of this takes place at a time when the Truth and Reconciliation Commission set up by the Canadian government and others is about to come to BC to hold events here this September. Mennonite Church B.C. has also employed an Indigenous Relations Coordinator to help with the bridge building between first Nations and Mennonites. Events such as this, even though this choir is not strictly speaking Mennonite but does have roots in Anabaptism, play a significant role in crossing the divide between the 2 solitudes of the immigrants and the first Nations.

This was something that Tim and Sara became involved with in BC when Tim became acquainted with First Nations elders in his studies. He and Sara then supported their work in the Christian Hummingbird Ministries http://hummingbirdministries.wordpress.com by their performing with them in their Peace through the Arts Festival 2 Years Ago; this last year it was held at Peace Mennonite Church. 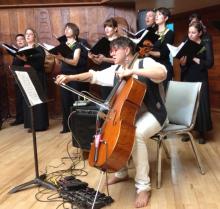 Tim Corlis, back to viewer, Randy Wood on drum and James Meger on bass, with choir.