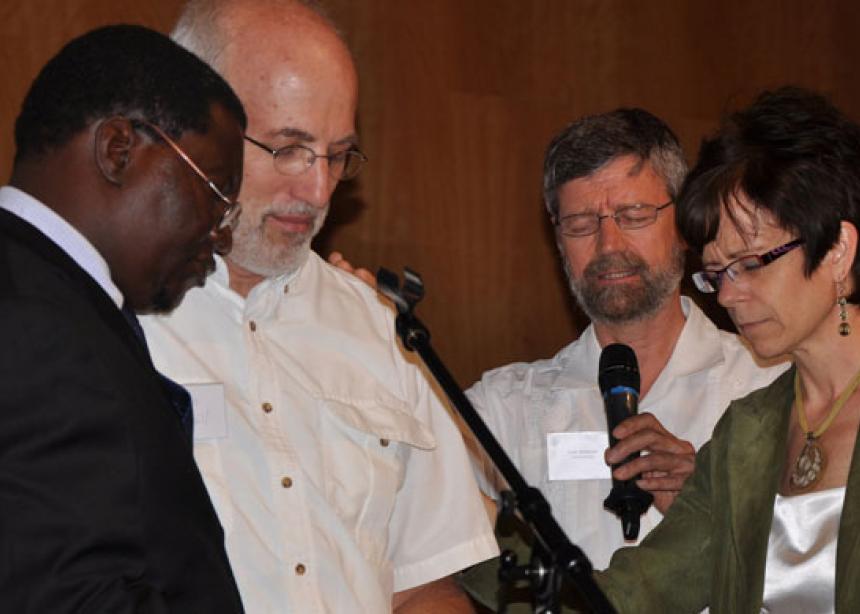 It took three impromptu songs to count the ballots and confirm the results, but Anabaptist leaders from around the world elected J. Nelson Kraybill as president-elect of Mennonite World Conference (MWC) at the organization’s General Council meetings from May 20 to 27 in Basel.

Kraybill is a pastor at Prairie Street Mennonite Church, Elkhart, Ind., and was president of Associated Mennonite Biblical Seminary, Elkhart, from 1996 to 2008. He will replace Danisa Ndlovu of Zimbabwe three years from now at Assembly 16 in Harrisburg, Pa.

“We almost had a tie, but we do have a simple majority,” Ndlovu said of the choice between Kraybill and Markus Rediger of Switzerland.

It is the first time a president-elect has come from outside General Council membership. The MWC constitution had been modified at a previous meeting to allow for a wider field of candidates. Although not a delegate, Kraybill was involved in crafting MWC’s Shared Convictions document.

“I can sense in just the short time I’ve been with you, this has been a worshipful time together,” said Kraybill, who arrived in Europe only a couple of hours before the election. “I think the most important thing we do as Mennonite people is worship and call people together into a relationship with Jesus Christ.

“What an honour and challenge to be called to this role,” he said. “I look forward to learning from you, Danisa. Please be patient with me.”

Members of the MWC Executive Committee and the North American delegation offered prayers of support for Kraybill and thanks for two strong candidates. After the prayers concluded, Rediger made his way up to the stage, where he and Kraybill shared an embrace to thunderous applause.

“In the church there are no losers,” said Ndlovu. “We are all winners in Christ Jesus.”

Much of the continental caucus and delegate sessions were dedicated to discussion of proposed “fair-share amounts” MWC members and associate members are being asked to financially contribute from 2013-15.

Most other fair-share percentages are at or far below 1 percent. MWC tends to receive less than half of the fair-share amounts it requests.

Many delegates expressed deep reservations about meeting the expectation. The proposed amounts were only approved with the inclusion of the possibility for negotiations about individual member’s obligations.

“We recognize that the formula used is not a perfect formula,” said MWC chief operating officer Len Rempel of Canada. “Using one number for a whole country, we recognize that is not the most accurate approach.”

MWC vice-president Janet Plenert of Canada agreed that conditions can vary from region to region in a country, and hoped some members recognized an ability to negotiate a higher contribution. She also noted a widespread desire for a new formula. “We will record carefully that we have heard a significant call for that,” she said.

Departing from traditional procedure, General Council delegates conditionally accepted an invitation from the Asian caucus to host Assembly 17 in Indonesia in 2021. The Indonesian churches asked nine years early—instead of the normal six—to help with their preparations.

An official decision is contingent upon a feasibility study looking at travel, facilities and infrastructure.

“Only if there are significant problems would we go back and change that,” Plenert said.

Tim Huber is associate editor of Mennonite World Review. He wrote this and the accompanying two articles for Meetinghouse, an association of Mennonite and Brethren in Christ publications.

Larry Miller, left, general secretary emeritus of Mennonite World Conference (MWC), and Thobekile Ncube of Zimbabwe hold a quilt that was given to Miller at the MWC General Council meeting in Switzerland in May. Every delegate brought a piece of fabric, and in three days the pieces were assembled.