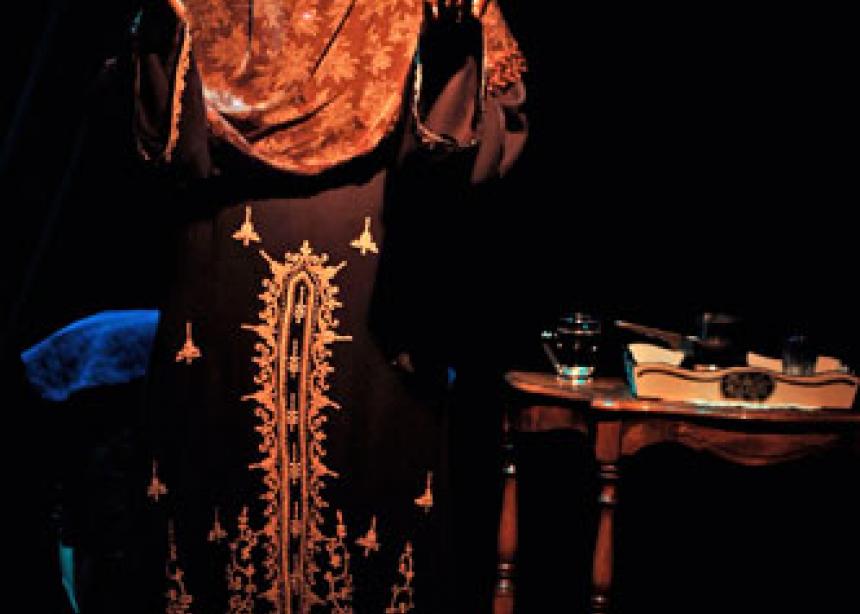 Rohina Malik was 14 when her family moved from London, England, to Chicago. It was there that she lived through—and continues to live through—the misunderstandings about Muslims, veiled Muslim women in particular.

In an effort to change North American perceptions of such women, Malik wrote and stars in her one-woman play, Unveiled, portraying five different veiled Muslim women connected by their lives and tea. Malik brought her play to Conrad Grebel University College on March 30.

The characters include an African American ‘re-vert” to Islam; a midwestern American lawyer whose husband (who converted to Islam) was murdered while she was raped; a restaurant owner whose brother died trying to help victims in the 9/11 attack; an English rapper; and a seamstress who had her experience of her best friend’s wedding spoiled by a verbal attack by another American.

Each one is a strong, independent woman, able to speak of her life and faith, and explain why wearing the veil is a symbol of her submission to God—not to men—very much like conservative Mennonite women wear the prayer covering as a symbol of gelassenheit (yieldedness to God’s will). One character calls on an angry Caucasian to “unveil” his heart in order to see their common humanity.

In his opening remarks, Nathan Funk, a professor at Grebel’s Peace and Conflict Studies Department, said, “Focusing on the peace potential inherent in religious commitment and practice, [Grebel’s Centre for the Study of Religion and Peace] seeks to move beyond one-dimensional conceptions of religion’s relationship to conflict, by exploring ways in which religious teachings and practices can inspire effort to reach out, to encounter, to empathize and to constructively advocate on behalf of one another.”

He said that Unveiled “is directly related to these priorities, and to the idea that whenever our communities are disrupted by anxiety or fear, it is time for us to confront our differences, to discover our much deeper similarities, and come to know one another as neighbours working for a world that is safe for all.”

The mixed crowd stayed after the performance to ask questions, in particular, whether the women portrayed were real women or fictitious. Malik replied that all of them have a historical starting point and are sometimes amalgams of several women.

One perceived shortcoming of Unveiled is its “Americanness,” not because it does not translate to Canadian realities, but because Canadians can tend towards smugness when looking at what they perceive as American issues.

Malik will return to Kitchener, Ont., on June 3, when she will perform at city hall. That event is organized by the Coalition of Muslim Women of Kitchener-Waterloo.