The story of Mzwandile and Cobus

May 22, 2013 | God at work in Us
By Andrew Suderman | Mennonite Church Canada
Pietermaritzburg, South Africa 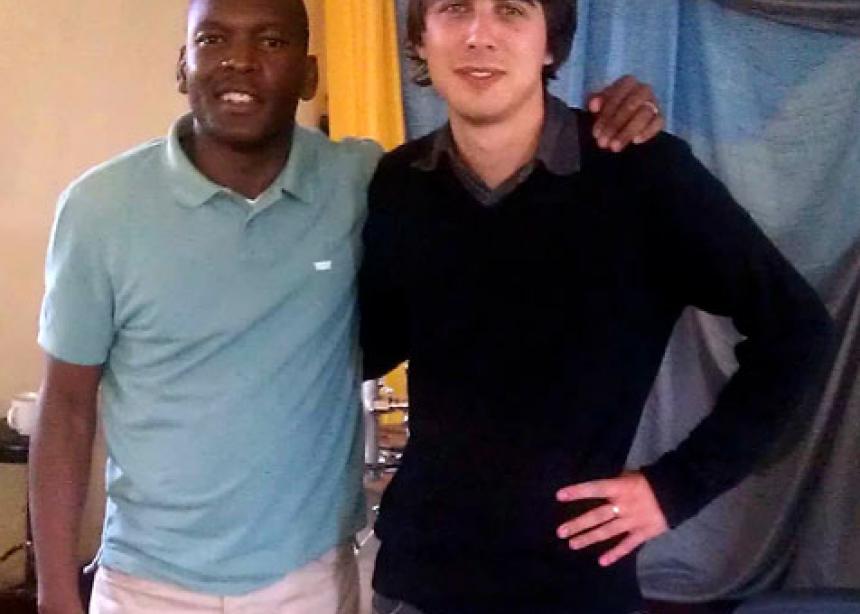 Through the safe spaces provided for connection and discussion by the Anabaptist Network in South Africa (ANiSA) Dialogues, Mzwandile Nkutha, left, and Cobus van Wyngaard are building an unlikely friendship across a history of racial divide.

An unlikely but emerging friendship between Mzwandile Nkutha and Cobus van Wyngaard through the Anabaptist Network in South Africa (ANiSA) demonstrates in a small way what it looks like to overcome deeply rooted racial prejudices in South Africa.

It is an unlikely friendship because Nkutha is a black Zulu and van Wyngaard is a white Afrikaner.

“ANiSA opened up a space where we could talk, share our story, talk about our backgrounds in an honest and open way [more] than perhaps we could elsewhere,” says Nkutha. “It was these spaces that made this friendship possible.”

To fully understand the ramifications of their friendship, one must first understand the history of racial relationships in South Africa, where overcoming racial separation is an ongoing struggle. From 1948-94, racial segregation, introduced by colonialism in the 17th century, stood as the official all-encompassing political system of apartheid.

During apartheid all aspects of South African life and activity were governed by racial categories: black, Indian, coloured (mixed race) and white. For whites, life was one of privilege, and they benefited from the best that the country had to offer. But for other racial groups, especially blacks, life was unfair, unjust and oppressive.

During his formative years, Nkutha grew up just outside of Johannesburg in Soweto, the largest black township in South Africa, while van Wyngaard grew up in Swaziland and South Africa. Although van Wyngaard’s family would explicitly challenge the notions and beliefs of apartheid, as whites they benefited from their place of privilege.

Not only are Nkutha and van Wyngaard racially different, they come from people groups with a long, tenuous and violent past. On Dec. 16, 1838, combat between the Zulus and Voortrekkers, the ancestors of the Afrikaner, left the river near the battlefield running red with blood. The Battle of Blood River is commemorated yearly by Afrikaners because of their belief in “God’s deliverance in that battle.” But it also reminds Zulus of a battle that was a massacre that claimed thousands of lives.

Both Nkutha and van Wyngaard were formed by faith. Nkutha grew up in a black Baptist church, and is now a pastor of a Vineyard church. Van Wyngaard is a dominie (pastor or minister) in the Dutch Reformed Church, which today wrestles with its historic affiliation with the apartheid government and its policies.

Nkutha and van Wyngaard met at the first Dialogue held by ANiSA in April 2011. Sharing and listening to one another’s stories sparked openness between them.

“As we got to know one another, we found ourselves living out a similar story,” says Nkutha. “In our own contexts we have been exploring what it might look like to have the church demonstrate something different within our society. In this way we both have been walking the same journey.”

Both men find themselves moving outside of their theological traditions, discovering common ground within the Anabaptist story, witness and theology.

Nkutha describes the Anabaptist story as one that “takes seriously the life and teachings of Jesus. It is this life and lifestyle that seeks to embody the gospel, a gospel that seeks peace and right relationships with one another. This is the gospel that is needed within South Africa and a world that too often embraces violence in its search for power and control.”

The South African church finds itself in a compromised position given its historic and ongoing relationship with the state. “The Anabaptist story,” says Nkutha, “helps in giving an alternative model as to what it means to live as kingdom political people, instead of tying itself with the political agenda of a particular party or state.”

Initially, van Wyngaard was drawn to Anabaptism because of its strong emphasis on nonviolence. “Anabaptism has provided an alternative way for people to think and believe, new and alternative ways for the church to relate to and approach the state or ‘the powers,’ ” he says, “ways that do not allow the status quo of injustice and oppression to continue.”

“In the new South Africa,” says van Wyngaard, “we are all supposed to like each other. Realistically, however, we are still not supposed to interact with each other. . . . Mere desegregation does not bring about new relationships, a fact that we have been made painfully aware of in South Africa.”

The emergence of Nkutha and Van Wyngaard’s unlikely friendship provides a glimpse of hope in a country searching for such reconciliation.

Mennonite Church Canada workers Andrew and Karen Suderman help to support and grow communities of peace, justice and reconciliation in South Africa. One aspect of their work includes ANiSA Dialogues, which provide opportunities for people to connect with one another in a safe space. 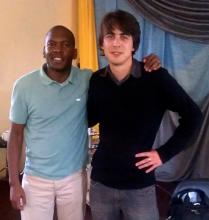 Through the safe spaces provided for connection and discussion by the Anabaptist Network in South Africa (ANiSA) Dialogues, Mzwandile Nkutha, left, and Cobus van Wyngaard are building an unlikely friendship across a history of racial divide.