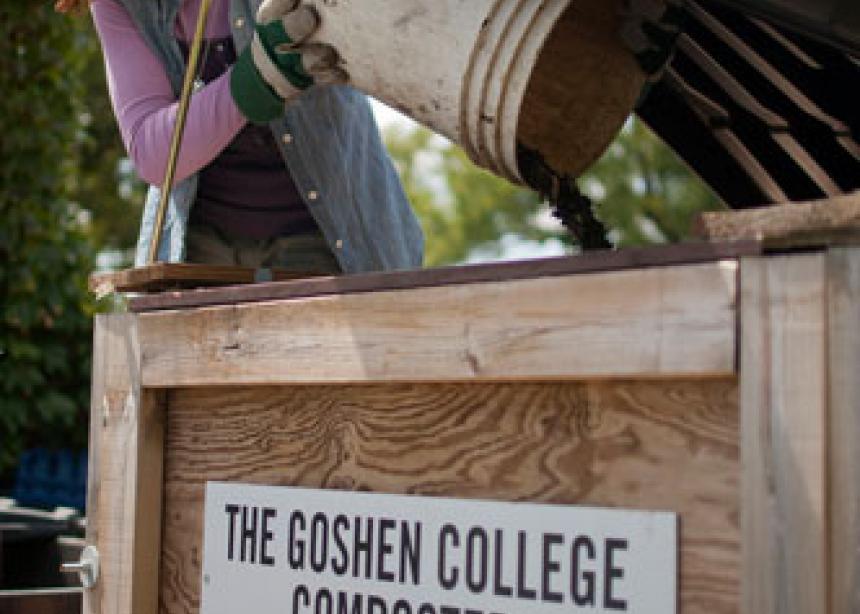 Where might you find coffee grounds, potato skins and egg shells mixed with meat, napkins and leftover spaghetti? Typically, beside other garbage in the dump. In fact, for years, this is where Goshen College sent its food waste.

However, in 2010 the college implemented a new practice, taking something perceived as “dirty trash” and transforming it into something of value: compost.

But Natasha Weisenbeck, a junior majoring in public relations who has volunteered with the student compost team for three years, figured out a way to greatly improve the college’s approach.

Weisenbeck (pictured at right) identified the need for a better compost screening solution, so she designed a system that made it easy to separate the final product from the woodchips that are combined with the food waste: a pivot screener hangs on a 20-degree angle allowing the compost waste to fall through the screen and be collected, while the woodchips tumble to the end. This cuts the time to separate the compost from the chips in half and creates a better quality final product.

A benefit of the simple approach is that it is cost-effective, with just an eight-month payback. This is the result of using student labour and a reduction in garbage bags and landfill costs. The composting boxes only cost about $150 in materials to build, while composters that use electricity are as much as 10 to 100 times the cost. Between waste pickup fees and garbage bag savings in the kitchen, the college saves an estimated $1,800 per semester.

On a typical weekday during the semester up to 45 kilograms of food waste are produced in the college’s dining hall. When students are done eating, they have the option to scrape fruit, meat, napkins and any other compostable waste from their plates into waste receptacles clearly designated for composting.

At the end of a day, a student volunteer collects the receptacles and dumping all of the contents into the campus compost bin, a large insulated wooden box located behind the dining hall dumpsters. Woodchips that are received free from local tree trimmers are added as mulch and combined with the food waste at a two-to-one ratio to provide airflow. This introduces bacteria to the food, which prevents odours and helps break up the pile.

On-site composting lasts for at least three weeks. Decomposition continues for up to three more months prior to the screening process, during which the woodchips are separated and removed, using Weisenbeck’s pivot screener.

The cycle is complete when the compost is returned to the college’s dining service to be used as a natural fertilizer in its small garden, which eventually produces vegetables and herbs for meals to be served to students.