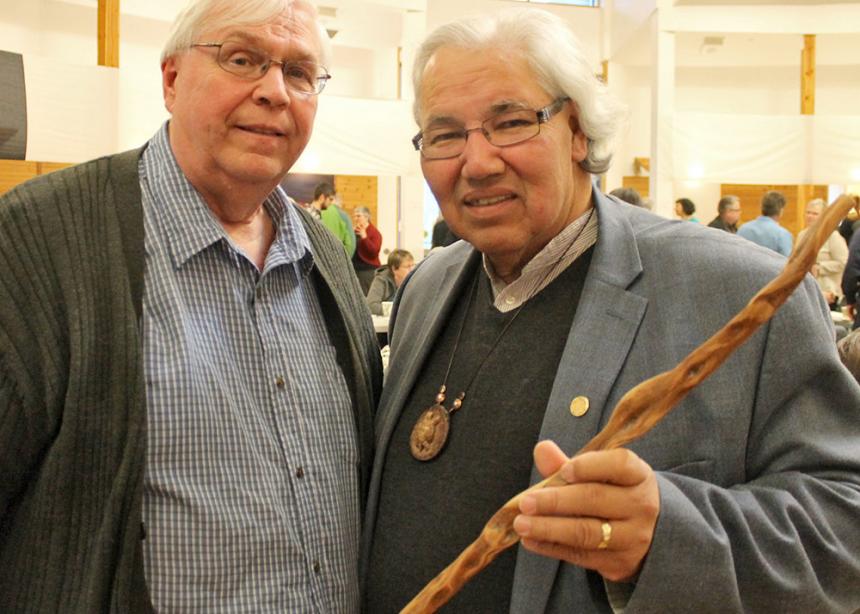 Justice Murray Sinclair proudly and lovingly put his arm around Sarah, his granddaughter. “Tomorrow is one of the most important days in my life, the birthday of my granddaughter,” he said of the eight-year-old. “Many of the children taken from families and placed in residential schools were even younger than this. Whenever I do my work, I think about her. We must ensure when we go forward that it will never happen again for little people like this.”

Sinclair, who has completed the last of seven Truth and Reconciliation Commission (TRC) national events, was back in Winnipeg, where it all started five years ago, to talk to the Mennonite church community about what comes next in the journey towards reconciliation.

Invited by Mennonite Church Canada and MC Manitoba for their annual Building Bridges event, Sinclair spoke articulately and candidly to his Mennonite audience at the Circle of Life Thunderbird House on April 25, where he presented them with some difficult challenges. He received a standing ovation, but not because he left his listeners with a “feel good” message.

Sinclair was appointed as chair to the TRC in 2009, the independent body whose mandate was to study and report on the history and legacy of the Indian Residential School system in Canada and discern a process for reconciliation. For five years, he and two other commissioners listened to 7,000 residential school survivors relate their experiences. They are now required to write a report telling the full and complete story of residential schools in Canada, educate the public and engage in a dialogue about reconciliation with government, churches and survivors.

It is a daunting task that has already taken its toll. The three commissioners have all faced medical challenges over the past five years, “and we will continue to bear the heavy burden of consequences,” Sinclair said, adding that the three decided at the outset they would follow three rules: “Take care of ourselves, which included our spiritual health; then take care of our families, because we knew they were the ones who would see us through this process; and, thirdly, take care of the work. We believed it was sacred work from the very beginning.”

Sinclair said he learned from a victim of the Rwandan genocide that the process of forgiveness is ongoing: “He said, ‘The hardest part is that every morning when I wake up I have to do it all over again.’ That’s what reconciliation is about. It has no ending, no place of arrival. It’s a constant everyday battle and you can’t stop the process, because if you do you are back at the beginning.”

Sinclair stressed the importance of settler groups coming to terms with their relationship to indigenous people. “It has to be done right,” he said. “If it is done wrong, it will perpetuate the blindness, the conflict and the power imbalance. . . . The role of the churches is to encourage their congregations, their people to participate in the conversation, to keep the dialogue going when the commission is over, and to take a look at the practices that each of the faith groups bring to the conversation, to see if there is something about the way their practices are founded that might need to be changed and reconsidered.”

“How do we reconcile? Is reconciliation possible? If you’ve never had conciliation to begin with, what are you returning to when you reconcile?” Sinclair asked his audience.

He said mutual respect and restoring self-respect to indigenous people is a good place to begin. “The identity of aboriginal children, knowing where you come from, your teachings concerning faith and life were all denied to us, and this is still perpetuated today,” he said. “We need to talk about that. You must understand that that which has been lost must be found, that which has been taken must be returned, that which hurts must be healed. Negative attitudes must be altered.”

“Churches have to make statements of respect for indigenous people and indigenous spirituality,” Sinclair said. “Christianity is not the only answer. As Desmond Tutu said, ‘God is not a Christian.’ Reconciliation is not about furthering the assimilation process. Respect must be stated and shown. It’s how we talk to, and about, each other and each other’s belief systems. Social needs are still important, and you need to keep doing that because you do that well, but don’t just concentrate on social welfare, but recognize and support indigenous people as people, too.”

“Is it possible for churches to make a statement acknowledging aboriginal spirituality as valid and as an equal means of worship?” Sinclair asked. “Can you do it? If not, the relationship will be as bad as the existing one.”

“Children are the means to reconciliation,” Sinclair concluded. “We can set the tone, but it will not occur in our lifetime. It took a long time to get here and it will take a long time to fix, but the children are ready for it.”

For more on the TRC see: 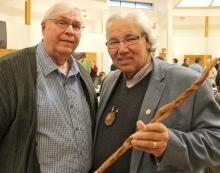 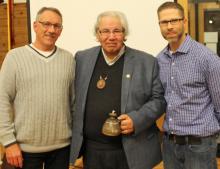