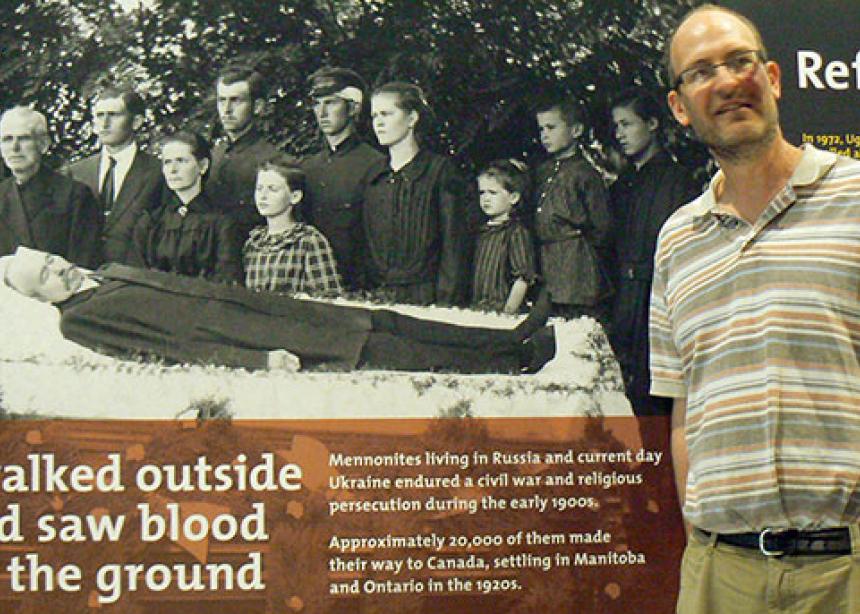 I have always appreciated hearing stories of refugees to Canada, so I eagerly joined our St. Jacobs Mennonite Church seniors group on its trip to Doon Pioneer Village and the Waterloo Region Museum, with its special summer exhibit, “Torn from home: My life as a refugee.” I entered the exhibit interested to learn more and left with a stark reminder of how close to home these stories actually are.

Almost immediately I was struck by the personal connections that I was making. The first panels told the story of escaped black slaves settling in Ontario in the mid-1800s. The previous Saturday I had taken the Mennonite Historical Society of Ontario bus tour to the Glen Allen/Yatton area, where my friend Timothy Epp has researched Mennonite/black interaction.

I moved next to a recent Mennonite Coalition for Refugee Support video, which told the story of Maria Alejandra Posada Arcila, a Colombian high-school-age refugee claimant to Canada. She has received much support in this process from Lynn Schulze, my direct neighbour across the street. Both Schulze and Arcila shared on the video about the tough situation in Colombia and what it means to live in Canada, with the fear of being sent back because Canada considers Colombia a “safe country.” I recently wrote a letter of support for Arcila’s refugee claim.

I had just finished watching the video when out of the corner of my eye I caught a photo display ahead. I commented out loud to the seniors around me: “Up there is one of those Russian Mennonite photos. You can tell because there is a dead body in an open casket, with the rest of the family standing behind for a family photo.”

It was a tradition in that branch of Mennonites. Since photographs were rare, they would take full family photos at a funeral.

As we moved closer, I began to read the accompanying story panel and commented again how typical a story this was of Mennonites in Russia in the 1920s, a time of civil war, unrest and much persecution of Mennonite villages.

It was when I saw the name at the bottom of the display—Peter Neufeld—and the source of the display: Dave Neufeld—that it suddenly clicked. I burst out, “That is my great-grandfather lying there in the casket!”

Indeed it was. This was my family’s story that my opa (grandfather) Cornelius K. Neufeld told me as I sat beneath the cherry tree on their Niagara fruit farm. Opa recalled how word got out that their family was going to emigrate (escape) to Canada and might have money.

During the Russian Revolution, prisons had been opened and bands of armed men roamed the countryside. These bandits showed up at their farmhouse, knocked out brother Willi (notice the bandaged head in the photo), and shot my great-grandfather, who died the next day. My opa hid on his knees and prayed. A few weeks after burying their father, the family left for Canada. This is my family refugee story. This is close to home!

There were more connections. The Laotian/Hmong stories of the 1980s included a photo of several Hmong church members taken at First Mennonite Church, Kitchener, where I have also pastored. More recent stories were of Palestinian refugees who came through Syria, like the family recently sponsored by our congregation.

I was struck by how much refugee stories have shaped the history and present reality of Canada. Later, I saw the display of Canada’s first nations peoples, the only group not refugees to Canada, and yet so often displaced. This, too, is a big part of my family story through my sister Kristen.

The refugee stories of being torn from home are horrific and unimaginable, and yet they are closer to home than we think. I left the museum with a profound sense of wonder and awe, and of a deep thanksgiving that cannot help but lead to compassion. l

Mark Diller Harder is a member of the pastoral team of St. Jacobs Mennonite Church, Ont.