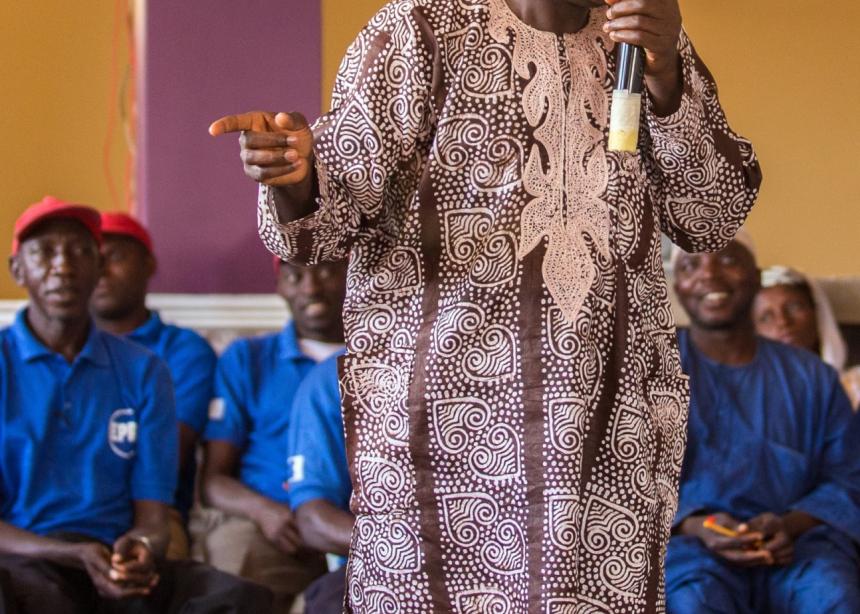 MCC Nigeria peace coordinator Mugu Zakka Bako speaks at a meeting for Emergency Preparedness Response Teams in Barkin Ladi, Nigeria. Bako and response-team volunteers were at the scene of the recent bombing in Jos, ready to address signs of violence. (MCC photo by Dave Klassen)

When Mugu Zakka Bako arrived at the scene of twin bomb blasts on May 20 at a busy market in the city of Jos, Nigeria, he saw more than the destruction and injured people.

He saw Muslims and Christians working shoulder to shoulder helping to rescue people from the debris. They consoled and talked with each other, said Bako, peace coordinator for Mennonite Central Committee (MCC) Nigeria.

“If not for the peace work that has been taking place in Plateau State [Jos is its capital] over the last number of years, this kind of incident could easily have erupted into religious violence,” said Matthew Tangbuin, MCC Nigeria’s program advisor and business manager.

Tangbuin is referring to intensive peacebuilding work that many groups in Jos, including MCC partners, are doing to diffuse violence and encourage connections between Muslims and Christians.

Plateau State lies in an area between Nigeria’s largely Muslim north and the predominantly Christian south, and is home to diverse religious and ethnic groups. The attack that killed 122 people was the first large-scale incident of violence in Jos over the past two years.

MCC staff and its partners are safe, although several witnessed the explosion. Others were close enough for debris to fall on them outside the MCC office, which is about a half-kilometre from the explosion. Many people connected with MCC knew someone killed or injured in the blasts, some spending hours searching through charred bodies to find loved ones. Seven volunteers working for MCC’s partner, Faith Alive Clinic, were killed or are presumed dead.

Although no group has claimed responsibility for the attacks, people in Jos commonly attribute it to Boko Haram. This group of Islamist militants, who oppose education for girls and other western influences, got worldwide attention in April after abducting and threatening to sell more than 270 school girls in northeast Nigeria.

For the past 20 years, however, the periodic violence that plagued Plateau State was not commonly tied to Boko Haram, but to a complex set of factors based on the way people polarize religious and ethnic groups to advance their political purposes in Nigeria, said Mary Lou Klassen, peace theology teacher.

“Whenever there was an attack in a particular place, people from other areas started killing innocent ones without verifying the cause of the conflicts,” noted Bako.

But Dave Klassen, MCC representative in Nigeria, said people are tired of the violence, which may make them more determined to work for peace and more open to listening to their friends who discourage a violent response. “People have a united front against Boko Haram,” he said.

One of MCC’s largest partners, Emergency Preparedness Response Teams, has created a web of volunteers across Plateau State trained to recognize growing tensions and diffuse them. At the bombings in Jos, volunteers were there, many in an official capacity as first responders, Dave said. Yet even as they worked to save lives or direct traffic, they were alert for signs of follow-up violence.

MCC’s peacebuilding work has been a priority in Nigeria since 2001. Primarily, MCC works behind the scenes, and has sent more than 35 Nigerians to peacebuilding training to learn about topics such as conflict prevention, trauma healing, restorative justice and advocacy.

“Many have come back dramatically transformed,” Dave said.

No one can draw a definitive line between the ongoing peacebuilding work of many organizations and the lack of violence following the bombings, Dave said. Yet the peaceful response is hopeful for Nigerian peacemakers. 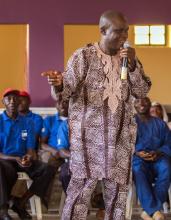 MCC Nigeria peace coordinator Mugu Zakka Bako speaks at a meeting for Emergency Preparedness Response Teams in Barkin Ladi, Nigeria. Bako and response-team volunteers were at the scene of the recent bombing in Jos, ready to address signs of violence. (MCC photo by Dave Klassen)