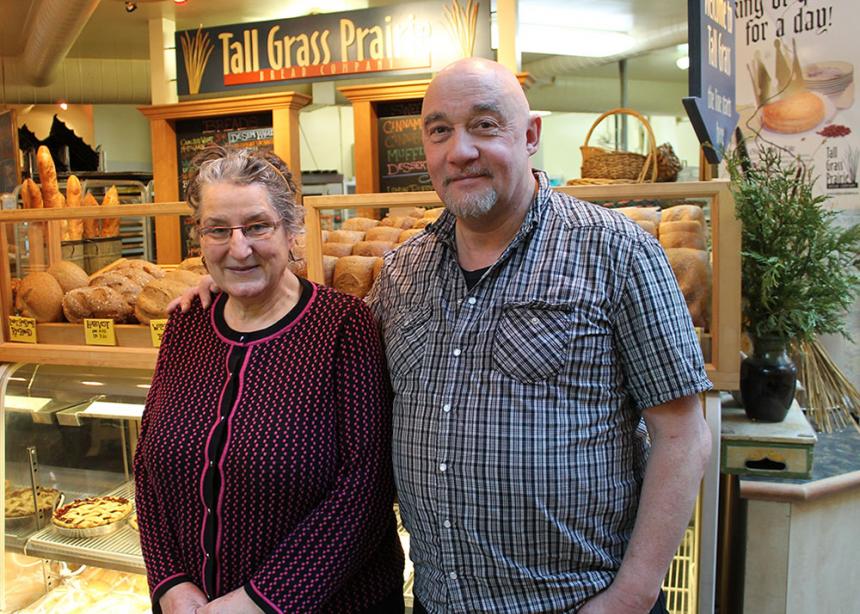 Tall Grass Prairie Bread Company is well-known in and around Winnipeg for its gooey cinnamon buns and its organic local baking and preserves, suffusing the marketplace at the Forks and its Wolseley neighbourhood with the aroma of fresh baking.

As Paul and Tabitha Langel sit down to enjoy some of the homemade soup from their Tall Grass Bakery at the Forks, they describe the journey they embarked on nearly three decades ago with their church community and their business partners, Lyle and Kathy Barkman. They don’t highlight the long hours, the incredibly hard work, or the surprising twists and turns, but rather the critical role of faith, prayer and the support of their faith community on this journey.

Tabitha, a former social worker, and Paul, a former teacher, are long-time members of the Grain of Wheat Church-Community. In the late 1980s, the church was studying food and land issues.

“Back then, farmers were still getting the same price for a bushel of wheat that they got a hundred years ago,” Tabitha recalls. “A record number of small farms were being sold and agri-business was taking off.”

A small bread co-op grew out of the church’s concerns and its desire for a more communal life in its neighbourhood. It used a local church’s kitchen and baked bread every Saturday morning. The group of bakers decided to invest in a mill and purchase grain directly from local organic farmers. ”We did this for philosophical reasons, but none of us were prepared for how much better the bread tasted,” says Tabitha.

“The demand for the bread became too overwhelming,” she says. “We were baking up to 100 loaves on Saturday and on Wednesday I baked another 60.”

People began to question whether they should try to form a business and support more farmers, eventually bringing the issue to the church community.

“A group of five of us solidified with not a single business course between us,” says Tabitha, whose resolve for an ethical loaf of bread never wavered.

When the bank would not give them a loan to purchase a bakery, many in the bread co-op lent them money and they took out personal loans.

“We had a vision for a dreamy kind of neighbourhood bakery,” Tabitha recalls.

They would all keep their part-time jobs.

“But nobody had prepared us for success,” says Paul. “On opening day, there were at least 200 people and they had baked only 30 loaves of bread, a few dozen muffins and two-dozen cinnamon buns.”

At its fifth anniversary, Tall Grass Prairie decided to throw a party and invite all the farmers. About 400 people came, and when the farmers were introduced, people cheered. The farmers were visibly moved.

“We never had any idea that the bakery would grow into a medium-sized business,” says Paul.

Together with the Barkmans, who work at the Wolseley site, they employ nearly 60 people. From the beginning, the bakery has always been about doing what is just and what is good for the land and for the people.

“Our philosophy is hugely shaped by the community and our faith,” Paul says. “It is a challenge how to be fair to everyone, to ensure that farmers and everyone get paid a fair living, and that we still make a decent living.”

Tall Grass Prairie farmers get 14 cents for every loaf, and every couple of years Tall Grass staff try to visit their farm suppliers.

“By far the greatest challenge as owners is to stay on the same page, stay honest and still meet for communion with each other on Sundays,” says Paul. “Any time human beings do things this intense together, there are rough stretches.”

To get them through those stretches, the partners have relied on the help of mediation whenever they felt the need. They have also relied heavily on their church community.

Twelve years ago, when they were invited to open at the Forks, a stipulation was that they had to be open on Sundays. Their church community encouraged and supported them in this.

“It has proven to be the right decision, but it has also been a strain,” Tabitha says. “I knew a rabbi whose family shops here and he told us, ‘Remember God made the sabbath for us and not us for the sabbath.’ Eleven years later, it still is a challenge.

“The rabbi came by a while ago,” she adds, “and said, ‘I hear you miss church many Sundays. Private prayer and praying with your people are two different things, so my daughter is coming to work on Sundays so you can go to church.’ That germinated the idea that we would experiment with scheduling our Muslim, Jewish and Christian employees according to their religious days. So now we have a Jewish baker who bakes on Sundays. It has made a lot of difference.”

“It is never not a struggle to live your faith in the workplace,” says Paul.

“But the joy is immense,” Tabitha hastens to add. “There is respect in the workplace. You get a sense the staff enjoy coming to work. We guard the culture of the workplace very carefully.” 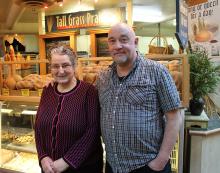