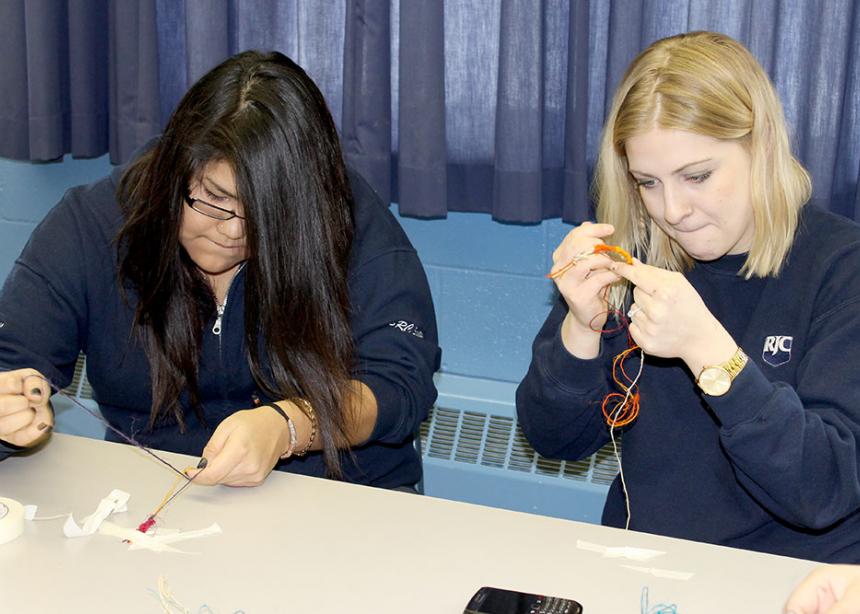 They had only 20 minutes to create a skit based on a Bible text and a box of props. It was “creation care” up close and personal for the students and staff at Rosthern Junior College (RJC), who took time from their academic schedules to examine their attitudes and habits affecting the environment.

Nov. 28, 2013, began with an examination of biblical and theological foundations for creation care. Organized by the school’s Faith and Life Committee under the guidance of teacher Ryan Wood, the event was dubbed the Youth Environmental Stewardship and Sustainability (YESS!) Summit.

“Isolationism is what’s gotten us into trouble,” Wood said in his introduction of the day’s theme to their guests, stressing the importance of reaching out and connecting with one another. Wood had participants find someone they did not know and identify three things they had in common with each other.

Students chose from 11 workshops with topics ranging from “No waste Wednesdays” and “Natural building options” to “Climate solutions: Achieving local sustainability.” Some students opted to tour the local recycling facility or the Rosthern Waterworks. Others learned about making “Fair trade and earth-friendly Christmas gifts” with Carol Reimer-Wiebe, manager of the Ten Thousand Villages store in Saskatoon.

Still others participated in a student-led discussion forum entitled “Why should I care?” The “Living in rhythm with the earth: A drumming workshop” featured the talents of the Vincent Massey Community School Drumming Group from Saskatoon.

After the final workshop, students began to process what they learned in small-group brainstorming sessions. The day culminated when the large group reassembled and students shared their responses to two questions:

• What are we already doing well?
• What could we do better?

The students’ written responses became part of a large wall mural. At the close of their time together, students were asked to sign their names on the mural beside one of the responses, thus committing to making one small personal change.

Satisfied that he had accomplished his goal for the day, Wood said it is easy to think of stealing, for example, as sinful. While over-consuming is not always seen as sinful, he called it “a rot that has gotten away on us.”

The Faith and Life Committee chose the word “stewardship” intentionally as part of the event’s title. Although not part of most teenagers’ vocabulary, the word is used in biblical texts pertaining to caring for the earth and is a word that carries with it the idea of moral responsibility.

“RJC is a Christian school,” said Wood. “That is our brand and we can’t shy away from it.” He said the school is “unapologetically Anabaptist” in its approach to creation care.

As to whether the event will result in changes on campus in the weeks ahead, Wood said he anticipates lots of discussion and that students will be more critical and more vocal in challenging inconsistencies that they see around them, adding that experiences such as this often bear fruit much later in an individual’s life.

What would he like to see the students take with them at the end of the day? In a word: “hope.” “God is continually renewing the church, nature and the world,” he said, hoping himself that students will come to believe that it’s not too late to make
changes. “We have to be a people of hope.”

Vincent Massey Community School Drumming Group from Saskatoon, led by principal Ian Wilson, right, were featured in a workshop entitled ‘Living in rhythm with the earth.’

RJC students Jenae Funk, left, and Mackenzie Nicolle express their hopes for the earth on construction paper leaves, which were later added to a large wall mural.

Students in the “Natural building options” workshop, presented by Jesse Ens of Rosthern, Sask., work together to construct a model timber frame house with cordwood walls. 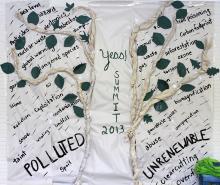 The YESS! Summit wall mural created by students depicts their hope for restoration and renewal of the earth. 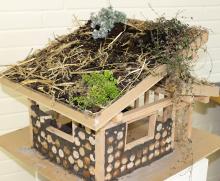 A completed model timber frame house with cordwood walls and a living roof, constructed by students during the YESS! Summit held at Rosthern Junior College on Nov. 28.