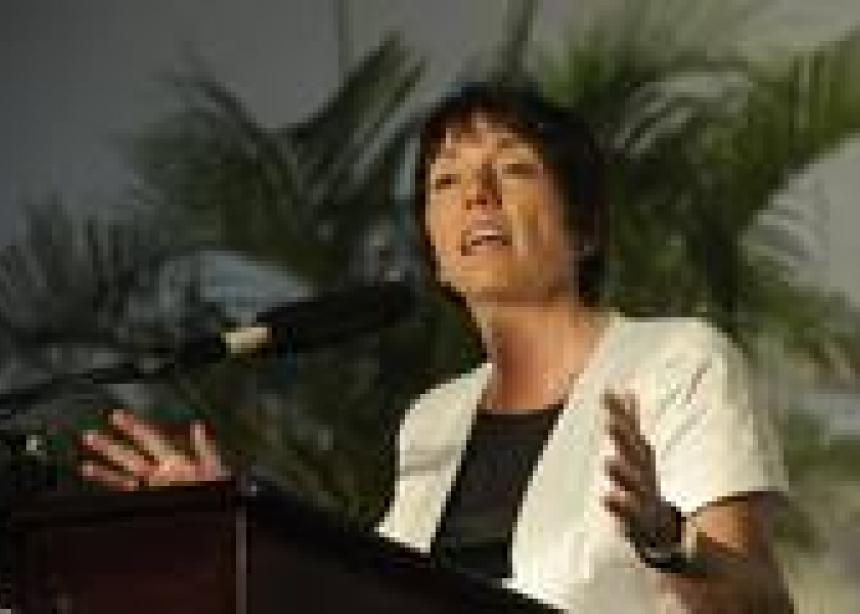 Rev. Dr Margot Kaessmann: "It is time that religion refuses to be misused by pouring oil into the fire of war and hatred.”

The International Ecumenical Peace Convocation (IEPC) formally opened here on May 18 as theologians, faith leaders and the prime minister of Jamaica welcomed some 1,000 participants from more than 100 countries.

Keynote speaker Canon Dr Paul Oestreicher, a globally recognized peace activist, called for churches across all spiritual traditions to strengthen their position on peace, even while recognizing their own history of declaring war in the name of God.

“Under the sign of the cross, Christian nations conquered other nations,” he said. “In the crusades, they massacred the children of Islam. That has not been forgotten. We, just like our brothers and sisters in Islam, regard those who die in battle as certain of a place in heaven.”

Oestreicher acknowledged that the path to peace is obstructed by political complexities.

“At the moment war, once it starts, is held by most of our neighbours to be honourable, probably necessary, and sometimes noble. Language disguises the bloody, cruel reality,” he said.

“I believe that God has called us here from many parts of the world to carry from your countries your experiences,” he said. “Many of you carry with you the realities of the injustice of violence.”

Those from the Caribbean region and Jamaica welcomed IEPC participants, many of whom were visiting Jamaica for the first time.

Jamaican Prime Minister Bruce Golding acknowledged his own country's history of violence and, at the same time, its ingenuity and resilience in coping over the decades.

“I genuinely believe that we were all created by the same God,” he said. “The challenge is: how can we transform our discussion into a shared set of values that are universally accepted and sustained.”

Theologians began asking the questions that IEPC participants will wrestle with during the next week. Archbishop Metropolitan Hilarion of Volokolamsk, chairman of the department of external church relations of the Russian Orthodox Church, spoke of Christians and others across the globe who are daily exposed to humiliation and threats.

“The principle question we have to answer is what we as Christians can do together in the face of growing violence, aggression, exploitation and terror,” he said.

The IEPC comes at the end of a Decade to Overcome Violence, an initiative of the WCC that strove to strengthen existing efforts and networks for preventing and overcoming violence, as well as inspire the creation of new ones.

The Rev. Dr Margot Kaessmann, a Lutheran theologian and minister in the Evangelical Church of Germany, said that IEPC participants are part of a long and complex journey that only begins this week.

“Our economies profit from violence and war that we lament,” she said. “Religion plays a vital role with regard to peace-making and overcoming violence. It is time that religion refuses to be misused by pouring oil into the fire of war and hatred.”

Rev. Dr Margot Kaessmann: "It is time that religion refuses to be misused by pouring oil into the fire of war and hatred.”